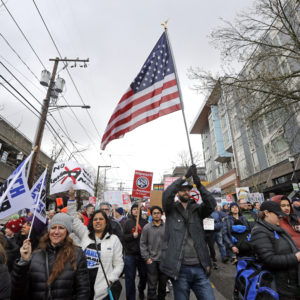 Protesters fill a street during a march in favor of gun control Saturday, March 24, 2018, in Seattle. (AP Photo/Elaine Thompson)
[IS] Opinions

What Does ‘Well Regulated’ Really Mean?

The interpretation of two words should be simple, shouldn’t it. On the surface, the answer is yes. Except, in this case, this surface can be a bit on the thorny side because we are talking about the Second Amendment.

And the two words are: “well regulated.”

The 27-word amendment reads: “A well regulated Militia, being necessary to the security of a free State, the right of the people to keep and bear Arms, shall not be infringed.”

What were the Founding Fathers alluding to in this context? A context that appears ambiguous and ambivalent, at best, as if the wording contains a misplaced comma, or is missing a conjunction, such as a “but” or an “and.”

We live in a climate of polarization regarding a litany of people, places and things. So why not word polarization, too.

Again, what is the meaning of “well regulated”?

Dr. Robert J. Cottrol is the editor of the book “Gun Control and the Constitution: Sources and Explorations on the Second Amendment.” And Cottrol, a Second Amendment expert and legal historian, is the Harold Paul Green Research Professor of Law at George Washington University. He says the words “well regulated” refer to proficiency and top-notch training.

“This was written at a time when there was relatively little in the way of formal training in marksmanship on the part of armies and usually less on the part of militias,” Cottrol said. “The idea was that familiarity gained with weapons in private pursuits would translate into a militia that could be mobilized when needed.”

Are the two words applicable to guns?

But the power and absolutism commonly associated with the Second Amendment doesn’t seem to sway the skepticism espoused by two influential former U.S. Supreme Court justices.

On the Tuesday following the “March for Our Lives” rally on March 24 in Washington, former Supreme Court Justice John Paul Stevens, writing an eight-paragraph commentary for the New York Times, argued that students and pro gun-control protesters should seek a repeal of the Second Amendment.

Stevens, who turns 98 on April 20, wrote, in part, “Concern that a national standing army might pose a threat to the security of the separate states led to the adoption of that amendment . … Today that concern is a relic of the 18th century.”

In fact, the resolute Stevens advocated curbs on the Second Amendment in previous writings, such as in 2014, with the release of his book, “Six Amendments: How and Why We Should Change the Constitution.” In one essay, he posited that a “well regulated Militia” is an anomaly.

And there’s Warren Burger, who served as chief justice of the Supreme Court from 1969 to 1986. During an interview with correspondent Charlayne Hunter-Gault that aired Dec. 16, 1991, on PBS’ “The MacNeil/Lehrer Newshour,” Burger essentially asserted the Second Amendment was antiquated, an anachronism — especially that “well regulated Militia” part.

When Hunter-Gault asked Burger what measures would make the Bill of Rights better, he went off.

A fiery Burger told her: “If I were writing the Bill of Rights now, there wouldn’t be any such thing as the Second Amendment, that a ‘well regulated Militia’ being necessary for the defense of the state, that people (have the) right to bear arms. This has been the subject of one of the greatest pieces of fraud, I repeat the word fraud, on the American public by special interest groups that I have ever seen in my lifetime.”

And Burger, who died in 1995, wasn’t finished: “Now just look at those words. There are only three lines to that amendment. A ‘well regulated Militia.’ It’s the militia which was going to be the state army, was going to be well regulated. Why shouldn’t 16, 17 or 18 year olds, or any other age persons, be regulated in the use of arms, the way an automobile is regulated? …”

The ironic part of this extraordinary assault on the Second Amendment by two former Supreme Court justices is that they were both appointed by Republican presidents — Burger by Richard Nixon in 1969 and Stevens by Gerald Ford in 1975.

Asked whether the Second Amendment should be repealed, Professor Cottrol responded with a resounding “No.”

“Because I believe the Second Amendment protects a very important right,” Cottrol said. “The most fundamental right we have is the right to self-defense. If that right can be taken from you, then all other rights become meaningless.”

Nevertheless, remember this sobering bit of lingering news of ignominy:

According to Newsweek, in the five years and three months since the Dec. 14, 2012, massacre at Sandy Hook Elementary School in Newtown, Conn., approximately 7,000 children have died by gunfire. Since the U.S. war on terror began after the Sept. 11, 2001, attacks, 6,929 military troops have died (as of March 15). That figure was compiled by the Department of Defense.

Unlike the Second Amendment, both statistics are accompanied by clarity.