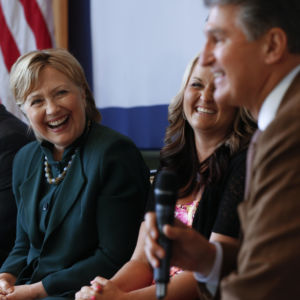 Looking at the results of the 2016 presidential election, it is hard to find a state more red than West Virginia. Donald Trump beat Hillary Clinton by some 41.7 percent, managing to build on Mitt Romney’s 27-point victory in 2012. These are sobering numbers for Sen. Joe Manchin, perhaps the most vulnerable Democrat up for reelection in 2018. While the last of the 2016 postmortems and victory laps haven’t even ended yet, Republicans are already looking for a candidate who could potentially flip Manchin’s seat.

West Virginia’s Republican Attorney General, Patrick Morrisey, was in Washington, D.C. earlier this month to meet with top GOP lawmakers about potentially challenging Manchin in 2018. Republican hopes in the state are high after Shelley Moore Capito became the first Republican elected to the Senate from West Virginia since the Eisenhower administration.

While it is difficult to predict how the race will develop two years out, it currently appears the Republican nominee in 2018 will face a politician who, so far, remains popular at home. Polling from Morning Consult has Manchin at a 57 percent approval rating, with 30 percent of voters disapproving.

“Manchin remains among the most popular politicians in the state, in large measure because of his opposition to President Obama regarding the coal industry,” says Mike Myer, a columnist for the Wheeling Intelligencer. Manchin has found a secure position in the Senate as a Democrat who serves the interests of his state first and party discipline second.

Still, Manchin’s popularity dipped this past year when EpiPen price hikes dominated the news cycle. His daughter, Heather Bresch, is CEO of the company which manufactures the drug. Accompanying this are broader accusations against the Manchin family for abusing its power, as Manchin’s wife, Gayle, who was the head of the National Association of State Boards of Education, pushed for states to require schools to stock EpiPens, according to USA Today.

Bresch is now facing more challenges as her company confronts a separate civil lawsuit spearheaded by 20 U.S. states for its part in an alleged price-fixing scheme with other pharmaceutical firms.

The news comes at a time when pharmaceutical companies are distrusted by West Virginians, who are confronting a devastating opioid epidemic. The Charleston Gazette-Mail reported last week that drug companies have shipped overwhelming numbers of opioids into small coal mining towns where overdose deaths are high. Republicans see a pattern of corruption benefiting the Manchin family at the expense of West Virginia.

“Republican leaders in West Virginia believe Manchin is vulnerable in 2018, based on the Bresch controversy and Manchin’s initial support of Clinton for president,” says Myer. However, he credits Manchin as a “very sharp politician” who will likely prevail in a head to head race with a Republican challenger. But Manchin’s support for Clinton is likely no small factor in a state that voted overwhelmingly against her, partly because of her opposition to coal.

Despite Trump’s success in West Virginia, Democrats maintain a thirteen percentage point advantage over Republicans in voter registration. But this is far less than the 22 percent advantage they had in 2012. The rapid swing in registration is highly unusual, and it has Republicans feeling like they have momentum.

“Manchin embraced Hillary Clinton, trekked her through the coal fields and embraced many of the policies she promoted. The fact that she received only 26 percent in a state that once was the bluest of blues, tells you that this is a very different West Virginia than when Manchin first ran for statewide office,” a GOP operative tells InsideSources. “There’s no question that he will be the senate GOP’s top target in 2018.”

Around the same time Morrisey, the prospective GOP challenger, was in Washington to plan a run against West Virginia’s senior senator, Manchin was meeting with President-elect Trump to discuss energy policy and regulatory reform, both important issues in West Virginia, which has been battered by environmental regulations during the Obama administration. At the time, some observers speculated that Manchin was in consideration for a seat in Trump’s cabinet.

“Trump is considering Manchin for a Cabinet post, possibly secretary of energy. That would be an excellent choice, good for West Virginia as well as the nation as a whole,” wrote Myer recently.

However, former Texas Gov. Rick Perry was announced not long after the Manchin meeting to head the Department of Energy. Perry has already won the support of Capito, and the Republican Party of West Virginia was fiercely critical of a possible Manchin cabinet pick, stating that Manchin “sold out our energy industries and working families to the Obama-Clinton Team.” Some speculate that Republicans may have had an easier path to victory in 2018 had Manchin received a Cabinet post and a less experienced Democrat, appointed by West Virginia’s Democratic governor, had been appointed to the Senate.

Manchin was also passed over for a position as head of the Environmental Protection Agency (EPA), a pick that instead went to Oklahoma Attorney General Scott Pruitt, who has been one of the agencies leading critics.

In response to that selection, Morrisey launched one of the first volleys in his prospective campaign against Manchin, calling on the senator to support Pruitt. “Scott Pruitt’s confirmation as EPA Administrator is vitally important to our state,” Morrisey wrote. “I urge Senator Manchin to put his full support behind this nomination.”

Manchin responsed to Morrisey last week, outlining his expectations for the agency under the coming administration. Without fully endorsing Pruitt, he nevertheless expressed his belief that “the EPA is in desperate need of reform” and stopped short of directly criticizing the president-elect’s pick.

“No one has fought harder against administration overreach and regulation than I have, and I need to make sure the next EPA Administrator is as serious as I am about reforming this rogue agency,” Manchin wrote in the letter.

As Manchin looks ahead to 2018, he can expect to consistently find himself walking a fine line, balancing the interests of his state and its support for Trump against his position in a Democratic Party constantly at odds with his constituents.