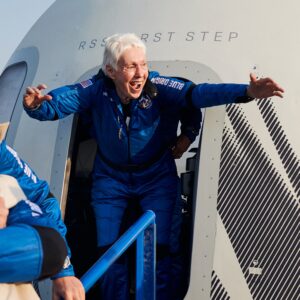 What Aviation Can Teach Healthcare

Aviation can teach healthcare a lot. Both fields depend upon skilled professionals who are responsible for the lives of their customers. Markets, relatively unfettered by laws and regulations, determine the numbers and kinds of pilots. The numbers and kinds of healthcare workers, however, are heavily influenced by political processes. The ways that pilots and healthcare professionals are trained and licensed accounts for much of the disparity.

On July 20, 82-year-old Wally Funk rode into space atop Blue Origin’s New Shepard rocket. If American politicians had had more foresight in 1961, Funk might have been the first woman in space. In training tests, Funk supposedly outperformed all seven men chosen for the Mercury program—including Alan Shepard, for whom her rocket was named.

The government didn’t send her up, most likely because of her gender. But 60 years later, the private sector (specifically, fellow astronaut Jeff Bezos) carried her into space.

In a pre-flight interview, Funk said, “I have 19,600 flying hours. I have taught over 3,000 people to fly—private, commercial, instrument, flight engineer, airline transport, gliding. Everything the [Federal Aviation Administration] has, I’ve got the license for,” adding, “and I can outrun you.”

Funk’s lifelong aviation experience holds lessons for healthcare. She had to acquire every one of her flying skills somewhere and demonstrate her competence in each to qualified judges. Then, off she went. Her training was “stackable.” However narrow her original license was, she was free to stack more certifications (commercial, instrument, etc.) atop her existing portfolio.

Go to medical school, get a degree, pass the medical examinations, and obtain a state medical license; now, you’re legally entitled to do anything that falls under the aegis of “medicine.” (As a practical matter, hospitals and other private institutions may limit the procedures a particular doctor may perform.)

But try taking your skills to another state, and your ability to practice will depend on politics, not competence. Move to Arizona, and you’re welcome to begin practicing after some brief formalities. If you’re licensed in one of the 29 states of the Interstate Medical Licensure Compact, you can practice in any of the other 29 states (plus D.C. and Guam). But otherwise, you’ll likely have to undergo a lengthy, expensive process of obtaining a new license.

Become a nurse practitioner, and by law, you can only perform services that fall within your state’s scope-of-practice laws. Nurse practitioners can and do acquire the expertise necessary to, say, perform vasectomies or colonoscopies. In one state, politicians may say, “Go ahead and do these procedures,” while in another state, politicians say, “Nope. Doctors only.” The arbitrary patchwork of healthcare licensing laws among the states demonstrates how political considerations are often more important than patients’ needs.

These political barriers exacerbate a growing problem. In many areas of the country, medical professionals of one type or another are in short supply—with shortages projected to grow significantly over the next few decades. In a new Mercatus Center research paper on “Depoliticizing Healthcare Licensure,” we argue that these limitations are solvable—if the political will exists.

Once pilots are trained and certified in a particular skill, no politician can arbitrarily prevent them from practicing their trade. Governmental regulations are in place to eliminate incompetent pilots (in an open and public fashion, unlike the situation in healthcare).

We argue that states can apply similar principles to healthcare within America’s constitutional framework. A state can depoliticize healthcare licensure by eliminating the monopoly of a single licensing authority and permitting competing state-accredited professional boards to define scopes of practice. (To a limited extent, some states already do this by having separate boards for allopathic and osteopathic physicians.) A state can follow Arizona’s example and unilaterally recognize out-of-state licenses. During the COVID-19 pandemic, physicians could conduct telemedicine visits in any state; some states are moving to make this arrangement permanent. For other professionals (like nurse practitioners) depoliticizing licensure means removing scope-of-practice limits from the political arena and substituting tests of demonstrable competence.

There are thousands of healthcare workers with the grit, determination, and skills of Wally Funk but who are denied their place in the sun for no good reason. We can move them to the launchpad, too.

Dr. Murray Feldstein, who practiced urology and held a pilot’s license, is a visiting fellow at the Goldwater Institute, on the emeritus staff at the Mayo Clinic Arizona, and a consultant for the Arizona Board of Medicine. He wrote this for InsideSources.com.