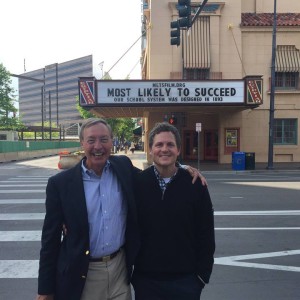 What Should Schools Do to Foster Creativity and Innovation? A New Documentary Offers Ideas.

The film earned a great deal of admiration from policymakers, including Secretary of Education Arne Duncan, but Guggenheim also faced harsh criticism. Some academics and rank-and-file educators said he had scapegoated teachers and declined to sufficiently acknowledge poverty’s role in struggling schools. Critics also argued that the movie perpetuated an inappropriate focus on “high-stakes” standardized testing as a primary metric for student and teacher evaluations.

One of those critics was former venture capitalist Ted Dintersmith, who is now the executive producer of a new education documentary called Most Likely to Succeed. The film screened at Washington’s AFI DOCS film festival last week.

Along with director Greg Whiteley, Dintersmith offers a dramatically different vision for how to improve schools in the 21st Century. In his view, the primary problem with education today is that it fails to give students the human capital skills they need for the new economy. Instead of drilling facts and figures, he argues, schools should focus more on fostering creativity and innovation.

Most Likely to Succeed showcases High Tech High in San Diego, where educators have found success with project-based learning and public exhibitions of student work. The film shows student engineers building massive contraptions with wheels and pulleys while other kids put on a play about women in the Middle East. Dintersmith thinks High Tech’s experience should motivate schools everywhere, which is why he and Whiteley are planning more than a dozen community screenings across the country this year. Like Waiting for Superman, they hope their film will be a call to arms.

“We don’t offer a prescription that this is what every school has got to be,” the director said on an AFI DOCS panel last Friday. “We’re just saying, ‘Here’s one example. Be inspired by it. Now go design your own school.'”

But Whiteley and Dintersmith do in fact offer one clear prescription: less of a focus on traditional testing.

“When you ask people what things were transformational [for them], it’s never the lecture class with the multiple choice questions,” Dintersmith told InsideSources. “It’s never the SAT or the ACT.”

When it comes to evaluating student work, “you have to have the balls to say a large element of this is subjective,” he said. “We’ve got this society that doesn’t have balls anymore.”

Dintersmith also criticized schools for teaching subject matter that may be useless outside the classroom.

“You can’t be somebody in America without having spent two months in high school drilling and figuring out how to factor polynomials,” he said. “No one in the real world ever uses that — no scientist, no mathematician. … Why is that there for two months? It’s there because it’s an easy thing to test.”

Of course, many education scholars have a more complicated view of standardized testing.

Robert Pondiscio of the conservative Fordham Institute calls himself “neither a testing hawk nor somebody who thinks testing is the root of all evil.”

He told InsideSources that “a good education should include grappling with content and opportunities for project-based learning. … Some subjects and pieces of curriculum lend themselves to that and some do not.”

Pondiscio said schools may be overreaching by holding individual teachers accountable for student test scores, but he still believes there’s a role for the evaluations.

“Everybody has a vested interest in knowing where kids stand,” he said.

Watch the trailer for Most Likely to Succeed: