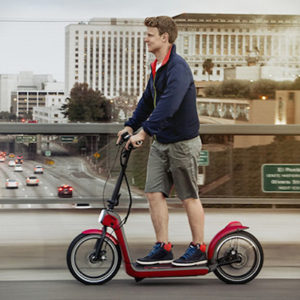 What the ‘Scooter Wars’ Tell Us

Electric scooters have been around for decades, so why have they suddenly gone from novelty to regular sight on the streets of many American cities? The recent e-scooter craze shows how entrepreneurs can take an everyday product and change the way consumers think about it. The resulting battles between officials and innovators might reveal even more.

In the past, a few individuals used electric scooters to commute. Overall, though, these devices weren’t available and accessible enough for all but the most committed riders. Now the entrepreneurs behind companies like Bird and Lime have a new solution to the “last mile” problem — those pesky trips too long to walk but too short to justify the expense of driving and parking.

The answer? Deploying larger numbers of scooters through app-enabled sharing platforms that can replace cars for many short trips. It might not make sense to buy a scooter, but renting one from a convenient street corner is a different story. In fact, Bird believes scooters could reduce car trips by as much as 40 percent this way.

In cities without laws on the books to regulate scooters, entrepreneurs have followed the model of fellow sharing economy transportation companies like Uber and Lyft by launching first and asking for permission second.

The growing field is unique not only because it provides consumers with more options, but because it’s leading to even more entrepreneurial activity. Individuals can make money by signing up to recharge the scooters and place them back in the needed locations for the next day. It’s relatively inexpensive (you don’t need a different charger for each company), requires no specific time commitment, and — unlike many sharing economy roles — does not require specialized knowledge or skills. It’s so easy even kids can do it.

Some critics have argued that the e-scooter is just a fad, but as more consumers and investors embrace them that seems increasingly unlikely. With the better part of $1 billion in investments, more companies are entering the market — and not just with scooters or bicycles, but with even more interesting transportation options like electric mopeds. Consumers are revealing a desire for more choices and an openness to new options beyond the typical bikes, buses and cars.

Even if scooters don’t become a long-term part of our transportation ecosystem, how regulators respond to them will send a lasting message to future innovators.

Here’s the important thing to remember: When cities like Baltimore, Seattle, Boston or Miami (among many others) attempt to pre-emptively regulate a brand-new innovation through fines, confiscation or even bans without proof of any significant harm or danger, they discourage innovators. That means we could miss out on not only scooters but future environmentally friendly, congestion-lessening forms of transportation.

Regulators should also be aware that in this increasingly competitive age, scooter entrepreneurs can quickly engage in “innovation arbitrage” by moving to cities with more friendly regulatory environments. For example, Pittsburgh has been able to attract early autonomous vehicle testing by working with innovators to deploy their product rather than pre-emptively stopping them. Because many millennials value having non-car transportation options, cities that refuse to adapt to new realities may find themselves falling behind in recruiting or retaining this sought-after demographic.

Instead of looking for ways to stop scooters and other micro-mobility options, cities should follow the example of Memphis and work with innovators and find ways to collaboratively improve city transportation. In fact, the most forward-thinking cities might even look at how future urban planning can embrace the expanding transportation landscape, rather than merely focusing on the limitations of these devices in today’s cities.

Just as scooter innovators learned from earlier sharing economy entrepreneurs, the next wave of innovators and entrepreneurs will learn from the scooter-sharing experience. Will regulators give them a green light to go forward, or slam the breaks on environmentally friendly, pro-consumer choices?