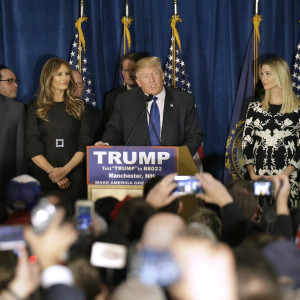 Meet the Trumps: Candidate’s Family Puts Its Brand on Campaign

The sight of Donald Trump’s wife and adult children joining him on stage after winning the New Hampshire primary may have been many Americans’ first real glimpse of the billionaire’s family — but it’s not likely the last.

On social media, on cable and network news programs and on the campaign stump, the Trumps are increasingly visible surrogates for the Republican candidate, promoting his message and pushing his bid for the GOP nomination in person and on social media.

Here’s a look at how the members of the family have put their own distinctive brands on the campaign in recent weeks:

• Oldest son Donald Trump Jr. has, somewhat surprisingly, emerged as the key public advocate for the campaign. While his father is on the stage in South Carolina Saturday night for the ninth GOP debate, Trump Jr. will be in Utah to deliver the keynote address to the Western Hunting and Conservation Expo in the Salt Lake City convention center. The 38-year-old father of five seemed for years slightly uncomfortable with the celebrity that came with his famous last name, but he’s increasingly polished in front of a camera and has taken a leadership role in his father’s company (executive vice president) and in the campaign.

On the trail, he’s willing to defend his father’s most incendiary comments and his lifelong passion for hunting has made for a natural connection with gun-friendly GOP voters. He was in Iowa a month before the caucuses this year to go deer-hunting with Iowa Gov. Terry Branstad, and he told the press that, as a young man, “the fact that I was in a tree stand or a duck blind on many mornings probably kept me out of a lot of other trouble.”

Still, a weekend duck or deer hunt is one thing, and shooting exotic game in Africa is another (just ask the unfortunate Minnesota dentist who shot Cecil the lion last year). Both Donald Jr. and his younger brother have been criticized by wildlife advocates after photos of the Trumps holding a dead leopard surfaced from a 2011 African hunting trip. Animal rights have never been a critical issue in an American presidential race before, but 2016 has been a year for firsts.

• While her older brother has thrown himself into the new family business — politics — 34-year-old Ivanka Trump, who has carved out her own Manhattan-based fashion and jewelry empire, has picked her shots — perhaps wary of watching her own expanding luxury shoe, handbag and other lines suffer the same fate as her father’s menswear products (Macy’s cut ties with the presidential candidate last summer after his comments on Mexican immigrants). Also, it can’t be easy to be Donald Trump’s daughter when one of your best friends is Hillary Clinton’s daughter.

On Twitter, Ivanka’s brothers sound off regularly about politics, but Ivanka’s 1.8 million Twitter followers get, for the most part, a steady stream of innocuous fashion tips, career advice for women and property updates from the Trump Organization, where she, too, is an executive vice president.

Still, the mother of two, expecting her third, has made it clear she’s backing her dad. She was chosen to introduce him when he made his announcement last summer and she hit the trail with her siblings in New Hampshire, shaking hands, talking to supporters and firing up volunteers. She has also repeatedly stepped in to defend him against charges of sexism, saying he’d be “incredible for women in this country.”

• Eric Trump, like his brother and sister, is an executive vice president at the Trump Organization, but unlike most of the Trump clan, he didn’t follow dad to the University of Pennsylvania, choosing to attend Georgetown University instead. The married 32-year-old (his wife, Ivanka’s husband and Donald Jr.’s wife are all regulars on the campaign trail as well) had a moment in the spotlight this week when it fell to him to defend his father’s endorsement of waterboarding — and beyond, if need be — as an appropriate means of interrogation of terrorist suspects.

“You see these terrorists that are flying planes into buildings, you see our cities getting shot up in California, you see Paris getting shot up, and then somebody complains when a terrorist gets waterboarded, which quite frankly is no different than what happens on college campuses in frat houses everyday,” Trump son No. 2 said in an appearance on Fox.

On the business side, Eric has his specialty, too, taking the Trump brand into the growing wine market with his ownership of Virginia’s largest vineyard, named, of course, Trump Wineries.

Since then, the 45-year-old Slovenian-born wife of the 69-year-old billionaire (his third) has become a more familiar sidekick on the trail, joining Trump before crowds in Iowa and New Hampshire.

The former architecture student has cited Betty Ford and Jackie Kennedy as role models for the job of presidential spouse, but it’s clear the uninhibited supermodel would break the mold when it comes to the conventions of first lady — she’s posed nude, bragged about the couple’s sex life and as recently as a year ago was posting bikini shots on her Twitter account. (Interestingly, first wife Ivana, 66, and second wife Marla Maples, 52, have both said nice things about their mutual ex).

• Tiffany Trump, Donald Trump’s 22-year-old daughter by second wife Maples, grew up in Los Angeles and has dabbled in a music career. But, like two of her older siblings, she followed her father to the University of Pennsylvania and is said to be looking to law school after. Despite the distance and gap in age, she and her older sister have said they are close, with Tiffany serving as a bridesmaid at Ivanka’s 2009 wedding and Ivanka scoring an internship at Vogue for little sister.

The four adult Trump children laughingly told Barbara Walters that Ivanka is their father’s favorite, but the New York real estate tycoon has publicly doted on his youngest daughter as well, bragging to People Magazine in 2014 about the college student’s grades: “She’s got all A’s at Penn, so we’re proud of her.”  Like her siblings, she campaigned in New Hampshire, and has talked about her support in interviews.

• Trump’s youngest son, 9-year-old Barron, his only child with wife No. 3 Melania, is shielded from much of the sort of press attention that routinely follows the other Trump children (he has a Twitter account that has yet to post a tweet), but his mother says he is his father’s son.

In an interview with Parenting.com, she described Barron as “independent and opinionated and knows exactly what he wants. Sometimes I call him little Donald.”

She said her husband is a a good father, but wasn’t exactly the most hands-on when Barron was a baby. “He didn’t change diapers and I am completely fine with that. It is not important to me. It’s all about what works for you,” she said.