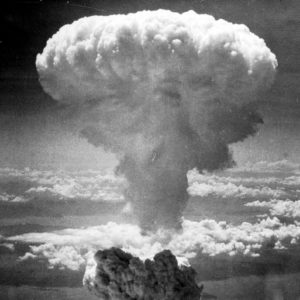 What’s First, Their Nuke or Ours?

The prospect of nuclear war is frightening beyond imagination. We talk in the abstract about the millions who would die but are reluctant to accept the reality that the worst might someday come true.

Such talk echoes through the media whenever the question arises of who might strike first. The debate assumes urgency as the U.S. considers whether to adopt a policy of “no first use,” meaning the U.S. would not initiate the nuclear holocaust.

The issue strikes a special chord among Americans considering the U.S. place in global history as the first country to use nuclear weapons. The atom-bombing of Hiroshima and Nagasaki in August 1945 led Japan’s Emperor Hirohito to call on his people “to pave the way for a grand peace for all the generations to come by enduring the unendurable and suffering what is insufferable.”

With those immortal words, the Japanese surrendered unconditionally, giving up all the territory they had conquered from the Dutch East Indies, now Indonesia, to French Indochina, meaning Vietnam, Cambodia, and Laos, to portions of China, including Manchuria, to the Korean peninsula. In the ecstasy of triumph and relief over Japan’s defeat, it was easy to sublimate images of charred, burned bodies and urban wasteland or the long ordeal of those who would suffer and die months or years later from nuclear radiation.

Rather than focus on global denuclearization, policy-makers wonder whether the U.S. should wait for some other country, maybe Russia, which has well over 6,000 nukes, 700 more than the U.S., or China, which has about 300, or North Korea, which has a few dozen, to conduct the first nuclear strike before firing back in kind.  Some are asking, why give Russia or China the advantage of a first strike when the Americans should force the surrender of one or both of them by striking first, as at Hiroshima and Nagasaki.

This debate is insane. Regardless of who struck first or second or third or fourth, the devastation would be so enormous as to jeopardize the survival of billions. “Should we continue to fight,” Hirohito warned, “not only would it result in an ultimate collapse and obliteration of the Japanese nation, but also it would lead to the total extinction of human civilization.”

Those words ring true today. Nuclear weaponry by now packs far more power than in 1945. North Korea’s sixth, most recent nuclear test, in September 2017, was several times more devastating than the Hiroshima bomb. The U.S., Russia, and China all have warheads capable of wiping out major cities far larger than Hiroshima or Nagasaki.

Nor is North Korea’s Kim Jong-un the only leader to claim the need for nukes for self-defense. That’s the rationale of all the eight other members of the nuclear club, which also includes Britain, France, Pakistan, India, and Israel. Still more are weighing demands to go nuclear. In Asia alone, South Korea, Japan, and Taiwan are capable of making nuclear weapons if they sense the need, always, of course, for “defense,” and Iran is also on the way to its first warhead.

Already all these countries are building up their armed forces. South Korea’s President Moon Jae-in wants to strengthen South Korea’s military might, including 550,000 troops, to be able to stand alone against the 1.3 million North Koreans under arms. Japan’s military machine, limited to one percent of the country’s gross national product and less than a quarter-million troops, is one of the strongest in the region in terms of weaponry. Taiwan would need a lot of help from friends, notably the U.S., but has nearly 300,000 troops primed to resist vastly superior forces from the Chinese mainland.

Nuclear powers today are modernizing their nukes. America’s aging nuclear stockpile is said to need updating with more and “better” warheads. As tensions rise across the Pacific, China’s President Xi Jinping is anxious to increase China’s nuclear strength, so far behind that of both Russia and the U.S.

In the game of nuclear dare and double-dare, neither the U.S. nor China would gain an advantage by dropping the first nuclear bomb in warfare since 1945. The other would retaliate while the world responded in horror and terror.

Rather than demand North Korea alone get rid of its nukes, how about suggesting the leaders of the world’s most exclusive club, the nuclear club, negotiate denuclearization just as they talk about climate change? That idea doesn’t seem to have arisen amid worries about North Korea’s nuclear strength and fears the U.S. may soon decide, we’ll nuke you after you nuke us.