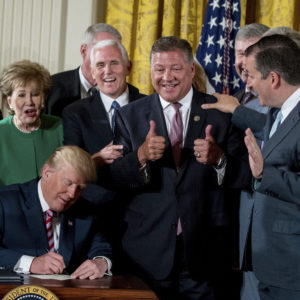 What’s In the Pipes for Water and Wastewater Under Shuster’s Infrastructure Plan?

For some time, waiting for an infrastructure plan was like waiting for Godot, despite all the time that passed, a plan never appeared. President Donald Trump released a draft plan in April, but Congress has dragged its feet introducing a formal bill until Monday, when Transportation and Infrastructure Committee Chairman Bill Shuster (R-Pa.) introduced a draft bill intended to spark discussion among legislatures. Although his proposal to raise the gas tax has gained attention, what is also significant is how the plan addresses water and wastewater infrastructure needs, particularly in rural areas.

“The 2016 presidential campaign shined a spotlight on America’s crumbling infrastructure. Since Election Day, the American people have waited for action by their federal elected representatives, and I am just as frustrated as they are that we have yet to seriously consider a responsible, thoughtful proposal,” said Shuster, when announcing the plan.

Shuster’s plan increases funding for water resources by expanding the Water Infrastructure Finance and Innovation Act (WIFIA). This program aims to boost investment in water infrastructure by providing long-term, low-cost supplemental loans for projects of regional and national significance. Under the terms of the proposed bill, state, local, and tribal governments would be able to finance a greater percentage of the costs of eligible projects through this program. The current law allows for 49 percent of approved projects to be financed with WIFIA loans, but the new bill would increase this to 80 percent.

Because of its loan assistance structure, the WIFIA program has been of interest to infrastructure policy analysts for some time.

“Although the WIFIA program is only one small part of the EPA’s budget – totaling about $25 million – it can leverage additional financial resources over time that go beyond the initial federal subsidy,” wrote Brookings Institute Associate Fellow Joseph Kane last year. “In other words, unlike federal grants, WIFIA loans depend more on the ability of borrowers to generate revenue, reduce investment risk, and consider other forms of private and nonfederal financing; as a result, it is estimated that the initial federal subsidy can drive more than $2 billion in water loans.”

Historically, demand for the program has outstripped its funding. Shuster’s plan would dedicate an annual $50 million to the program for fiscal years 2020-2024. There is a catch, though. The original program covered improvements to flood prevention systems, harbor navigation systems, and other improvements to navigable waterways, in addition to waste and drinking water treatment. The additional funding Shuster’s bill provides would have to be spread among these various needs as well.

It also provides an additional five years of funding for federal water pollution control programs and specifies new training for “rural, small, and decentralized” water treatment facilities, “to enable such treatment works and systems to protect water quality and achieve and maintain compliance.”

In addition to monetary assistance, the plan includes proposals to assist states in simplifying procedures for treatment facilities to obtain technical assistance. It also continues the Trump administration’s push to streamline permitting by mandating that state applications be given an answer within 180 days of their submission. To keep to this tight timeline, the bill removes the need for duplicate environmental and engineering reviews where state agencies have already performed them.

“Capital support for infrastructure will lead to more U.S. jobs and a stronger economy. While some projects will need public financing, others can be completed using private investment,” said Craig Stevens, president of the GAIN Coalition, a pro-industry group.

“The federal government can encourage this private investment by streamlining the regulatory process and by providing companies with certainty that the government means what it says when it comes to permitting.  We look forward to digging into this bill and hope to work with the Chairman and others to see that a commonsense infrastructure bill becomes law,” he said.

Shuster’s plan is now the third to be introduced in Washington. Despite Trump’s push for infrastructure investment during his presidential campaign, thus far infrastructure has been more of a recurring calendar theme than a policy change. Now, the approaching midterm elections are likely to further delay consideration of Shuster’s proposal. Republican leadership of key committees including Transportation-HUD Appropriations in the House and Environment and Public Works in the Senate have had mixed opinions about whether the bill could be pushed through by a lame duck Congress.

No one is holding their breath on success, but now an infrastructure plan is in the works, again.