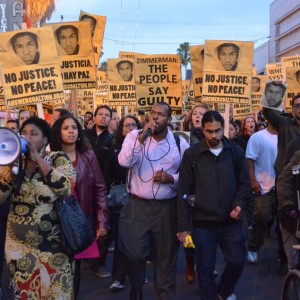 When it comes to 30-second soundbites, Eugene Puryear is getting pretty good.

The 29-year-old D.C. activist has been giving quick quotes to the press for years, first demonstrating against the Iraq War and organizing on criminal justice issues, then running unsuccessfully as a socialist candidate for office. The Howard University alumnus authored the book Shackled and Chained: Mass Incarceration in Capitalist America, and he’s emerged as a prominent member of the Black Lives Matter movement in the nation’s capital.

After joining the headline-grabbing disruption of District Mayor Muriel Bowser’s speech on crime last week, Puryear was on hand to talk with at least half a dozen media organizations. He castigated the mayor for plans to toughen penalties and put more police on the streets, saying she should be focused on providing jobs, housing and services to troubled communities.

InsideSources was curious to hear from Puryear at length about Black Lives Matter. In an hour-long interview Tuesday, he explained his take on the movement and its mission, strategy and tactics, and how to turn protests into public policy.

Black Lives Matter began two years ago following the shooting death of Trayvon Martin, and the movement has been fueled by outrage over subsequent killings of unarmed black Americans, primarily at the hands of law enforcement. Puryear argued that these individual incidents should be seen as evidence of a collective problem: overly militarized policing:

For thirty years, we’ve been saying “more cops, more prisons, tougher laws.” Not only hasn’t it really worked in terms of crime, but beyond that the fallout has been so significant.

Puryear credited the Black Lives Matter movement with injecting these issues into the national conversation, much as Occupy Wall Street generated discussion about income inequality and spawned successful “Fight for 15” activism for a higher minimum wage. However, Puryear also acknowledged that media coverage has tended to focus more on his movement’s disruptive demonstrations rather than its ideas for change:

As the movement matures, a lot of us are starting to look at that conundrum. If we feel like [the media] didn’t say what we were talking about, maybe we need to also think about how we can be more intentional about messaging our actual demands.

Asked about the controversial tactics of some activists across the country, including violence and destruction of property, Puryear said “all movements use a variety of tactics”:

If we’re not constantly evaluating whether what we’re doing is actually making a difference, then we will fail. Obviously a lot of the tactics have been disruptive. People have blocked highways. In some cities they’ve blocked subways. … I think the highway blocking is fair game. In terms of some of the other stuff, I think most of the time it’s ill-conceived, even if well-meaning. … If you’re walking down the street, and you were to break a car window, you don’t even know who’s car it is, it could be someone who supports you.

I believe tactics have to be based on a strategy of creative tension. … If what you’ve done is made everything about ‘Oh, they just broke a bunch of windows,’ not ‘Oh, man, this is serious,’ you’re in trouble. That being said, if you look at what happened in Baltimore, there was a lot of righteous anger in that uprising that did advance the conversation. It wasn’t until Baltimore that people started seriously talking about the social conditions in a lot of these communities.

Pressed on whether he would actively advise against breaking windows or looting, Puryear clarified:

If someone asked me about the most effective way to take political action, I would not counsel them to do that first. … What I will say is that when things like that happen, I’m not going to go back in retrospect and tell those people that they were wrong. The way people cry out is always going to be diverse.

Puryear also argued that negative reactions to activism can sometimes end up having positive value if they force tough conversations among the general public. “Obviously that’s not always the case, but there’s just never been significant social change that’s happened off of polite conversation,” he said.

Moving forward, Puryear will be advocating against Mayor Bowser’s proposed crime policies as they head to the D.C. Council. He said he believes many District legislators may be more receptive to activists’ critiques and have “a desire to see something coming from the Black Lives Matter movement become institutionalized.”

Some of the policies Puryear and his allies have proposed as an alternative to Bowser’s approach include city beautification projects to employ residents and “community-led peacekeeping.”