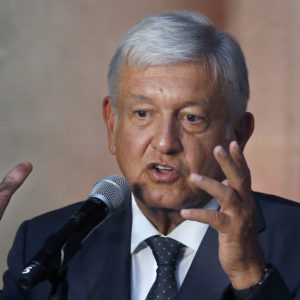 Mexico's President-elect Andres Manuel Lopez Obrador speaks to reporters after meeting with Mexico's President Enrique Pena Nieto at the National Palace in Mexico City, Tuesday, July 3, 2018. The president-elect met with the current leader to discuss his transition to office in December, aiming to ensure an orderly transfer of power after a heated and polarizing campaign. (AP Photo/Marco Ugarte)
[IS] Opinions

What’s Next for U.S.-Mexico Relations?

After decades of rightful dissatisfaction with the governing parties of Mexico, Mexicans elected Andres Manuel Lopez Obrador as their next president on the July 1 elections. Garnering 53 percent of the reported vote, the anti-establishment president-elect had a landslide victory that has resulted in a majority of the nine governorships up for election and absolute majority in the Senate and Chamber of Deputies for Lopez Obrador’s coalition.

The Partido Revolucionario Institucional (PRI), which once dominated Mexican politics for more than 70 years, experienced a heavy loss at the ballot boxes due to Mexicans’ profound discontent toward the lack of economic growth and opportunities, the persistence of massive poverty and inequality, violence, insecurity, impunity and corruption that has plagued the country, much under the PRI’s watch throughout the outgoing Enrique Pena Nieto administration.

Yet, it was remarkable to witness the strength of Mexico’s young democracy when the losing candidates expressed quick and graceful concessions soon after polls closed. President Trump also congratulated Lopez Obrador at the end of the night, and Lopez Obrador expressed his desire to reach an understanding of mutual respect between the United States and Mexico. Taken together, this marked a positive start to Mexico’s unusually long five-month transition period, which will end Dec. 1, when Lopez Obrador comes into office for the next six years.

However, there are those who are concerned with the fact that Trump and Lopez Obrador are now leaders of two nations whose bilateral relationship not only touches the daily lives of Americans and Mexicans in a way that not many other relationships do, but that is also at risk of unraveling entirely. After all, over the last 30 years the United States and Mexico have established significant political, economic, security and cultural ties that cannot be easily overlooked, not even with the current state of U.S.-Mexico relations: hostility, mainly of President Trump’s doing.

For all the speculation about Lopez Obrador becoming an antagonist of Trump, it is unlikely that he would risk further deterioration of the bilateral relationship. When reflecting on Lopez Obrador’s tenure as mayor of Mexico City, he was less radical and more pragmatic than he recently appeared to be — there are many in Mexico and the United States that believe his recent posture and political rhetoric were for campaign purposes only and that he will ultimately be a rational leader.

Lopez Obrador, and those close around him, should understand by now that an economically strong and physically secure Mexico, from a national security perspective, is in the best interest for both Mexico and the United States. The best opportunity for Mexico to achieve stability is through close cooperation with its most important neighbor — not through isolationist policies.

However, if Trump continues his tirades on Mexico, Lopez Obrador would be expected to demonstrate to his voters that their vote went toward someone who can take bold leadership and defend Mexico against Trump’s hostile rhetoric and actions, which can potentially damage government-to-government relations with the United States.

The next five months, particularly leading up to the U.S. midterm elections in November, may be a decisive test of how both administrations will behave toward each other for the next few years. It is imperative that elected officials at all levels of government on both sides of the border amplify their support for maintaining and preserving U.S.-Mexico relations. For example, the clearest place our two countries can find mutual benefit in a functioning relationship is in the security space. Equally important, a broad range of civil society actors in both countries should engage their counterparts to share experiences and to leverage the connectivity that exists between the United States and Mexico.

Ultimately, reason will prevail. There are too many stakeholders in the bilateral relationship — from government officials to private sector and civil society, as well as kinship — to let the future of U.S.-Mexico relations rest on personal attacks between Trump and Lopez Obrador.

Joel Martinez is the Mexico research associate at the Center for American Progress.