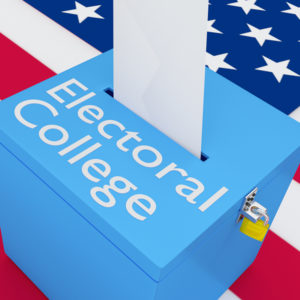 What’s the True Agenda Behind the Movement to Abolish the Electoral College?

One of Georgia’s 16 presidential electors cast her Electoral College vote for Joe Biden but says, if she had it her way, the United States would do away with the constitutional election process altogether—a radical and dangerous position.

It may not seem right to Ms. Woolard, but the Electoral College purposefully forces would-be presidents to build nationwide coalitions, courting diverse voters across the country. It should remain in place. Otherwise, politicians would ignore the needs of people in ‘flyover country’ and focus even more on big cities and the coasts.

Failed presidential candidate Hillary Clinton was another elector who, like Ms. Woolard, called for eliminating the Electoral College even as she cast one of New York’s electoral votes for Democrat President-elect Joe Biden.

“I believe we should abolish the Electoral College and select our president by the winner of the popular vote, same as every other office,” she said in a tweet. “But while it still exists, I was proud to cast my vote in New York for Joe Biden and Kamala Harris.”

Clinton is missing the fact that the presidency is not like other offices. Most major democratic nations use a two-step process (usually a parliamentary system) to elect their top executive. Our Electoral College, like those other systems, balances the interests of everyone across a diverse country while limiting the power of big-city elites.

Our system also limits the power of Washington, D.C. As Thomas S. Kidd, history professor at Baylor University, says, “2020 has shown that the states still possess powerful checks on national executive power. That’s a good thing, and we should be exceedingly cautious about cutting the states out of the process of electing the president (i.e. the Electoral College).”

Really it was Clinton’s own decisions that cost her the presidency, and the Electoral College worked just right. By design, the Electoral College rewards candidates who do the hard work of winning over Americans in many states, not just winning huge margins in a few states or giant cities. The American Founders believed the president should be a national candidate, not a regional one.

In 1888, Grover Cleveland won the popular vote but was blown out in the Electoral College because his support was concentrated in the South; he won huge margins there but lost almost everywhere else. Similarly, Clinton ran up huge margins in coastal states while failing to connect with middle America.

Clinton dismissed struggling voters as “deplorables” and lost their votes as a consequence. Marc Thiessen of The Washington Post argues, “Clinton still can’t seem to tell the difference between a white nationalist and working-class voters who are upset because their family incomes are stagnant or falling, they feel shut out of the labor force, and their communities are mired in substance abuse and despair. These ‘forgotten Americans’ had legitimate grievances that Democrats ignored.”

The Clinton campaign also squandered its monetary advantage by failing to invest enough in states like Michigan and Pennsylvania. According to one liberal activist, the candidate’s team was, “very surgical and corporate. Their thing was, ‘We don’t have to leave [literature] at the doors, everyone knows who Hillary Clinton is.’”

Joe Biden corrected Clinton’s errors, cultivating a working man persona and investing heavily in turning out the vote in key states. He received the Democratic nomination in part because primary voters believed he would appeal to those “forgotten Americans” who Clinton had ignored and demeaned.

In both 2016 and 2020, the Electoral College worked as intended. Serious presidential candidates were forced to build diverse coalitions rather than relying on one region or demographic group. For close to 250 years, the Electoral College has fostered a healthy and vibrant electoral system, and we shouldn’t throw that away because Hillary Clinton mismanaged her campaign.

Trent England is the founder and executive director of Save Our States and author of Why We Must Defend the Electoral College. He wrote this for InsideSources.com.