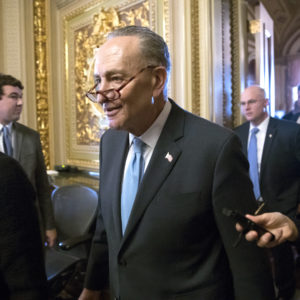 Senate Minority Leader Chuck Schumer, D-N.Y., heads to the chamber with fellow Democrats for a procedural vote aimed at reopening the government, at the Capitol in Washington, Monday, Jan. 22, 2018. (AP Photo/J. Scott Applewhite)
[IS] Opinions

What’s so Unsettling to Sen. Schumer About “Settled Law?”

What’s so unsettling to Senator Chuck Schumer about “settled law?”

Sen. Susan Collins (R-ME) made headlines when she left her meeting with Supreme Court nominee Judge Brett Kavanaugh and announced: “We talked about whether he considered Roe to be settled law. He said that he agreed with what Justice Roberts said at his nomination hearing in which he said it was settled law.”

This is good news for the White House, because it indicates Sen. Collins is unlikely to break ranks and vote against Kavanaugh. Which means it’s bad news for Sen. Schumer and his party’s uphill fight to keep Kavanaugh off the court.

And so, Sen. Schumer says, “settled law” doesn’t “settle” anything.

“Let’s be clear — this is not as simple as Judge Kavanaugh saying that Roe is settled law,” Schumer said after the story broke. “Everything the Supreme Court decides is settled law until it unsettles it. It’s no different than the typical judicial dodge of saying you respect stare decisis.”

So a nominee saying “settled law” simply isn’t good enough for Sen. Schumer. Except for when it is.

In 2005, during the confirmation hearings for Chief Justice John Roberts, Sen. Schumer said he was “impressed” with Roberts’ “concepts of modesty and stability. They suggest to me you respect precedent and well-settled law.”

And again in 2006 when, during his grilling of Justice Samuel Alito, Sen. Schumer asserted that the “settled law” standard had been set:

“So why is it only when it comes to Roe you can’t tell us whether it is settled, whether it is not settled, or how it is settled, and you can pick any formulation you want,” Schumer demanded of the nominee. “Other judges have commented on Roe being settled.  Ruth Bader Ginsburg talked about her view and she still got a lot of votes on the other side of the aisle.”

Settled or unsettled, Sen. Schumer voted against both Alito and Roberts anyway.  This adds to the speculation that his complaints of a Kavanaugh “dodge” are in fact merely anti-Trump partisanship.

“The real dodge is Senator Schumer dodging the fact that Supreme Court nominees, Republican and Democrat alike, do not answer questions that would prejudge issues that come before the Court,” says Adam J. White, a professor at George Mason University’s Antonin Scalia Law School.

“Surely the Senator remembers Sonia Sotomayor—whom Schumer personally introduced at the beginning of her 2009 hearings—explaining why nominees should not prejudge issues,” White said.

During her confirmation hearings, Sotomayor told the Senate Judiciary Committee: “I will follow precedent according to the doctrine of stare decisis. I can’t prejudge what that precedent means until the issue comes before—what a prior decision of the Court means and its applicability to a particular issue is until that question is before me as a judge—or a Justice, if that should happen.”

As the Washington Post reported at the time, “in not allowing senators to pin her down on concrete matters of law, Sotomayor borrowed an approach that has been used by most nominees to the nation’s highest court since the failed nomination of Robert H. Bork.”

Known as the “Ginsburg Standard” after Justice Ruth Bader Ginsberg, nominees simply refused to answer detailed questions about specific cases or issues that might come before the court. Ginsberg was confirmed by a vote of 96-3.

And it worked for Sotomayor, too. Senate Democrats, including Sen. Schumer, backed her unanimously in a 68-31 confirmation vote.

So what is Sen. Schumer’s objection now? Judge Kavanaugh is certainly meeting the standards met for earlier, successful nominees. As Josh Blackman, professor at South Texas College of Law said:  “Judges cannot provide a preview of how they would vote on a given case. There isn’t much more that Judge Kavanaugh could have said here.”

Then there’s what might be called the “Schumer Standard.”  During the debate over Judge Sotomayor’s confirmation, her critics highlighted controversial quotes and comments from her public record, including her assertion in 2001 that “I would hope that a wise Latina woman with the richness of her experiences would more often than not reach a better conclusion than a white male who hasn’t lived that life.”

Schumer defended his fellow New Yorker by saying that, while “snippets of statements” were used to criticize the nominee, “we’ve heard precious little about the body and totality of your 17-year record on the bench, which everybody knows is the best way to evaluate a nominee.”

Judge Brett Kavanaugh has a 12-year record on the DC Circuit Court of Appeals, and has written some 300 opinions on cases covering virtually every aspect of jurisprudence. In addition, the Senate Judiciary Committee has received more than 430,000 pages of records to review—more than twice the number for any previous nominee.

Using the Schumer Standard, Senators should have more than enough information to evaluate Judge Kavanaugh’s fitness for the bench, regardless of the senator’s claims on questions “dodged.”