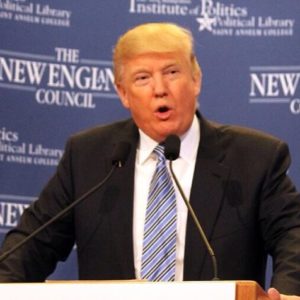 New Hampshire isn’t the likeliest place for President Trump’s first post-convention stop. The state is small, it’s in the heart of deep-blue New England and it’s only gone GOP in one presidential election — GWBush in 2000 — in the past 30 years.

But it’s also the first place Donald Trump ever won an election (he narrowly lost the Iowa caucuses to Texas Sen. Ted Cruz in 2016.) His first campaign manager, Corey Lewandowski, is a fixture in New Hampshire’s GOP politics. And Trump’s supporters love to remind anyone who’ll listen that Trump lost the state by less than 3,000 votes to Hillary Clinton.

And then there’s the fact that Trump was forced to cancel a rally in Portsmouth, NH in July. The campaign says it was the weather, Trump’s critics say it was a COVID. Either way, Trump doesn’t like to look like he backed down.

So, he’s going to make his trip to the Granite State and give a speech, not a rally, at an airport facility in Manchester. And the question is: what’s waiting for Donald Trump in New Hampshire now?

Team Trump dismisses any references to polls, but whether taken by national pollsters like Morning Consult or local ones like the University of New Hampshire or St. Anselm College, Biden’s around 50 percent and Trump is closer to 40 percent. These are recent polls, too.

At the same time, Republican consultants working local New Hampshire campaigns tell NHJournal that Trump’s numbers in their polls aren’t as bad as they feared. “I don’t expect him to win [here], but I wouldn’t be shocked,” one NHGOP consultant told NHJournal.

Andy Smith, Director of the UNH Survey Center, agrees that “New Hampshire is a state that Trump could win, but it would take a number of dominos to fall in place that are largely outside of the campaign’s ability to control.

New Hampshire’s economy is recovering. The Granite State enjoyed one of the lowest unemployment rates in the nation before the COVID crisis, then one of the highest — around 17 percent– during the lockdown. That rate has fallen to 8.1 percent already, about half that of neighboring Massachusetts and the lowest in New England.

Part of the economic progress is due to something else awaiting President Trump: A state relatively free of COVID-19.

New Hampshire’s positive test rate has been below 1 percent for weeks, according to the state Department of Health and Human Services. There are fewer than 10 Granite Staters hospitalized due to COVID, and just 221 active cases in a state of 1.3 million people.

These numbers are even more impressive given that the state has allowed restaurants to reopen at full capacity (if they can follow social distancing and mask guidelines), malls have been open for months, beaches have been busy and some daycare centers never shut down.

Yes, there will be a mask mandate waiting for President Trump, but only because his event will draw a crowd of more than 100 people. Otherwise, there is no statewide mask rule. And virtually no COVID-19.

Also waiting for Donald Trump: Democrats. Lots of them. Democrats took control of the state House of Representatives and Senate in the 2018 blue wave. All four members of New Hampshire’s congressional delegation are Democrats, too — a situation polls suggest is unlikely to change.

Still, rank and file Republicans here give Trump high marks. His approval rating hovers around 80 to 90 percent among GOP voters. That may help explain why Republican Gov. Chris Sununu has attended Trump events in the past and will be at the airport to greet the president Friday, despite Trump’s low poll numbers.

Sununu will not, however, attend Trump’s speech. Likely for the same reasons.

So, what are Trump’s odds of carrying the state?

“It remains to be seen if the strategy of frightening suburban women is working for Team Trump,” says Wayne Lesperance, professor of political science at New England College. “It will be interesting to see if women turn out for him here in New Hampshire. I expect there will be strong shows of support from his base. But, he needs more than that to win, and suburban women breaking his way would represent a boost.

“Otherwise, New Hampshire remains a purple state and the voters remain pretty well divided. It’s a mixed bag for him.”

Longtime NHGOP activist Patrick Hynes, however, sees a possible path for the president. The key, he says, is seniors.

“New Hampshire is an aging state. The 60-and-older population is growing more rapidly than any other segment of the state’s population,” Hynes wrote for NHJournal. “Traditionally, seniors have been among Trump’s strongest supports. Today there is evidence that the president’s response to the coronavirus is hurting him among this key demographic. Trump needs to hold the support of New Hampshire’s seniors to win here.”

So, what awaits Trump in New Hampshire?

“An opportunity to lay out his agenda and that he is fighting for us, not the DC elites,” says GOP consultant Dave Carney.

Is that enough to win the Granite State? Perhaps not, but it appears Team Trump isn’t going to give up without a fight.