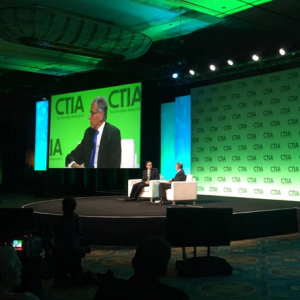 While chatting with Los Angeles Times’ Jon Healy about the incentive auction at CTIA’s Super Mobility 2015 conference in Vegas, Wheeler said he was “supremely confident” the auction would be a success, and named one of America’s biggest broadcasters as a confirmed participant.

“I told him I was going to be talking with you today,” Wheeler told Healy about a meeting he had Tuesday with News Corp/21st Century Fox CEO James Murdoch. “And I said, ‘Can I tell them you are going to show up?’ and he said, ‘Yep.’ Now of course it depends on some of the details we have to work out between now and then.”

Wheeler added he’s already spoken with many of the CEOs of major broadcasters, and he expects the majority to participate as well.

“The broadcast auction offers an incredible opportunity for broadcasters to get a pot of money to innovate in, without losing the business model that they have been so successful with,” Wheeler said. “The indication that I’m seeing is, we’re going to have broadcasters showing up for this.”

“This is a big deal. This has never been done before in the world.”

The auction will give broadcasters an opportunity to sell underused spectrum to wireless carriers — badly needed to support video streaming, photo uploading and other mobile bandwidth-heavy services — and allow them to move broadcasts onto new stations or consolidate and share stations with other broadcasters.

Wheeler, who likened the auction’s many moving parts to a Swiss watch and a Rubik’s cube, went on record saying the years-delayed auction is on schedule to open bidding on March 29, with a schedule of events leading up to the auction due out from the FCC this fall.

Details about auction practice sessions and schedules will be out around Columbus Day in October, and by Thanksgiving, broadcasters will be able to formally apply to participate. Wireless carriers will begin applying for their part in January 2016.

Wheeler said the FCC took its most significant step toward the auction during its open meeting in August, when commissioners voted on rules governing various components of the auction.

RELATED: The FCC Just Laid Out the Plan for America’s Wireless Future

The need for such low-band spectrum in the 600 MHz range has never been greater, according to Wheeler, who said many carriers on on the verge of running out spectrum reserves they already have, ahead of 5G network deployment.

“I had a conversation with the CEO of one of the major companies a couple of weeks ago, and he said … that by 2020 … even if they have 90 percent of their traffic offloaded onto WiFi and other networks, he’s still going to be out of spectrum,” Wheeler said. “And this is a company that has a lot of spectrum.”