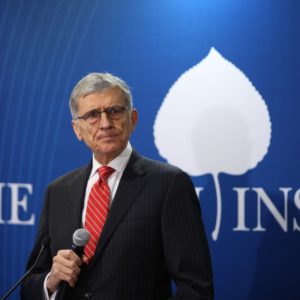 Tom Wheeler gave his last speech as chairman of the Federal Communications Commission Friday, and made one last plea to Republicans not to reverse course on privacy and net neutrality rules that define his legacy.

“All the press reports seem to indicate that the new commission will choose an ideologically-based course,” Wheeler told the Aspen Institute Friday, referencing FCC Republicans’ intention to revisit net neutrality early this year. Wheeler himself has been accused of pushing an ideologically-driven agenda throughout his tenure.

Wheeler said internet provider revenue and stock prices have gone up along with venture capital investment in internet businesses, up 35 percent since the Open Internet Ordered was adopted in early 2015, which reclassified internet providers as public utilities subject to stiffer regulation.

“Yesterday, the CEO of AT&T reportedly told the president-elect that his company had been the country’s leading investor of capital for each of the last five years,” Wheeler said. “This, of course, includes the two years since adoption of the Open Internet rules. A recent report pegged overall network investment at $76 billion for 2015, which is an increase from the year I arrived at the commission.”

Wheeler quoted an AT&T executive who said last summer the carrier is “going to deploy about 250 percent of the capacity that we did in 2013/14, and we’re going to do it for 75 percent of the cost.”

“Those who build and operate networks have both the incentive and the ability to use the power of the network to benefit themselves even if doing so harms their own customers and the greater public interest,” he continued. “This is not casting aspersions at network operators, it is simply stating an historical fact that reflects basic human nature. It is no different than the human impulse that prompted the imposition of speed limits.”

“When are the ISPs going to recognize obeying speed limits helps everyone?” he added.

The rules were upheld by the D.C. Circuit Court of Appeals last year, a “high hurdle” for opponents to overcome, according to Wheeler. He pointed out congressional Republicans’ pitch to pass net neutrality protections without common carrier reclassification fails to meet the court’s requirement for upholding the rules.

Wheeler said the rules amount to rights for consumers that Republicans are threatening to take away.

“The open Internet is the law of the land,” the chairman said. “Tampering with the rules means taking away protections consumers and the online world enjoy today … A hands-off approach to network oversight is more than a shift in direction, it is a decision to remove rights and move backward.”

Removing the rules will not just impact the wired and wireless networks of today, Wheeler argued, but also the future of networks in the cloud and Internet of Things.

“If ISPs get to choose which applications and clouds work better than others in terms of access speed and latency, then they will control the future,” Wheeler said. “If ISPs can decide arbitrarily which IoT devices can be connected, or favor their IoT activity over that of competitors, the bright future dims.”

The chairman pointed out the rules even protect ISPs from each other when they act as edge providers of video on other networks.

“When AT&T – in its role as an edge video provider – is assured access to the broadband networks of Comcast and Charter for its competitive cable-like DirecTV NOW service, it is proof that the Open Internet rule is working,” he explained.

In his last net neutrality effort as chairman, Wheeler said a report this week by the Wireless Bureau citing AT&T for violating net neutrality by making its own video traffic free to subscribers while charging them for competitors highlights the danger to future services.

“Whether it’s Amazon Web Services, or Microsoft’s Azure, or Salesforce.com’s integrated cloud-based activities, ISPs free from open access obligations and behavioral oversight can choke growth and innovation, or, at the least, demand tribute for passing over their network,” he said.

Repealing net neutrality would also do away with the FCC’s recently passed privacy rules for internet providers. Without the rules to hold ISPs to a higher privacy standard, Wheeler said U.S. companies are unlikely to meet European privacy requirements for transferring data from the EU to the U.S. per the new Privacy Shield agreement negotiated by the Commerce Department.

“No company using the internet is safe absent the kind of common carrier requirements America has historically expected of its networks,” he added.

In a parting shot to the incoming administration of President-elect Donald Trump, Wheeler said he’s “taken refuge in Abraham Lincoln’s words in his First Inaugural. ‘While the people retain their virtue, and vigilance, no administration … can very seriously injure the government, in the short space of four years.'”