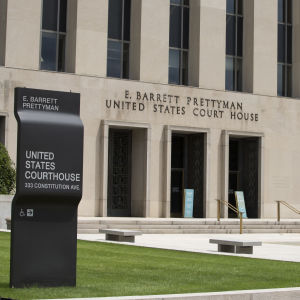 A view of the E. Barrett Prettyman Federal Courthouse that houses the U.S. Court of Appeals for the D.C. Circuit. (AP Photo/ Evan Vucci)
News

These Judges Will Decide the Fate of the Internet in December

The D.C. Circuit Court of Appeals this week named the three judge panel that will decide the legality of the Federal Communications Commission’s net neutrality rules in December.

Circuit Judge Sri Srinivasan, a 2013 Obama appointee, Senior Circuit Judge Stephen Williams, a 1986 Reagan appointee and Circuit Judge David Tatel, a 1994 Clinton appointee, will hear oral arguments from the broadband industry, the FCC and their respective allies for and against the agency’s net neutrality rules in December.

In February the FCC voted to regulate Internet service providers as public utility common carrier services, similar to telephone service providers, under Title II of the 1996 Telecommunications Act as part of its second Open Internet Order. The rules bar ISPs from throttling, blocking or prioritizing web traffic, and give the FCC the power to regulate the rates ISPs charge edge providers and consumers for service.

Tatel is perhaps the most significant choice of the three. The judge authored the January 2014 decision that struck down the FCC’s first Open Internet Order aimed at preventing ISPs from blocking or prioritizing web traffic.

“Given that the commission has chosen to classify broadband providers in a manner that exempts them from treatment as common carriers, the Communications Act expressly prohibits the commission from nonetheless regulating them as such,” Tatel wrote for the D.C. Court of Appeals last year.

Tatel ruled since the FCC exempted broadband service from Title II regulation under the Telecommunications Act in 1996, and instead chose to classify it as an information service (subjecting it to far fewer regulations), the agency couldn’t enforce net neutrality without first classifying broadband providers as common carriers.

The Clinton appointee’s initial ruling upheld net neutrality as a matter of principle, but asserted the rules were applied in the incorrect context.

“Because the commission has failed to establish that the anti-discrimination and anti-blocking rules do not impose per se common carrier obligations, we vacate those portions of the Open Internet Order,” Tatel said.

Tatel shot down the FCC for the first time in 2010 after the agency tried to reprimand Comcast for throttling data speeds to some customers downloading large files on peer-to-peer networks. The judge told the FCC it lacked “any statutorily mandated responsibility” to enforce net neutrality, and as such, exceeded its authority without first establishing formal rules over broadband ISPs.

As a result Tatel largely paved the legal road to the FCC’s Title II adoption, which he will decide the legality of in a little over a month. Despite his history with the FCC’s previous enforcement actions against broadband ISPs, he wasn’t chosen specifically for the case, according to the court, which chooses judges at random.

U.S. Telecom is leading the court challenge against the FCC in the federal appeals court, where the broadband lobbying group submitted a brief earlier this year arguing the agency overstepped its bounds in asserting Title II authority in the second Open Internet Order.

“The order represents an unprecedented transfer of regulatory power to the FCC without a clear warrant from Congress,” USTelecom said in July. “By defining the public switched network to reach every device that uses an IP address – everything from mobile phones to cars to refrigerators – the FCC has asserted authority to regulate a massive portion of the entire U.S. economy.”

Other groups submitting briefs in support of the industry argue the regulations will disincentivize investment in broadband, run afoul of ISPs First Amendment rights and that the rules adoption process was heavily politicized from the start.

The two sides will present their oral arguments during a two hour and 20 minute session on Dec. 4. The case could ultimately proceed to the Supreme Court.