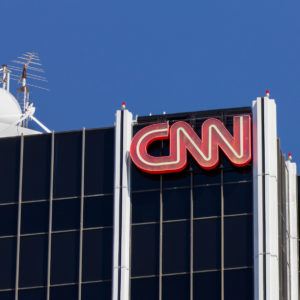 Meanwhile, as cable news networks continued their obsession with Donald Trump and his personal and sordid definition of sexual conquests, there was a hurricane in the midst …

Meanwhile, as cable news networks continued their obsession with Donald Trump and his sex talk, at least four law-enforcement officers have been murdered in the last week.

However, one wouldn’t know about either of those non-Trumpian events if one were so glued to CNN or Fox News Channel or MSNBC during the weekend.

Once the Washington Post released a tape late Friday afternoon that exposed Trump’s vulgar and pornographic view of women culled from a 2005 conversation between President George H.W. Bush’s nephew (also known as sycophant-acolyte Billy Bush of NBC’s “Access Hollywood” at the time), the real news world, at least in television media, ceased to exist.

Veteran newsman Bob Schieffer, appearing on CBS’ “Face the Nation” on Sunday morning, was moved to utter: “This goes beyond boys being boys. This is pigs being pigs.”

With that, thank God for The Weather Channel. Because The Donald sure enough hijacked a hurricane with his Trump Tales. Yes, sex talk can trump a deadly hurricane.

Forget Sunday night’s presidential debate theatrics; Hurricane Matthew was SUPPOSED to have been the No. 1 true news story of the weekend. Several meteorologists had predicted it could be the worst hurricane in a century to hit the United States. After all, the hurricane, according to Reuters reports on Friday, had caused at least 800 deaths in impoverished Haiti, the poorest nation in the Western Hemisphere that just can’t catch a break.

As the Category 4 hurricane churned through the Caribbean and headed for the Florida coast, the Big Three went wall-to-wall Matthew.

Fox News anchor Shepard Smith went all apocryphal on midafternoon Friday, shouting to anyone listening: “Over on our wall, a look at the storm track. The forecasters today have expanded the area where the storm may hit. See this? Melbourne, Daytona Beach, all the way to Jacksonville. This moves 20 miles to the west, and you and everyone you know are dead. All of you. Because you can’t survive it.

“It’s not possible unless you’re very, very lucky. And your kids die, too.”

Fortunately, Matthew’s potency lessened considerably during the weekend. But what about the storm’s aftermath?

Fortunately, The Weather Channel televised the hardships of our American colleagues. TWC, while the Big Three were magnetized by Donald Trump, Hillary Clinton and words of erotica, showed numerous folk being rescued on Sunday from hotels in Lumberton, N.C. Sturdy men, trudging along in waist-deep water, tugged small, flat boats and canoes filled with evacuees.

Amazingly, some of the rescued had fled the ocean shore to seek refuge at the hotels; in effect, they were double evacuees.

Think about it: If you are being dragged in a vessel through a hotel parking lot that suddenly transformed into a river on a Saturday or Sunday afternoon, the last thing on your mind is somebody named Trump or Clinton or Bush.

The Weather Channel reported at 9:30 ET Monday morning that at least 21 people in the United States had died because of Hurricane Matthew: 10 in North Carolina, five in Florida, three in Georgia and three in South Carolina. Twenty-one people.

How often did we hear casualty figures this past weekend on the Big Three cable networks, all of whom had dispatched armies of correspondents, camera-technology personnel and support staff to the southeast in anticipation of a once-in-a-lifetime catastrophe?

Then, they suddenly disappeared off the television screen.

By Saturday afternoon, we saw all Trump, all the time. Despite the deaths, despite at least 2 million folk without power in the southeast and despite an estimated $4 billion to $6 billion in economic damage resulting from the coastal destruction, wind damage and inland freshwater flooding.

As Republicans jumped off the Trump Train in droves over the weekend, how often did we hear of the law-enforcement officers gunned down in the past week.

On the afternoon of Oct. 5, Los Angeles County sheriff’s sergeant Steve Owen, 53, was shot and killed by Trenton Trevon Lovell. Owen, responding to a burglary call, was shot during “a calculated execution,” Sheriff Jim McDonnell said. Lovell, 27, was captured alive, a case that defies the mantra of the Black Lives Matter folk who have long stated that any black male who harms a police officer automatically will be shot and killed.

In the wee hours of the morning of Oct. 6, Blake Snyder, 33, a St. Louis County, Missouri, police officer answering a disturbance call, was shot and killed by 18-year-old Trenton Forster; on Oct. 8, Palm Springs, Calif., police officers Jose Gilbert Vega and Lesley Zerebny, responding to a domestic-dispute call, were shot and killed by gang-member John Felix, 26. Zerebny, a 27-year-old rookie, was the mother of a 4-month-old child; Vega, 63, was mere weeks from retirement.

How many of us remember intense coverage of the above assassinations? Well, it must be a ratings thing. Sex always has been a best-seller.

Still, one key question lingers: How many U.S. hurricane deaths would it have taken to see more in-depth coverage of Mother Nature’s unparalleled power? A hundred. Three hundred. How about Haiti-like casualties.

And what about the police officers?

Obviously, 21 and four, respectively, aren’t enough. Especially when Trumpster sex is inserted into the equation.