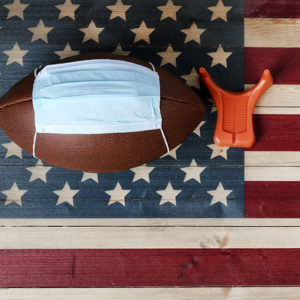 When Should Sports Return? Athletes-Turned-Fans Talk The Season of Coronavirus

Chinyere Okpaleke is a diehard Los Angeles Lakers fan. Her favorite man in purple-and-gold was Kobe Bryant, the legend who coined the “Mamba Mentality” state of mind.

“That mentality means you never give up, give your best to get better and give it relentlessly. “I have the ‘Mamba Mentality’ in everything I do,” she beamed from Florida to InsideSources.

That includes playing women’s college basketball at the University of South Florida 15 years ago to working as a family medicine physician today.

As an ardent fan, she would love to see the return of the NBA this season because her beloved Lakers, led by superstar LeBron James, have an excellent chance to win league championship No. 17 for the much-heralded franchise.

What should pro sports do about reopening the games in the midst of today’s coronavirus pandemic?

“Knowing the importance of sports,” the 34-year-old Okpaleke explained, “it’s a tough question. It’s important to keep the safety guidelines and I think it’s too early to make any decisions.

“I think we should wait until after May before we do. I think around June or July, we should be in better shape to make decisions. And we have to be concerned about a possible second wave of the coronavirus.”

Affectionately called “Dr. Chi” by her medical clientele and known as a tough rebounder by her opponents on the college basketball courts, Okpaleke said she has dealt with a handful of coronavirus patients and administered many tests, which mostly have been negative.

Another fan is Tyrone Keys, the 6-foot-8 defensive end on the unforgettable 1985 Chicago Bears team that steamrolled its way through that season, culminating with a 46-10 victory over the New England Patriots in Super Bowl XX.

When that Chicago powerhouse wanted to exert pressure on an opposing kicker, the team summoned the “Big Bear” because of his height.

“To me, until Major League Baseball can be played,” Keys, 60, told InsideSources, “no other sport should be on the table. Because baseball is the one sport in which social distancing is a natural part of the game. It’s the one team sport where you can play a whole game without touching anyone.”

And says Keys, who often auctions off autographed NFL paraphernalia to raise funds for youth scholarships, “Just cut out the high-fives.”

Earl Christy, now 77, remembers the various congratulatory hand gestures upon winning a pro title. He also is the answer to a cool trivia question: Who returned the opening kickoff in Super Bowl III, still the most shocking Super Bowl in history?

Christy was the one. Nicknamed “Earl the Twirl” because of his spin moves for the heavy-underdog New York Jets — who stunned the juggernaut Baltimore Colts in the 1968 season Super Bowl — Christy is pining for a Thanksgiving week start for the NFL season.

“We already know what football and Thanksgiving mean to most Americans,” Christy told InsideSources. “Also, by that time, we should have some kind of handle on this coronavirus thing.

“How about, with these 80,000-seat stadiums, you allow only about 10,000 fans, in order to practice social distancing and everything,” he said. “I’m all in for starting the season on Thanksgiving. Big time.”

Because of its ratings/viewership dominance in the sports arena, the NFL theoretically could play at any time of the year and maintain its super-hefty popularity.

What sports can we expect to see sooner rather than later?

“It would have to be the individual sports, such as golf and tennis,” said Okpaleke, whose parents immigrated to the United States from Nigeria. “Basketball and football should be later than sooner.

“And one good thing about the NHL is that players already wear masks, those face shields. In addition to that heavy padding.” Gloves, too.

Some observers have suggested that the NBA and NHL should adopt an NCAA Tournament basketball-style playoff system, should those sports return. One loss and you’re out, instead of playing multiple best-of-seven-game playoff series.

The stakes would be higher, that’s for sure. And the season would be expedited, no doubt.

Even Dr. Anthony Fauci, the nation’s No. 1 infectious disease doctor and No. 1 Washington Nationals fan, is yearning for a return to sports.

“People say, ‘Well, you can’t play without spectators,’” Fauci has iterated more than once. “Well, I think you’ll probably get enough buy-in from people who are dying to see a baseball game. Particularly me. I want to see them play again.”

As for the intensity of fan-less games in today’s environment, Dr. Chi related simply: Don’t worry about it.

“One good thing is that we practiced in empty stadiums; we scrimmaged in empty gyms,” she offered. “We were still fighting for a position on the team, we still had that edge, whether fans were there or not. So, athletes know what it is to play without fans.

“We won’t lose that competitive fire.”

And to win this current competition, we might need Kobe’s “Mamba Mentality” to ultimately crack the code of this coronavirus.