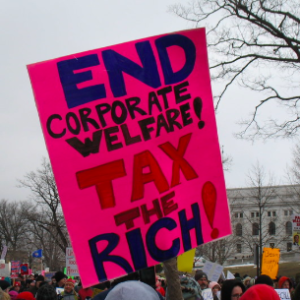 When the Facts Don’t Fit, Lie

As sure as the sun will rise in the east, we will hear American politicians calling for the rich to pay “their fair share.” But it seems those who make that call go out of their way to avoid the evidence that sits right in front of them.

Each year, the Congressional Budget Office publishes a report in which it details how much federal tax various income groups pay. Year after year, the data have pointed in the same direction. Counting all sources of income and all federal taxes, the poorest 20 percent of Americans pay an effective federal tax rate of around 2 percent, the middle-class pay around 17 percent, and the richest one percent pay over 30 percent. And these figures ignore transfers – money the government hands out to people. Include transfers and the numbers become even more wildly skewed, with more than the bottom half being net takers. On average, they pay no federal taxes at all. Counter to what we all hear, it’s actually the poor and middle class who aren’t paying their fair shares.

But when the facts don’t cooperate, politicians ignore them. They and their enablers simply lie. And that’s what three ProPublica authors, Jesse Eisinger, Jeff Ernsthausen, and Paul Kiel, have done in a recent bait-and-switch article in which they claim that the rich aren’t paying their fair share.

What this trio of charlatans has done is to redefine “income” to include unrealized capital gains – a definition that neither economists nor accountants nor even the IRS uses. For example, if Amazon’s stock price rises by 20 percent, causing the value of Jeff Bezos’ stock portfolio to rise by 20 percent, even though Bezos has not sold the stock, these three would call the increase “income.” Any principles-level accounting major would know this is incorrect. Income (specifically, a capital gain) occurs when an investor buys stock at a low price, then sells it for a high price. Simply buying it for a low price and watching the price go up doesn’t constitute anything.

With their new definition of income in hand, they find that the rich are paying very little tax. That’s hardly surprising as the IRS doesn’t tax unrealized capital gains. It taxes realized gains. And this isn’t some special treatment accorded to the rich. Everyone plays by these rules. When someone buys a house for $150,000 and later the value of the house rises to $175,000, everyone knows that the homeowner has not received $25,000 in income. Even the IRS wouldn’t come with its hand out looking for a bigger payment.

Now, if the owner sells the house for $175,000, that’s a different matter. So too with middle-class workers’ pension and retirement accounts. When a growing economy causes the value of houses, retirement accounts, and a host of other kinds of investments to go up, owners are taxed only when they sell the assets. Prior to that point, all reasonable people know full well that those investments are still investments.

Meanwhile, ProPublica has built a complicated web page with charts and graphs attempting to show how the rich are getting away with something that ends up meaning exactly nothing. But it’s really quite a bit worse than that. What we see here are people lying to achieve a political result that the truth won’t allow.