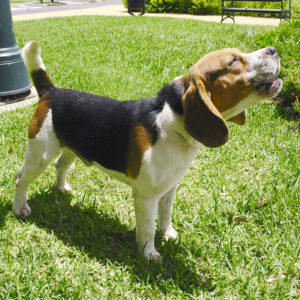 When the Howl Is Gone

For 11 years now, I have had the experience of walking into our house and hearing our precious but peculiar golden doodle howl as he greeted us. It has given us so many laughs, and tells us when he is particularly happy — as when our 20-somethings are visiting — and the howl can seemingly last forever.

We recently made the brave decision to add a puppy to our family. We applied human thought and said, “Nemo” (the old guy) will be able to mentor “Teddy,” (the new guy). My husband reasoned, “We are introducing an overlap dog to our family so that when Nemo’s time has come, we won’t be so bereft.” Nemo’s mortality is something I have consistently avoided thinking about, but the mentoring idea made hopeful sense.

Teddy is an energetic and very lovable puppy who is a natural fetcher (something Nemo is not), runs like the wind, and most important, recognizes Nemo as boss.  Except for a few rough weeks in the beginning where Nemo wasn’t sure he wanted another four-legged creature in the house, they have settled into a loyal pack. They play together, sleep together, and fight over the same toys together.

Teddy has certainly learned from Nemo — and this goes beyond knowing his place in the pecking order. However, one behavior change that we believe Nemo has acquired from Teddy is that he now seldom howls. We had hoped that Teddy would acquire Nemo’s howl, but instead we have lost most of the howl in our home.

I called my husband at work with a sadness suggesting something far more serious than “the howl is gone.” His response? “I wouldn’t get too upset. We don’t really know that much about how dogs think.” This did not assuage my sadness, even if he was right.

It has caused me to re-examine why I so acutely miss the howl. I suspect it has more to do with the aging process and how we cling to things that in some way warm us. Examples of this abound in my life. For lunch, I often find myself eating a toasted lettuce and tomato sandwich.  Yes, that is right. No protein, and lots of carbs, and fat, if you count the mayonnaise. Why? Because that is the sandwich I had as a child with my mother. Sometimes my daughter orders this sandwich at the cafeteria where she works. They often think she forgot to say “bacon” until she reminds them that she wants only lettuce and tomato — I made the same sandwich for her.

And it is not just sandwiches that have me connecting to the past. I have a passion for tennis, and when I see new young tennis players added to a team that I once played for, I appreciate how nervous and completely invested they are. I was once that way. At 61, I am happy to still be playing, appreciate the fun and friendship, and have stopped counting my wins and losses.

Thanksgiving can also induce a tender sadness. As a child, I placed black olives on my fingers before eating them, and then proceeded to relish orange-juice ice cubes with a Marciano cherry, which were intended for mixed drinks.

Decades later, when my son was in middle school, he helped me design my Thanksgiving menu which along with the traditional must-haves like stuffing and sweet potatoes, included far more adventurous dishes. One year we made pastrami salmon, and every day upon arriving home from school, he would rush to the fridge to check on the salmon, wrapped in gauze and spices. He still assists with creative menu planning, but his suggestions happen mostly by phone as he is (mostly) out of the house.

It turns out that missing the howl is about way more than the missing howl. I understand now that my sadness is because I am reluctant to let go of things that I hold dear. It is a kind of coming-of-age moment, where gratitude is mixed with wistfulness. It is one part appreciation, and one part longing as we push ourselves to find new ways to create and sustain meaning around us.

The howl serves as a marker for a rich history — in this case it is about my loyal dog. My husband had it right that we must continue to build new history while we cherish the old, which in this case includes one puppy who fetches, and one old codger who occasionally howls.