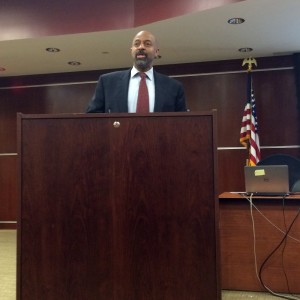 Roy Austin, deputy assistant to the president for the Office of Urban Affairs, Justice and Opportunity at the White House Domestic Policy Council, speaks at a University of the District of Columbia symposium on April 7, 2016.
News

A White House adviser delivered a little-noticed keynote address to a Black Lives Matter strategy summit on Thursday in Washington — and he left the crowd of activists with a single request.

Roy Austin, deputy assistant to the president for the Office of Urban Affairs, Justice and Opportunity, was the finale at the University of the District of Columbia law school’s daylong legal symposium, “From Protest Movements of the 1960s to #BlackLivesMatter: Legal Strategies for an Emerging Civil Rights Movement.” Many of the day’s presentations came from self-professed “radical” lawyer-activists, who linked systemic racism to the very foundation of America’s legal system and its capitalist economy. But while these speakers talked of advancing alternatives to the free market and overhauling the law to achieve social justice, Austin’s pitch was more modest.

Austin’s speech represented the latest instance of the White House interfacing with Black Lives Matter, an activist movement that swelled over the past few years after outrage over police-involved deaths of unarmed black citizens. The movement has faced criticism, particularly from conservatives, for its virulent rhetoric against law enforcement, property destruction during demonstrations and supposed suggestions that every life isn’t important. Responding to this “All Lives Matter” rebuttal, activists have said their point is that black lives ought to matter, yet they aren’t valued in contemporary society.

Obama met at the White House in February with high-profile activist DeRay Mckesson, who reported that they discussed a host of issues including police standards for use of force, juvenile solitary confinement and “school-to-prison pipeline.” Austin was there, and he told Thursday’s summit that activist voices must continue to be part of policing reform.

“It is important that these voices continue to be heard, and continue to be out there, and people continue to push, but let’s see if in the next 287 days we can’t actually make a little change,” he said, alluding to the coming end of Obama’s presidency.

Despite delivering remarks at a de-facto strategy session for Black Lives Matter, Austin rejected the notion that he was giving the movement advice.

Austin declined to discuss what the White House thinks of Black Lives Matter more broadly, but another of the day’s speakers, Jonathan Smith, said there’s at least respect for the group in the Civil Rights Division of the Department of Justice. That’s where Smith, the law school’s associate dean, was the chief of the special litigation who oversaw investigation of the Ferguson, Missouri, police department after the 2014 Michael Brown shooting.

“Within the Civil Rights Division, there’s a deep commitment to engaging communities, particularly communities of color, in the reform effort,” he told InsideSources. “While I don’t think anybody’s going to endorse the Black Lives Matter movement … they were very important voices.”

Smith noted that he and his colleagues engaged with all sorts of stakeholders on these matters, but said, “I think there’s respect for the incredible organizing that young people have done.”

Austin used to be Smith’s boss in the Civil Rights Division, serving four years as deputy assistant attorney general before moving to the White House.