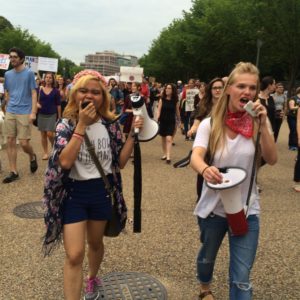 Demonstrators outside the White House Monday condemned the recent white supremacist rally and deadly violence which attracted national attention over the weekend.

Charlottesville, Virginia, has become a hot spot of racial tensions in recent days. White supremacists displaying Nazi symbols descended on the college town for a Saturday rally that was marred by violence and even the death of a counter protester. Activists gathered in Washington D.C. to denounce the rally and its backers.

The White House protest is just one of several demonstrations that have have been organized in the days since the violence. Protesters expressed concern over the increased popularity of extreme right ideologies and what they view as an inadequate response from President Donald Trump, who faced criticism from across the political spectrum for failing to condemn hate-fueled ideologies.

After extensive criticism over the weekend, the president followed up his earlier statements on Monday by condemning racism as evil.

“We condemn in the strongest possible terms this egregious display of hatred, bigotry, and violence,” Trump said. “Racism is evil, and those who cause violence in its name are criminals and thugs, including the KKK, neo-Nazis, white supremacists and other hate groups that are repugnant to everything we hold dear as Americans.” 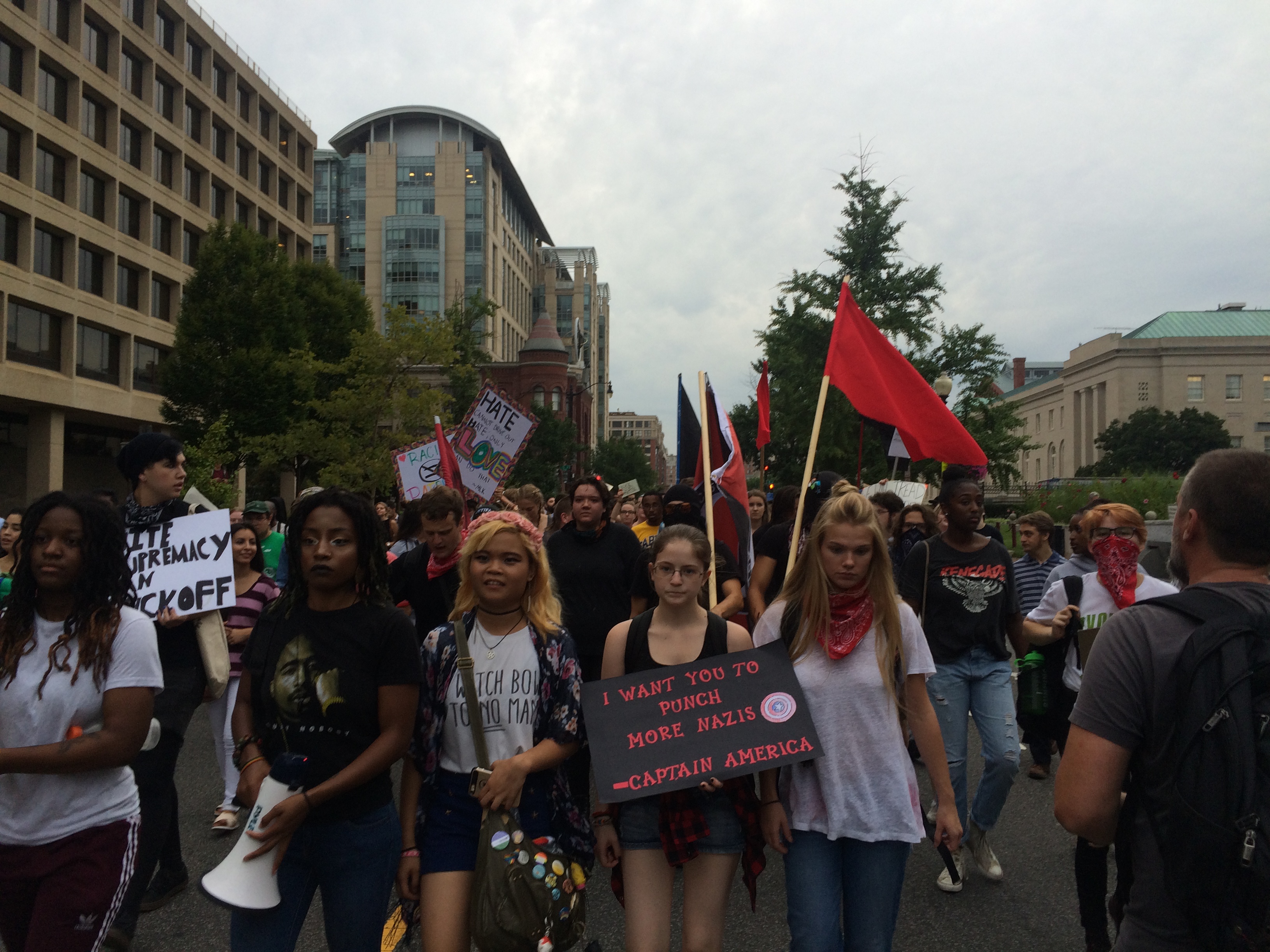 Demonstrators gathered outside the White House where a handful of speakers had the chance to talk to the crowd. They then marched through the city blocking roadways as they progressed. They passed Trump International Hotel before proceeding onto the D.C. Superior Court building.

“I felt I needed to be a part of something immediate because of course I hope to live my life, to the best of my ability, in a way that will dismantle white supremacy and support my brothers and sisters and everyone else,” Siera Hanks, a demonstrator from Kentucky, told InsideSources. “But I just needed to do something immediate to kind of mourn.” 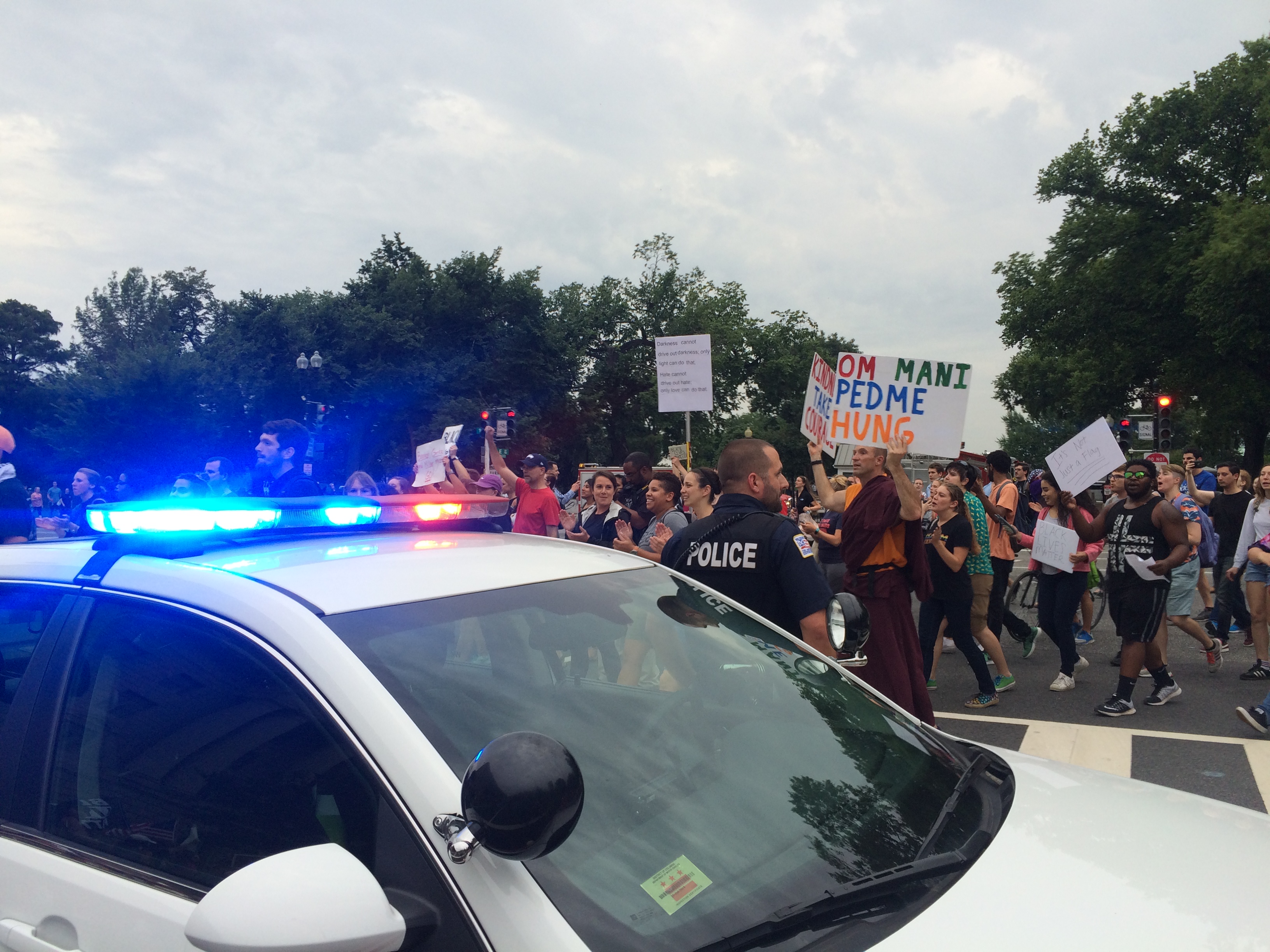 The Charlottesville rally was organized in response to the removal of Confederate monuments from public spaces. Rally participants had gathered in Emancipation Park which had a statue of Confederate General Robert E. Lee, which is slated to be removed. The rally included white supremacists, white nationalists, alt-right activists, and neo-Nazis.

“People are going through different times, different struggles, and people want to see results, but no one is getting one, when it comes to police brutality, different sexualities, different things with the presidency,” a protester outside the White House who identified himself as Phasio told InsideSources. 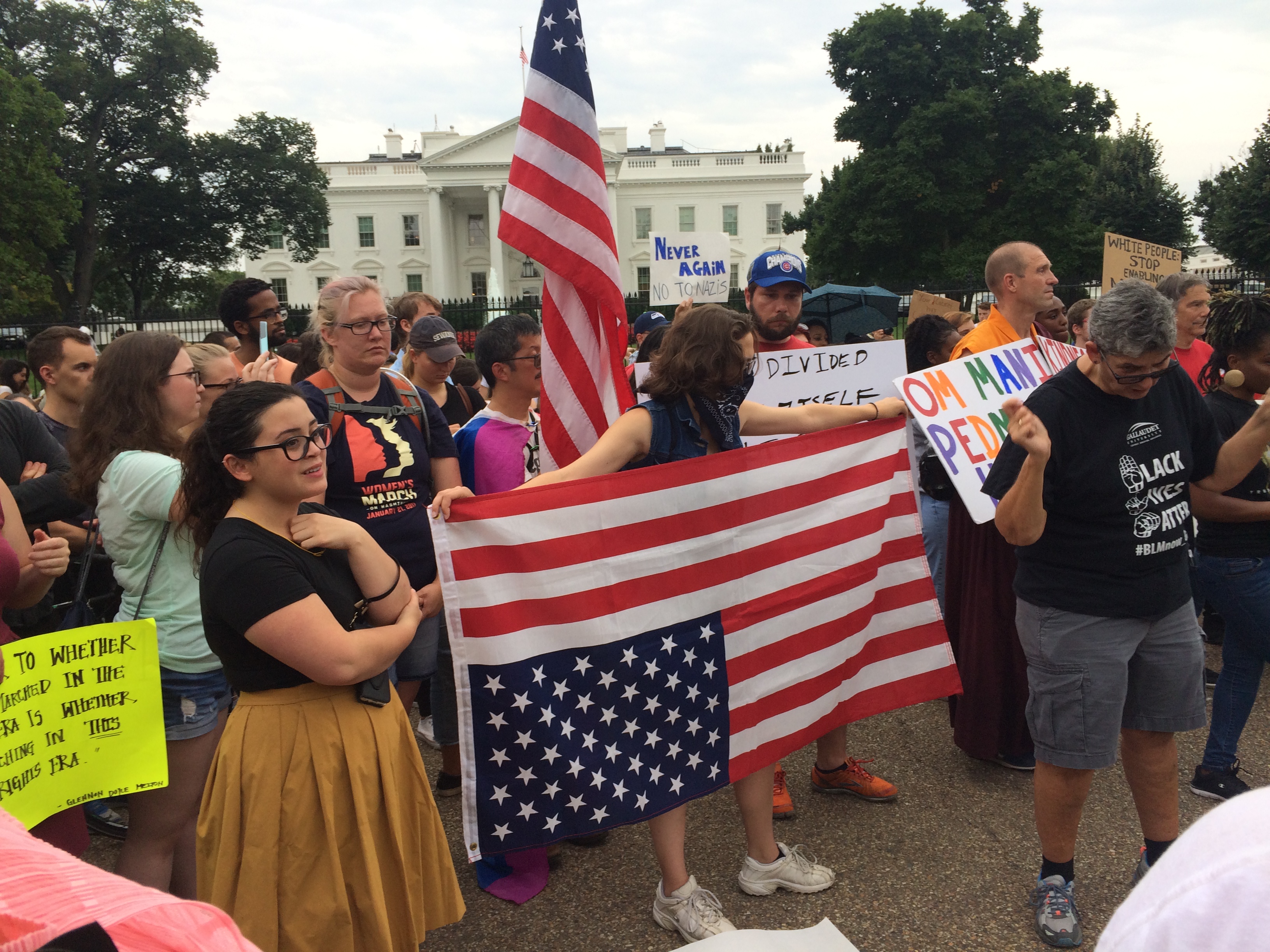 Heather Heyer was killed Saturday when a participant in the white nationalist rally crashed his car into a group of counter protesters. She was outspoken against white supremacy in her online posts. Organizers of the event outside the White House held a moment of silence for her while calling her a hero of the cause. 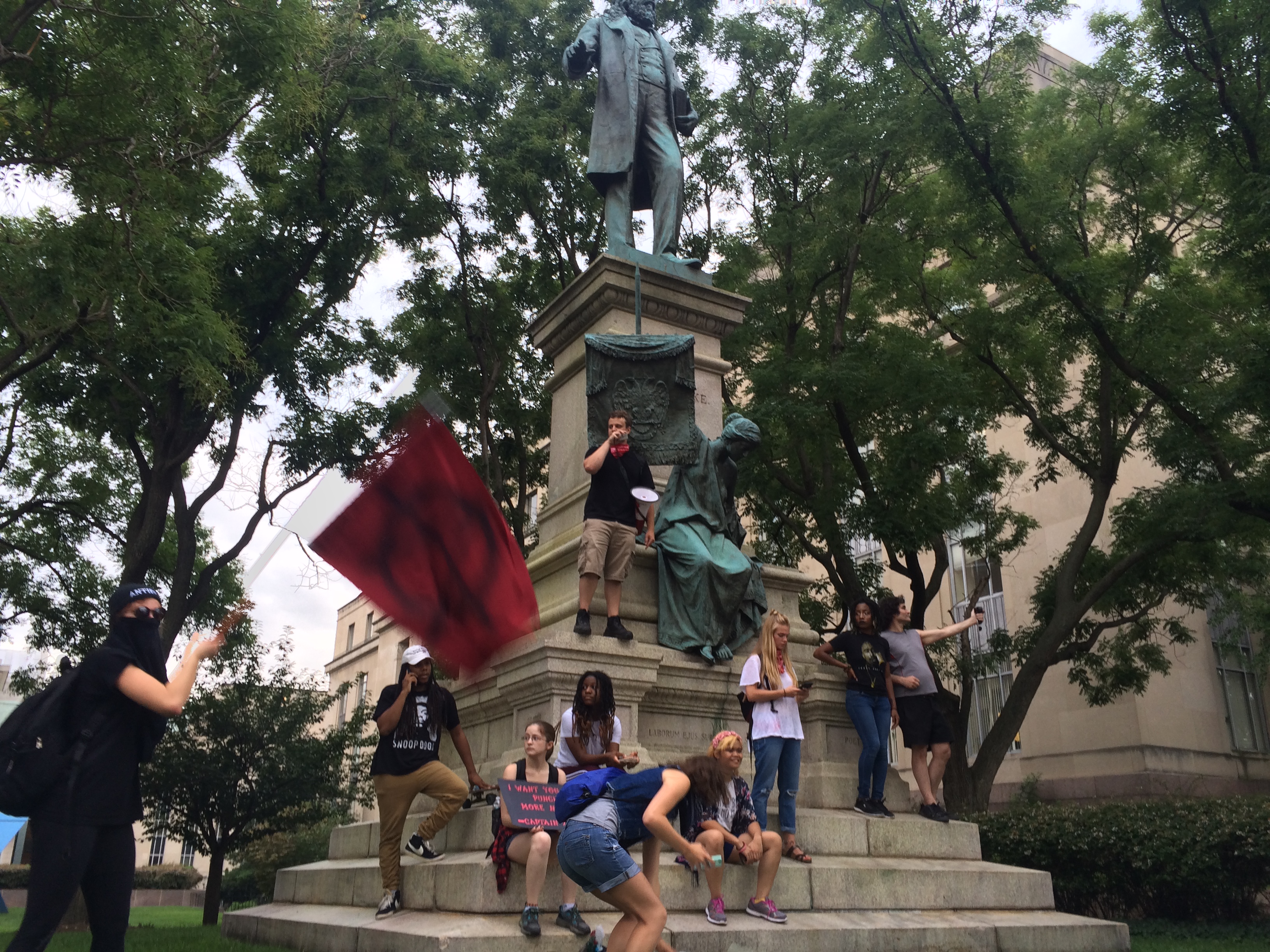 “I think the lady who died, her last Facebook post said everything,” a protester who preferred to remain unnamed told InsideSources. “She said when good people do nothing, that’s when evil prevails. So I’m out here doing something because I’m sick of what’s going on with the United States right now.” 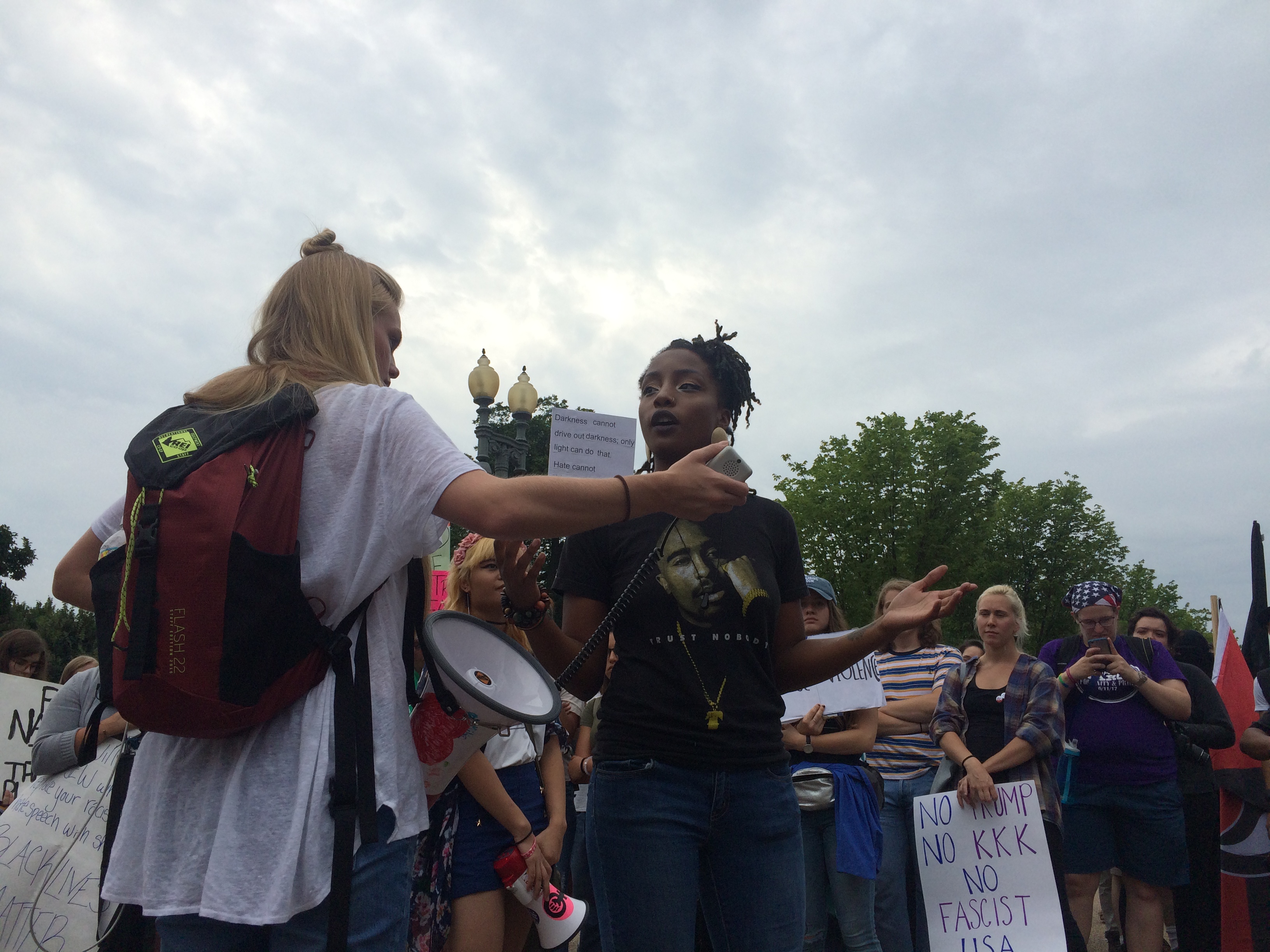 Attorney General Jeff Sessions denounced the racially-driven violence as an act of domestic terrorism during an interview with ABC’s Good Morning America. The U.S. Justice Department has since opened an investigation into the incident.

“I was in Charlottesville this weekend,” an unidentified woman wearing all black and a mask told the crowd. “I was on medic dispatch so I was the first person, one of the first people, to get the info that people were mowed down by a car.” 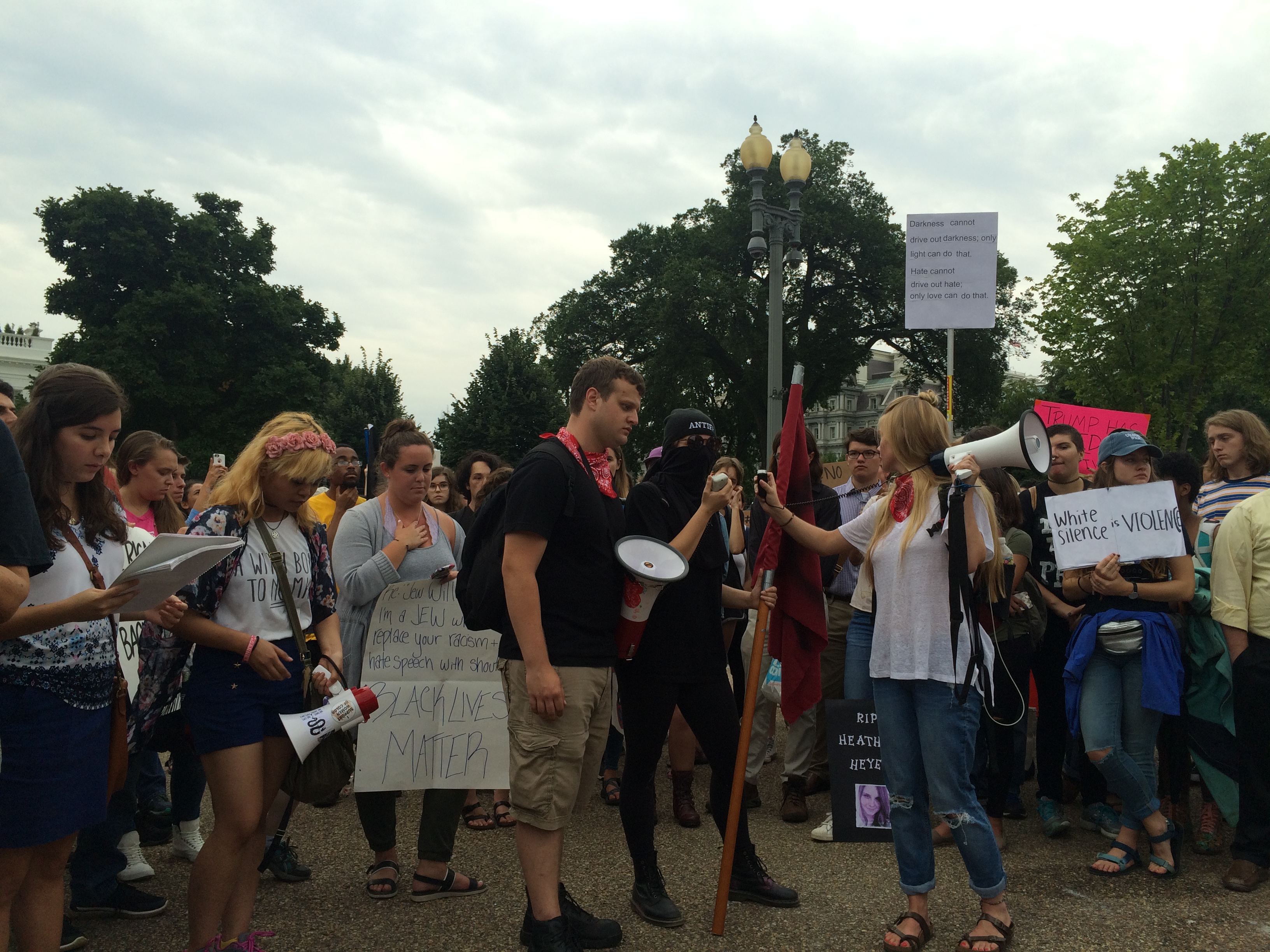 The unidentified woman also denounced people arguing white supremacists have the right to protest and express their views. She argued that right should not include people who use their speech to advocate violence against others.

“I think that speech that brings about violence should never be allowed,” the unidentified woman said. “Hate speech should also be condemned. It’s not just an opinion, it’s straight up violence.” 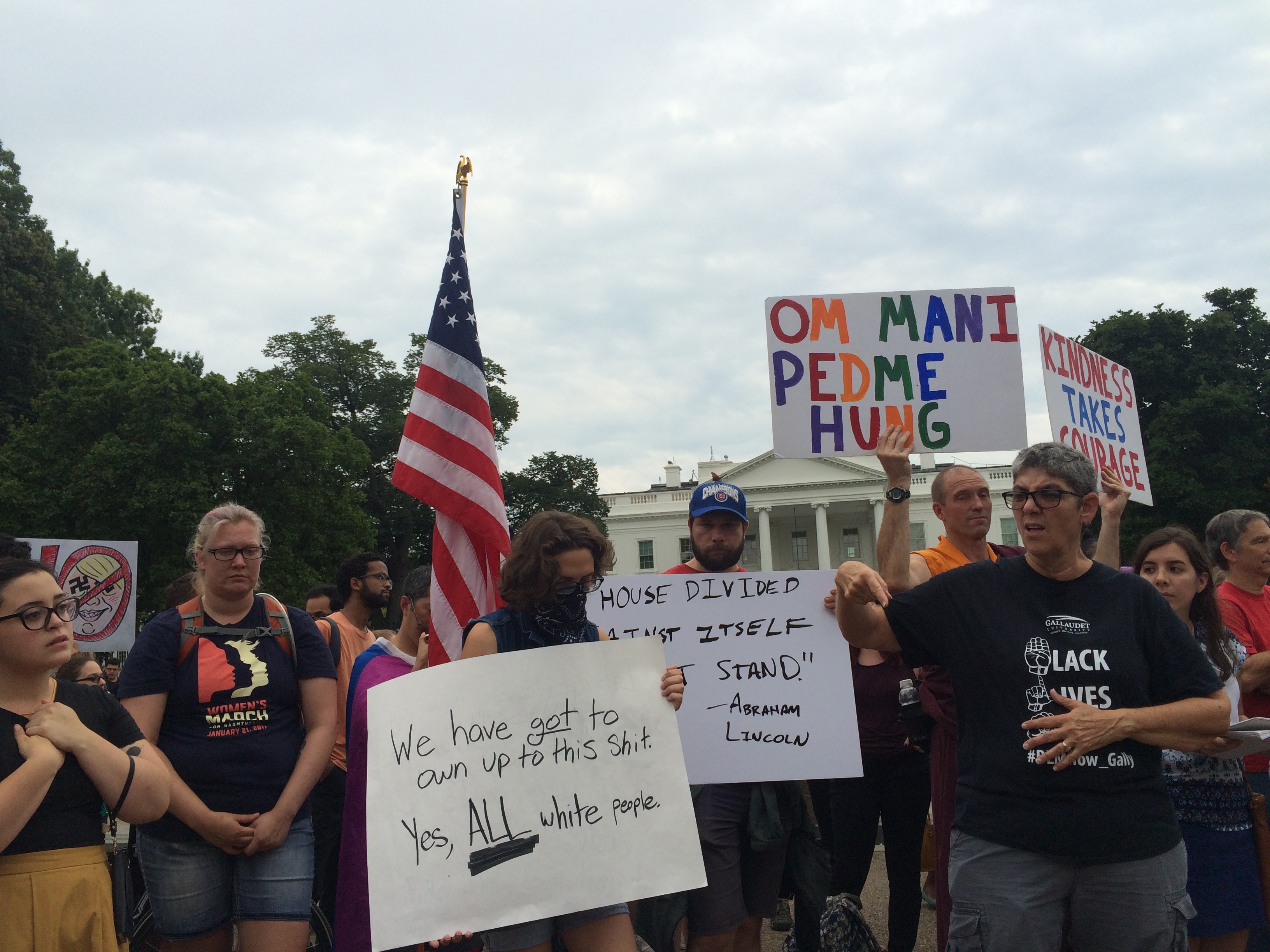