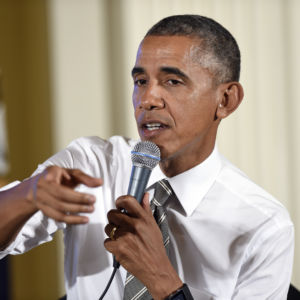 For the first time ever Wednesday, the White House held a day-long “Summit on Worker Voice,” with speeches and panel discussions about the future of working in the United States.

President Barack Obama, Vice President Joe Biden, and Labor Secretary Tom Perez were among the speakers who praised the role of the labor movement in the country’s history, and the president said America’s middle class itself was “built on a union label.”

Anxiety about labor’s decline in recent decades was also front and center. Obama noted that this trend has coincided with a rise in inequality, and he identified a key challenge unions face if they hope to regain strength: attracting young people.

“You’ve got a whole millennial generation who knows they’re not getting a good deal in the workplace, but don’t consider joining unions,” the president said. In his view, this is partially because laws have been set up to make unionizing difficult, but also because few young people live in towns with robust union traditions.

“We’ve got to adapt to that, and try to find new ways of bringing people in,” Obama said.

As Atlantic contributor Jonathan Timm pointed out in September, union membership in the U.S. is “lowest by far among Millennials,” despite the fact that this generation has uniquely positive feelings about labor: “Earlier this year, Pew found that, while opinions about unions are evenly split among older generations, the majority of young people view them favorably.”

Timm cites the June decision by Gawker, “a prototypical Millennial media company,” to unionize as a potential game changer. And in fact, Gawker has since spurred unionization at Salon, Vice, the Guardian US, and Al-Jazeera America. On Wednesday morning, Gawker’s own Hamilton Nolan reported that Huffington Post employees have begun their own unionizing campaign.

Nolan appeared on a panel at the White House summit later in the day, and he was asked about Gawker’s successful organizing. He said employees at the new media company adopted a strategy that was decidedly old fashioned: “The thing that worked better than anything else was one-on-one conversations, talking to people face to face. We tried to actually use technology during our campaign. We had a chat room. We had a lot of conversations on instant messenger. But the gold standard for communication was still people talking to people.”

Nolan also echoed Obama’s comments about millennials lacking basic knowledge about labor institutions. Moving forward, he said, “There needs to be a lot of education and talking to people about what unions are, what the benefits of unions are.”

Also on the panel, Anne Johnson of the liberal group Generation Progress said millennials care about many of the same issues labor cares about, but “they’re also kind of skeptical of institutions,” including unions.

Some conservatives voiced their own skepticism of the White House summit Wednesday. Diana Furchtgott-Roth, a Manhattan Institute scholar who co-authored a book on “How Washington Is Betraying America’s Young,” wrote that the event didn’t address the “plight of workers trapped in a union” against their will. She criticized the National Labor Relations Board for instituting a quick system for union formation and a difficult, protracted process for union disbandment. Few conservatives are opposed to union organizing, but they support Right to Work laws that allow workers to decide whether to join rather than make union membership mandatory.