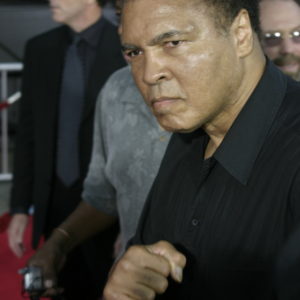 During its numerous tributes and remembrances of Muhammad Ali, ESPN often has played a mesmerizing 1980s song by Peter Gabriel and Kate Bush for voiceover music.

It’s a perfect blend of somber tones and hopeful inspiration for the moment. The song: “Don’t Give Up.” A few lyrics:

Ali died at 12:10 a.m. Saturday Eastern time, June 4. A public funeral will be held for him Friday in his hometown of Louisville, Ky.

On Friday, as intimated in the song, his friends are coming by for a visit. On the friends list: Bill Clinton, Billy Crystal and Bryant Gumbel, all of whom will deliver eulogies. Another friend, Republican senator from Utah and Mormon Orrin Hatch, once an amateur boxer himself, also is scheduled to speak at the diverse, interfaith service.

Fifty years ago, that lineup mourning Ali would have been unfathomable. Fifty years ago, Ali railed against “race-mixing,” blindly iterated that Nation of Islam leader Elijah Muhammad taught him that white folk were “blue-eyed, blond-haired devils.”

Fifty years ago, if someone would have told you Ali would become the most beloved person in the world after being the most hated, you would have called Dr. Phil to have one of his patented “get real” talks with that person.

When Ali died, the world decided to pause for the cause. With that, most of us only know or only wish to know the sanitized version of Muhammad Ali.

In fact, Ali himself once told the BBC, “Maybe my Parkinson’s is God’s way of reminding me what is important. It slowed me down and caused me to listen rather than talk. Actually, people pay more attention to me now because I don’t talk as much.”

That’s the upstart Ali who renounced his birth name, “Cassius Clay.” He disparagingly referred to it as his “slave name” the day after beating a boorish bully named Sonny Liston on Feb. 25, 1964, for the heavyweight championship of the world.

That’s when we universally met Muhammad Ali, who, only three years later at a youthful 25, was stripped of his heavyweight title as he resisted the military draft, screaming, “I ain’t got no quarrel with no Viet Cong.”

He lost his passport, his boxing licenses, his livelihood while facing a five-year prison term (no actual time served) for defying, as a conscientious objector, what he termed an unjust war.

Ali not only said no to the federal government; he also, unwittingly or not, steered the anti-war movement.

Who does that? Especially an athlete. And especially a black athlete during the 1960s, when segments of the nation were in the throes of de facto, if not legal, segregation, with black folk rendered as second-class citizens, mainly in the South. That meant colored and white restrooms. Colored and white restaurants. Hotels. Swimming pools. Housing. Separate and unequal.

You want to know why millions of black folk revered Ali for taking a stand, despite anti-Ali sentiments from such black luminaries as Jackie Robinson and Floyd Patterson, here’s why.

“Why should they ask me to put on a uniform and go 10,000 miles from home and drop bombs and bullets on brown people in Vietnam while so-called Negro people in Louisville are treated like dogs and denied simple human rights? No, I’m not going 10,000 miles from home to help murder and burn another poor nation simply to continue the domination of white slave masters of the darker people the world over.

“This is the day when such evils must come to an end. I have been warned that to take such a stand would cost me millions of dollars. But I have said it once and I will say it again. The real enemy of my people is here. I will not disgrace my religion, my people or myself by becoming a tool to enslave those who are fighting for their own justice, freedom and equality. If I thought the war was going to bring freedom and equality to 22 million of my people, they wouldn’t have to draft me, I’d join tomorrow. I have nothing to lose by standing up for my beliefs. So I’ll go to jail, so what? We’ve been in jail for 400 years.”

That lengthy soliloquy alone encapsulates the love affair between Ali and black folk around the world.

And the ironic twist to all this is that Ali likely wouldn’t have seen combat. The heavyweight champion of the world in a Vietnamese rice paddy with an M-16 rifle? No way. He probably would have been relegated to a symbolic presence in the Vietnam War, similar to boxer Joe Louis in World War II, meaning Ali would have participated in USO tours, charity boxing matches and causes to raise troop morale.

Ali, however, still said no to the government.

The price he paid for 3 1/2 years lost in the prime of his career: No big-money fights. No commercial endorsements. Just appeals in the court system. And a lot of free time.

So, Ali waited. And he tried to improve his reading skills.

He needed money; his income outlets were colleges, which paid him to speak. Between 30 and 40 grand a year; not millions, as his legal bills mounted. His anti-war message resonated with young folk, especially white college students, of course.

In 1971, the U.S. Supreme Court overturned the conviction against the former title-holder, who later regained his bling in the ring. He was a free man.

However, something else happened in his most complicated story. Disillusionment.

By 1975, a more socially aware Ali began to question the racially separatist teachings and hedonistic lifestyle of Elijah Muhammad, the Nation of Islam leader. In fact, Thurgood Marshall, this nation’s first black U.S. Supreme Court justice, once said Muhammad’s organization was “run by a bunch of thugs organized from prisons and jails …”

Ali mellowed; he went more mainstream (listen to his spellbinding ’75 speech at Harvard). Plus, the country was changing; desegregation was becoming more the national norm.

We often hear and read about Ali’s conversion from Christianity to Islam in the 1960s. What’s not often discussed in the media was Ali’s other conversion: from black separatism to international assimilation that hatched in the late 1970s and lasted until his death.

That brings us to the other side of the ledger: Why do many white folk revere Ali.

White folk appeared to embrace a more delicate Ali. A muted humanitarian, instead of loudmouth poet.

A changed Ali once said: “Hating people because of their color is wrong. And it doesn’t matter which color does the hating. It’s just plain wrong.”

Perhaps the charismatic Ali learned that to appeal to the masses, the message is simply this: You don’t always have to be loud to be heard.

We saw his evolution: “I wish people would love everybody else the way they love me. It would be a better world.”

As the song says: “We’re proud of who you are.”