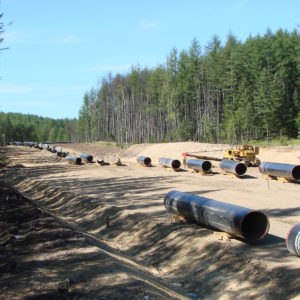 The Delaware Riverkeeper Network, which relies partially on government funding, has repeatedly taken a government agency to court only to be rebuked for its frivolous claims.

Like the IRS, the Federal Energy Regulatory Commission is one of many federal agencies that doesn’t have many friends. FERC is the body responsible for granting federal permitting to oil and natural gas pipelines and also oversees electricity transmission organizations. This role places it between environmentalists and developers. Energy developers, encouraged by FERC’s recent approval of six new pipelines, want the agency to operate with a relatively light touch. Meanwhile, environmentalists accuse the commission of simply rubber stamping industry requests. This charge was the subject of a lawsuit by the Delaware Riverkeeper Network against FERC in federal court which was decided on Wednesday.

“Because FERC gets its funding from the big companies it is supposed to be monitoring, it has become, perhaps inevitably, a corrupt, rogue agency,” Maya van Rossum, longtime leader of the Delaware Riverkeeper Network, said in a statement.

The argument was dismissed in court, where Judge Tanya S. Chutkan rebuked the environmentalist group for its poor understanding of the statute that creates and governs FERC. Chutkan wrote that the bulk of FERC’s budget is funded by Congress, not fees from approved pipelines. If the riverkeepers were unhappy with the money spent, “recourse lies with their legislative representatives,” the judge said.

“FERC stands to gain no direct benefit from the approval of a particular pipeline project,” Judge Chutkan said. “The connection between the act of approving an individual pipeline and the financial sustainability of the commission as a whole is simply too remote to create any such bias.”

Wednesday’s lawsuit was not the first time that the Delaware Riverkeeper Network has unsuccessfully sued FERC. In 2016, it filed a similar lawsuit alleging pro-pipeline bias and corruption in FERC, a lawsuit which they also lost. In 2014, the environmentalist group also filed a lawsuit alleging that FERC did not properly complete environmental assessments. Again, the riverkeepers lost their case and were rebuked by the judge for filing briefs filled with technical minutia.

Given the organization’s poor track record blocking pipeline projects, it is somewhat surprising that it has continued to operate for as long as it has. Founded in 1988 by Maya K. van Rossum, the group exists to protect the entirety of the Delaware river watershed and has engaged in activism in Pennsylvania, New Jersey, Delaware, and New York.

Most of the group’s funding information is not public record and donations are hard to trace. A copy of its 2013 tax return revealed that major donors included the William Penn Foundation, the Geraldine R. Dodge Foundation (Dodge was a grandniece of John Rockefeller), and the Wallace Research Foundation and Woodtiger Fund (both organizations funded by descendants of Henry Wallace.)

If donors are difficult to trace, where the money went is similarly mysterious. According to tax documents, in 2014 (the most recent year for which records have been digitized), the Delaware Riverkeeper Network received $104,834 in government grants. This was just a small percentage of its overall receipts, which totaled just shy of $2 million. What is more surprising is where the money went.

Previously, some local observers have criticized the group for conflicts of interest. Debby Colgan, the chairman of the board, is the sister of Tracy Carluccio, the deputy director. In addition, van Rossum herself both sits on the board and serves as the group’s seeming executive director. (Although her title is “Riverkeeper,” she has a leadership role for the group and the organization only lists a separate deputy director.)

Having lost its attempt to curtail FERC, the group remains committed to its goal of slowing energy development. On Wednesday and Thursday, the Delaware Riverkeeper Network was continuing its activism with a two-day phone in asking members of the Energy and Natural Resources committee to investigate FERC before approving another appointee to the commission. Until this third member is approved, FERC will be operating without a quorum.

And the Delaware Riverkeeper Network doesn’t limit its advocacy to stopping pipelines. Its website includes a list of increasingly specific “hard issues” that the group has strong opinions about. These issues range from monitoring bridge replacement projects for potential environmental contamination, to appealing zoning decisions which would allow for the development of shale energy resources in Pennsylvania, and fighting the installation of artificial turf fields.