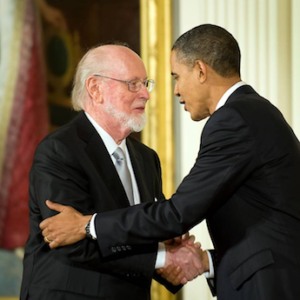 Who do you get to revamp “The Star-Spangled Banner”?

Since becoming our national anthem in 1931, Francis Scott Key’s composition has been made an American fixture — a staple of school bands, a ritual at military ceremonies and sporting events, and a key part of the pomp and circumstance of public life.

The piece is so popular, one poll showed nearly 80 percent of U.S. adults want it kept as the country’s official song — some rare political consensus in an age when we can’t seem to agree on anything.

In this context, a bit of trepidation would have been justified for organizers of the annual Independence Day concert on the West Lawn of the Capitol in 2014, when they commissioned a contemporary composer to rearrange the anthem on its 200th birthday. This wasn’t an audience at some local armory, after all. The piece would be performed for a sea of flag-waving humanity on the National Mall and broadcast to millions more on PBS, NPR and the Armed Forces Network. In other words, it had to be good.

But when the moment arrived, and an overeager television host threw to the musician who would conduct the National Symphony Orchestra, the Joint Armed Forces Chorus, the U.S. Army Herald Trumpets and the Choral Arts Society of Washington, viewers were not disappointed. On stage, wearing white that matched his wispy beard, was John Williams, introduced without controversy as “America’s greatest living composer.” The maestro gave some music history, raised his baton and, with trumpet fanfare and Timpani drum, began the show.

On Thursday in Hollywood, the 84-year-old Williams became the first composer to receive the American Film Institute’s Life Achievement Award — a fitting honor for the man the Wall Street Journal once called “the Last Movie Maestro.” He’s left an indelible mark on our culture with themes for “Star Wars,” “Superman” and “Harry Potter,” and he’ll be presented with his prize by his longtime collaborator Steven Spielberg, having worked on nearly all of the iconic director’s projects.

Lifetime recognition may be the only remaining decoration Tinseltown can bestow on Williams, whose Academy Award nomination record is bested only by Walt Disney. He’s already won a Kennedy Center Honor. In 2010, President Barack Obama hung a National Medal of Arts around his neck and called him “a preeminent composer and conductor” whose music “defined and inspired modern movie-going for decades.”

And yet somehow, all this seems slightly inadequate. In terms of legacy, Williams isn’t in the same league as the other top film composers of our day — even extraordinary talents like Hans Zimmer, Danny Elfman, Howard Shore and Williams protege Thomas Newman, who will continue to score the silver screen after he’s gone. And that’s because, truth be told, this particular maestro matters to more than the movies.

Throughout his career, Williams has written the majestic musical themes for pillar cultural institutions in American life — the Olympics, Sunday Night Football, “NBC Nightly News.” And as evidenced by his national anthem assignment, there’s no more reliable resource in moments of high patriotic pageantry, making him almost like the John Philip Sousa of our time. Williams composed “Liberty Fanfare” for the centennial of the Statue of Liberty and “American Journey” for a millennium celebration in Washington, D.C. He arranged “Air and Simple Gifts” for Obama’s first inauguration. (Less memorably, as a great admirer of the 1988 Democratic candidate for president, he wrote and performed “Fanfare for Michael Dukakis” at the convention that year.)

Williams has done a fair amount of presidential scoring on screen as well. He composed for Oliver Stone’s “Nixon” and “JFK,” in addition to Spielberg’s “Lincoln.” It’s his stirring strains under Anthony Hopkins’ big speech reckoning with slavery as John Quincy Adams at the end of “Amistad.”

And that sequence, which both acknowledges the nation’s original sin and invokes its noblest principles, is as useful an illustration as any of Williams’ enduring appeal. Amid all the country’s shortcomings and institutional faults, he helps us find unabashed patriotism and pride, serving up sweeping and sentimental romanticism that reminds us of the goodness and even grandeur of America. It’s our essential optimism, adapted for orchestra.

Relaying the history of the “The Star-Spangled Banner” on the Capitol lawn, Williams talked about how Americans can be united through “the power of music” and a “proud old tune.”

The patriot who scored “The Patriot” certainly knows that well.