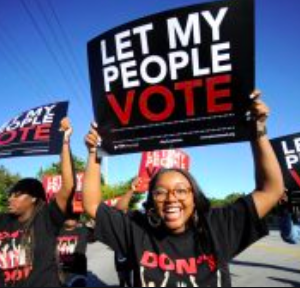 If political participation is the heart of American democracy, then black women are its lifeblood.

Each election cycle, we donate to campaigns, organize voter registration drives, canvas neighborhoods, drive citizens to the polls, and vote at the highest rates of any demographic group.

We watch as experts scratch their heads trying to explain why black women, who are at the bottom of economic, social and health indicators and endure rampant voter suppression, remain one of the largest and most politically active demographics of voters. Are black women hopelessly optimistic or pitifully naïve? Neither. Black women are resilient, pragmatic, aspirational and strategic.

Black women spend their lives navigating the obstacles of structural racism and gender discrimination. We endure rampant police violence, sexual assault and have disproportionally high rates of maternal and infant mortality.  Our communities have been ravaged by mass incarceration and we’ve continued to face discrimination in employment and housing.

Unlike our white male counterparts, society expects us to settle for less than we deserve and to keep quiet about any anger or pain we may feel about our conditions. We are told we have no reason to be angry and no right to demand full access to the American dream. The American media and political organizations do not trip over themselves trying to soothe, mollify, woo and retain black women.

But we are not martyrs, mammies or mules — we are shrewd and perceptive breadwinners, voters and change makers.  Political participation has become our powerful and necessary survival strategy.

Voting early, voting often and voting our values are civic lessons passed down to us by our ancestors. Women like Mary McCloud Bethune, who taught reading classes at night and went door-to-door raising money so black citizens could overcome racist literacy and poll tax requirements to vote.

Women like Ella Baker, an unsung hero of racial and economic justice, and mother to the Student Nonviolent Coordinating Committee who spent her life fighting to ensure young people of color owned their power to change the world. Women like Shirley Chisholm, the first black woman elected to the U.S. House of Representatives, who famously said, “You don’t make progress by standing on the sidelines, whimpering and complaining … you make progress by implementing ideas.”

Voting is also about our spiritual strength passed down by our ancestors. Voting allows us to marshal our agency to love ourselves, to write our own history, and to use our anger in the service of hope for a better world.

Despite having plenty of reasons not to participate, despite continuous efforts to support our vote,  we continue to channel our collective anger, frustration and consistent disregard into strategic and effective civic engagement — our proven strategy for building sustainable political power.

And our political power is only growing. As electoral demographics continue to shift, black women voters will increasingly shape the results of close elections.

Since 2000, the number of eligible black women voters increased by 31 percent. Parties and political candidates would be unwise to take our votes for granted. Recent electoral victories are not the result of smart campaigns, so much as the result of a long-standing tradition of black women in churches, sororities and beauty parlors from Montgomery to Greensboro to Detroit.

Look at the 2017 election of Senator Doug Jones, D-Alabama, whose victory is really due to the high turnout numbers of black women. The historic wins for the Democratic Party in 2018 are the result of black women.

According to a report by the NAACP, the Advancement Project and the African American Research Collaborative, black voters overwhelming supported Democratic House candidates in those competitive house races. It’s important to remember, black women voters are the most reliable and most engaged demographic. We not only dare to hope, or dare to vote, we  organize others to do the same.

In the wake of many barriers and suppression tactics thrown in our way, we maintain our hope and commitment to the ideal of America. It can be difficult and painful. It requires patience and resilience.

But we know voting puts legs on our hope and we know it’s the most sustainable source of change.

The Rev. Dr. Renita J. Weems is a senior fellow at the Center for American Progress. She is a distinguished biblical scholar, author and academic administrator, and has been an ordained elder in the African American Episcopal Church since 1984. She wrote this for InsideSources.com.