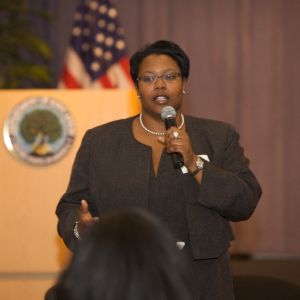 Describing education as “probably the most change-resistant industry,” D.C. Public Schools Chancellor Kaya Henderson spoke publicly this past Friday about technology’s potential to transform American classrooms in the coming decades.

Henderson, who is widely recognized as a national leader on school reform, told a tech entrepreneurs conference, hosted by the D.C. start-up hub 1776, that the internet has already created unprecedented opportunities for students. In the District of Columbia, these include access to online learning resources, the chance to connect with peers around the world and the ability to complete internships at local tech firms. One group of students who recently interned at Microsoft even went on to create their own gaming company, T-Street Games, based out of 1776.

“They graduate in June, and they’re going to college next year with money in their pockets and a track record of success in a technology field,” Henderson said. “I think that’s game changing, especially for kids from some of the neighborhoods that we serve.”

But the chancellor also argued that technology could be doing more to help the students with the most need, given that many of today’s education tech products “are really geared towards more upwardly mobile populations.”

“Schools have the worst flipping networks,” she said. “Even in our fully modernized, brand-spanking new buildings, I have to turn off the Wi-Fi and use my regular phone to get my regular data. It’s insane. Why can’t we just wrap the whole city in Wi-Fi?”

Another change Henderson would support is less restrictive firewalls on school networks, which would allow students to access a greater number of websites.

“My kids can’t get on YouTube, because then people think that they’re watching, you know, hoochie mama videos or whatever, when in fact there’s lots of educational content on YouTube. Teachers have to call to explain what they’re doing to get the firewall — come on! … Just give it to the people and let the people do their thing,” she said.

Prior to talking about technology in schools, Henderson used her 1776 appearance to defend the controversial Common Core education standards, which D.C. has fully embraced. She said other countries have made gains in education “through nationalizing standards and really marching the whole country in a direction.” According to Henderson, Common Core in the United States “means that every state isn’t going to be trying to figure out how to do something different.”