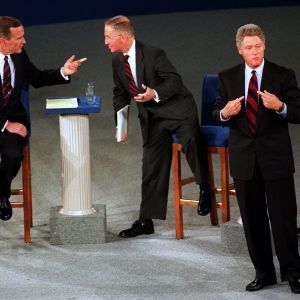 The 2016 presidential primary debate season officially begins this week, with all 17 Republican candidates scheduled to appear on Fox News on Thursday. There is some grumbling ahead of the event, since, as Reuters reports, “only the top 10 candidates based on an average of recent national polls will be allowed on stage at the 9 p.m. The remaining seven will face off earlier in the day, at 5 p.m., a time when far fewer viewers will be tuning in.”

This scheduling drama may be the controversy of the moment, but there’s something else voters should be thinking about as they tune in this week: the fact that presidential debates aren’t really debates at all.

As “Face the Nation” host John Dickerson noted on last week’s Slate Political Gabfest, these primetime confrontations are essentially “parallel speeches given in close proximity.” Candidates rarely engage with one another directly, instead sticking to prepared statements delivered straight to camera.

For an explanation of this phenomenon, InsideSources turned to Northeastern University professor Alan Schroeder, author of Presidential Debates: Fifty Years of High-Risk TV.

Schroeder said the first televised presidential debate between Richard Nixon and John F. Kennedy in 1960 set the tone, with representatives of both men insisting on a panel of journalists asking questions of the candidates as opposed to the two politicians interrogating each other. Then, as now, it was a way for campaigns to control the conversation and keep to their messages. The goal is to avoid unscripted moments that make White House aspirants look rude, caught off guard or unappealing in any other way.

“These candidates want to do everything they can to minimize risk and make everything as predictable and comfortable as it can be,” Schroeder said.

By contrast, the historian noted, voters appreciate unpredictability and want to see how potential presidents perform under pressure: “We want to see how the candidate reacts: Does the person get nervous? Do they lash out? Do they get defensive?”

Fortunately for voters, the past half century has seen experimentation with different formats, some of which have yielded those unplanned moments the political operatives fear.

For example, the 1992 general election between President George H.W. Bush, then-Arkansas Gov. Bill Clinton and businessman Ross Perot saw the debut of a town hall format allowing candidates to interact with voters. Clinton proposed the format, and it produced a particularly effective exchange for him, in which he appeared empathetic and relatable while talking to a woman about people who had been laid off in his state.

“He was very emotive and engaged with the audience,” Schroeder said.

In recent campaign cycles, the large number of presidential primary candidates has created logistical challenges for robust debate dialogue — or even in-depth questioning. Despite those constraints, colorful characters like businessman Herman Cain have grabbed headlines.

When the bombastic businessman takes the stage on Thursday, the historian thinks voters will have “no idea what’s going to happen and certainly no expectation that he’ll play by the rules. … It’s going to be good.”