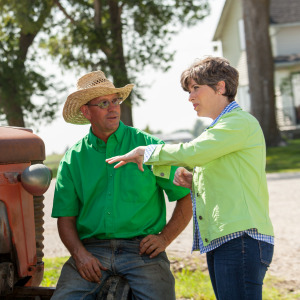 Why Joni Ernst will be the next US Senator from Iowa

I have written several times on why Joni Ernst had a very low probability of winning the US Senate race in Iowa. In May, I published a five-part series explaining a model that I had developed to help analyze the race. I took a second look at the model in August to determine if anything had shifted that would warrant a revision. At that point, I wrote that Bruce Braley was on track to win by about 3 percent.

Now, with Election Day two weeks away, I feel confident in stating that Joni Ernst will win.

I stressed in my analysis from May that the model was designed to gain an understanding of the fundamentals of the race. It was not a time series intended for frequent updates. Many other electoral models (538, WaPo, etc.) are continuously revised leading up to the election, but they also rely heavily on polling data and a number of factors intended to be apply broadly across all Senate races. I designed my model specifically for Iowa because, as I discussed in May, there are some complications comparing Iowa to other states—to include that there hasn’t been a competitive Senate contest in 30 years. I published far ahead of the election (and even before the Republican primary had concluded) because polling at that stage is inherently inaccurate, but a well-conceived model can help pinpoint what levers the campaigns have at their disposal and what factors are out of their control.

What has changed that makes me confident in Ernst’s win? The model made clear that Republicans faced two key challenges: money and ground game.

When I wrote in August, Republican strategists still believed that Ernst would be about $3 million behind Braley in total receipts by November. That is no longer the case. The two campaigns will be at parity by Election Day, with both spending somewhere between $11-$12 million. Ernst raised $6 million in the third quarter, a record in Iowa politics. This chart, published in May, shows how spending, when holding other variables constant, will influence turnout. By looking only at the expected total campaign spending, and weighing it as the original model did, Braley would come out ahead by less than 1 percent. But this would present an inaccurate understanding of the current dynamics in the campaign.

Braley had a high burn rate early in the race, so Ernst is going to substantially outspend him down the stretch, perhaps by upwards of $5 million. This is the type of issue that a model could never accurately account for because there is not enough data and it’s difficult to assess the impact of early spending; however, this is a key strategic strength for Ernst that will have an unknown impact on the final vote.

The strength of the Democratic turnout operation was another key factor favoring Braley in the model. The model selected historical turnout data as being a primary predictor of turnout. Democrats had proven for several cycles that they were more effective at turning out their voters. They open dozens of field offices across the state, and they try to get everyone to vote early. So I made the case that by improving their ground game, Republicans could significantly outperform the projections made by the model. That appears to be happening. It’s possible to see this in the early vote numbers.

Republicans now have their lowest historical return gap for early and absentee voting at this point in the electoral calendar. They are at a net deficit to Democrats of a little over 4,000. Republicans always substantially outperform Democrats for turnout on Election Day, so their success closing this spread portends well. And Republicans are continuing to improve. Last week, the GOP saw 6,302 more early voters than Democrats. The obvious question becomes how much cannibalization of the Election Day vote will the GOP suffer as a result of encouraging people to vote early, but someone who has voted will always be substantially more valuable than a likely voter.

We see some problematic trends for Braley in looking at polling—particularly as it relates to the early vote. Ernst has held a modest lead in nearly every recent poll. But getting beyond the topline numbers, polling of early voters indicates that Braley has not gained as much ground as he should have. In the past, Democrats have had success targeting no-party Iowans who they’ve identified as likely to support the Democrat. They have then been able to encourage them to vote early. That does not appear to be happening this year. Why do we know this? Democrats are going to lose the race for Governor by around 15 points. But in early voting Democrat Jack Hatch leads Republican incumbent Terry Branstad by 13 percent in the recent Quinnippiac poll. Braley only leads Ernst among early voters by 14 percent. If Democrats had implemented a strong microtargeting program to run up the score for Braley in early voting (while recognizing Hatch stands no chance), then we would see a larger lead for Braley. But the split among the small number of no-party voters who vote early appears to be breaking about evenly. There is a larger margin of error when studying these crosstabs than the topline numbers, but it would appear that either Democrats have poorly implemented their early voting program or Republicans have been more successful in targeting independents.

One final problem for Braley is the President. I discussed this issue in May. While Republican turnout will be unaffected by Obama’s approval numbers, I found a statistically significant effect indicating that Democratic turnout would be depressed by the President’s unpopularity. According to the most recent Des Moines Register/Bloomberg Politics poll, the President is 10 points underwater in Iowa. The data indicate a number of Democratic-leaning voters will choose to stay home because of a lack of enthusiasm for the President and his policies.

When I published my model earlier this year, my goal was to present the most-detailed picture possible of the direction this Senate race was heading. Because of the depth of data that I used at the time, I believe it offered a unique look at Iowa unlike any other publically-available model. Some of the reasoning I’ve offered in this analysis presents points that I believe few, if any, models could accurately weigh. Ernst’s strength is that, according to my model, she would be in a virtual dead heat with Braley if both parties were performing on-trend with prior cycles. That isn’t the case for the reasons I’ve outlined. Republicans have shown they have the strategic and tactical edge. The race will remain close, but Joni Ernst is going to win.