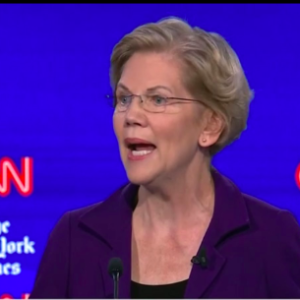 Journalists can keep asking, and her 2020 opponents can keep complaining, but Democratic frontrunner Sen. Elizabeth Warren is never going to admit that she’s proposing a middle-class tax increase to pay for Medicare For All.

And why should she? Democratic primary voters don’t want to hear it.

In the latest Democratic debate on CNN, moderator Mark Lacey of the New York Times went straight at the Massachusetts senator: “Will you raise taxes on the middle class to pay for [Medicare For All],” he asked, and demanded a “yes or no” answer.

Again and again throughout the debate, Warren simply refused to answer the question. She was called out for it by Mayor Pete Buttigieg (“a yes or no question that didn’t get a yes or no answer”).  She was insulted over it by Sen. Amy Klobuchar (“At least Bernie’s being honest about it that taxes are going up”). She was even mocked by former frontrunner Joe Biden, who told reporters after the debate, “Look, I’m not picking on Elizabeth Warren, but this is ridiculous.”

And still, Warren just smiles and evades. Which is, in fact, an answer in itself. If Warren had a way to pay the estimated $3 trillion a year socialized medicine program without raising taxes on the middle class, she would certainly say so. Instead, as the Associated Press puts it:  “Warren, candidate with the answers, dodges tax hike question.”

Thus far, her supporters are okay with that. In fact, some see her obvious evasions as “savvy” politics.

“Democratic voters want to beat Trump and appreciate Democratic politicians who are savvy,” said Adam Green of the Warren-supporting Progressive Change Campaign Committee in a Hill.TV interview.  “I don’t see why we would give the insurance companies rope to hang Democrats with a deceptive talking point.”

Like Green, many progressives reject the tax-hike question as inherently illegitimate, a talking point of Republicans or the healthcare industry. “Will you raise taxes on the middle class to pay for Medicare for all is a misleading question,” tweeted progressive activist and Amerian University professor Ibram X. Kendi. “I’m shocked journalists—JOURNALISTS–continue to ask this question in the #DemDebate.”

Most political pros see “how will you pay for your government program” as Journalism 101. But for Warren, it doesn’t matter either way. She’s not answering the question because she doesn’t have to. In fact, not answering fits in with her overall campaign strategy: Promise progressives everything they want today, and worry about the details later.

Shutting down the entire private healthcare system and its millions of jobs while simultaneously putting 320 million Americans on a single government system may be a brilliant idea or a bad one. But making it happen in four years is virtually impossible. Even if a Republican-controlled U.S. Senate agreed to pass the legislation (also extremely unlikely), the court challenges and bureaucratic obstacles would take years to resolve.

Progressives want it, Warren is promising it, but no serious observers believe it’s going to actually happen.

The same with Warren’s $189 billion a year wealth tax. Economists debate its value as an economic policy and dispute Warren’s revenue projections — why wouldn’t America’s wealthiest families simply move rather than pay billions in new taxes on their assets? But tax experts and attorneys already see a bigger problem: her wealth tax is almost certainly unconstitutional.

As Richard Epstein, the Laurence A. Tisch Professor of Law at New York University points out, Warren’s tax is an “unconstitutional wealth grab” that violates the prohibition of direct taxation. “Nothing whatsoever in the history of American law supports the unprecedented and punitive Warren wealth tax,” he writes.

“It is clearly a direct tax – period – which means that it has to satisfy the [Constitution’s] apportionment requirement,” tax expert Louis Vlahos of Farrel Fritz  said in Forbes.

But once again, her progressive base loves this assault on the “millionaires and billionaires,” so she promises to do it–with no mention of the decades of litigation that would certainly follow.

Environmentalists hate fracking, so Warren promises “I will ban fracking–everywhere” on day one of her presidency. Does the president have the power to do this? Of course not. She promises it, anyway.

Many Democratic primary voters hate guns, so Warren pledges gun control by “getting rid of the filibuster rule” in the U.S. Senate. The president isn’t even a member of that body–much less the officer in charge of it–but Warren says she’s going to make it so.

Warren’s campaign of progressive populism is similar in many ways to Donald Trump’s nationalist populism of 2016.  His pledge to “build a wall and make Mexico pay for it” was never a serious proposal. His three years of struggle to build even a small portion of border wall (and without funding from Mexico) reveals the distance between his promises and political reality.

But Trump’s rhetoric about a wall wasn’t a concrete policy plan as much as it was a form of campaign virtue signaling. It showed voters he shared their concerns about border security and illegal immigration and assured them that, whether the wall got built or not, he would make the issue his priority.

The same with Liz Warren. Few serious-minded people take her proposals seriously, but they believe she is sincere in her desire to move America toward socialism.  Maybe the best she can do is higher income taxes, a public option for health insurance and a fracking ban on federal lands. But her unrealistic rhetoric reveals an honest assessment of what her presidential priorities will be.

Once you understand that, asking Warren to admit that Medicare For All means a middle-class tax hike looks foolish. Why hurt her chances to become president over a theoretical tax increase for a proposal that’s wildly unrealistic in the first place?

When you’re promising people the moon, there’s no reason to ask them to pick up the tab.