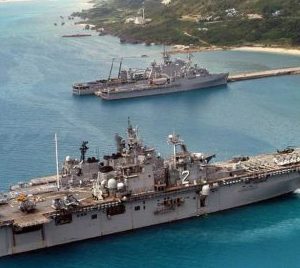 White Beach Port Facility, a US Navy base in Okinawa, Japan
[IS] Opinions

WASHINGTON ― We hear so much about North Korea’s secret bases that it’s sometimes easy to forget the ruckus over U.S. bases in the region. They may not be secret, but they can be controversial.

Take, for instance, the huge U.S. air and Marine bases on Okinawa. People over there, living in Japan’s southernmost island prefecture, historically the independent Ryukyu kingdom, cannot see why the United States, fully supported by the government of Prime Minister Shinzo Abe in Tokyo, does not scale down the American presence.

The answer in part is they’re the cutting edge of U.S. power in the Pacific. More than 50,000 U.S. troops are based in Japan, nearly twice as many as the 28,500 in South Korea, and U.S. and Japanese strategic planners see their presence as critical as long as North Korea remains a threat, refusing to give up its nukes and missiles, and China looms as a dominant regional power from the Indian Ocean to the South China Sea to the Yellow Sea.

A majority of the people of Okinawa clearly disagree. Okinawa’s newly elected governor, Yasuhiro “Denny” Tamaki, is in Washington explaining why he easily defeated a candidate supported by the central government in the recent election. The differences centered on the determination of the government to build a U.S. Marine air station off the northeastern coast near a major U.S. Marine base, Camp Schwab, and the equal determination of clearly a majority of the people of Okinawa to stop construction.

“We have good relations with Americans,” Tamaki told me after arriving here on a whirlwind round of visits to think tanks, political figures and officials. “The purpose of my visit is to convey the message to Americans to understand why the Okinawa people do not want the base at Henoko.”

That’s a message the Americans have been hearing for years in polite conversation as well as mass demonstrations that break out after some criminal offense, notably the rape of local women. In between such outbreaks, foes of the Henoko project are camped out day and night beyond the fences surrounding the base, making their views known while the government insists it’s needed to replace another Marine air station at Futenma, near the Okinawan capital of Naha.

Opposition to the Henoko project bears a certain similarity to the ruckus raised over construction of the Korean navy base on the southern coast of Jeju. The comparison, of course, is flawed. The base at Henoko, unlike that on Jeju, would be for aircraft, not ships, and it would be a U.S. base. Still, the emotions generated by what is seen as an intrusion on local society and culture reminds a visitor of the ongoing protest on Jeju.

Tamaki’s view is the Americans should build the air station elsewhere in Japan — anywhere but Okinawa. He does not really oppose the presence of Kadena Air Base, one of the largest U.S. Air Force bases anywhere, and he is not calling for the Marines to go home. Maybe, he said, they could relocate elsewhere on Okinawa, somewhere near Kadena. It’s not likely, however, that Japanese would welcome expansion of U.S. forces on the main Japanese islands. The U.S. Navy base at Yokosuka and the air base at Yokota, both fairly near Tokyo, are vital, but Japanese oppose having more U.S. bases on their soil.

For old people on Okinawa, the worst nightmare is the battle for Okinawa in the spring of 1945 when more than 200,000 died, more than half of them local citizens. U.S. forces won the battle at a cost of 12,520 American lives. The Okinawan people suffered far more. All told, 94,000 civilians were killed ― plus 22,228 soldiers from Okinawa drafted into in the Japanese army. An additional 65,908 troops from “mainland” Japan died in the battle, the worst in the Pacific War.

Such talk seems highly abstract, a distant apparition, but helps to explain Okinawan opposition to a base at Henoko ― and the need for serious peace, not just a “peace resolution,” on the Korean Peninsula. It also explains why the Americans and their Japanese ally, having been defeated on Okinawa, view the bases on Okinawa as so critical to their own defense and that of the region.