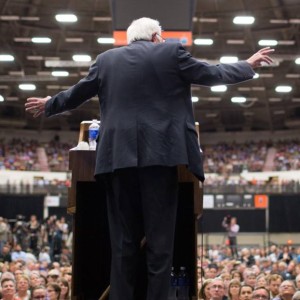 Why Sanders’ First Ad Feels Nothing Like Clinton’s Commercials

For the Democratic presidential candidates, the ad war is officially on.

Vermont Sen. Bernie Sanders unveiled his first television commercial on Sunday after a long period of Democratic frontrunner Hillary Clinton dominating the airwaves. Titled “Real Change,” Sanders’ 60-second spot focuses on his biography and progressive policy positions, evokes his grassroots support across the country, and promises voters “a future to believe in.” It’s a slogan similar to “change you can believe in,” which then-Sen. Barack Obama used to defeat Clinton in the 2008 Democratic presidential primary.

Sanders’ campaign is putting $2 million behind their new ad in the early primary states of Iowa and New Hampshire over the next 10 days, according to news reports.

NPR analyzed the message Sanders is sending with the new commercial. Facing a lack of support among black voters, he’s stressing his history of civil rights activism, which includes taking part in the 1963 March on Washington. He’s also touting his previous government experience as a mayor and congressman, his intense support from liberals, and the idea that he’s “an honest leader.” (Polling shows Clinton is not perceived as honest or trustworthy.)

Another takeaway from Sanders’ ad is how much it differs stylistically from Clinton’s commercials this year. The entire first half of the spot is biography — a career highlight reel aimed at introducing Sanders to voters who don’t know him. Clinton’s spots have much less of this. In fact, the one that does dwell of her resume tells viewers they “probably know” most it — a reasonable assumption, given that she’s one of the most famous women in the world.

The second half of Sanders’ commercial is mostly footage from one of his enormous rallies, many of which have drawn tens of thousands of supporters. Combined with a reference to his “over a million contributions,” it calls to mind the grassroots enthusiasm he’s attracted from many (primarily white) liberals, saying the senator is “building a movement with you.” The epic nature of the ad is underscored by dramatic music befitting a movie trailer, perhaps another effort to suggest something momentous about his bid.

Clinton has opted for a softer sell in her early commercials. Unburdened by the need to introduce herself, she’s focused instead on messaging meant to humanize her — she’s sometimes seen as impersonal and inauthentic — and show she’ll be a “fighter” for the American people. One spot revolves around her late mother’s life, depicting Dorothy Rodham as a woman who had a hard upbringing but nevertheless fought to give her children love, support, and opportunity. Another ad has to do with Clinton’s new granddaughter, and it shows the candidate saying, “You should not have to be the grandchild of a former president to know that you can make it in America.”

Lately Clinton has been using television to tell stories about the kind of people she’s pledging to champion. In four different ads, she introduces four different women: a nurse named Mindy, a kindergarten teacher named Sheryl, a young professional in financial programming named Alexis, and a business analyst named Sara. The first two are meant to demonstrate income inequality and the need for higher incomes. The other two are, respectively, a call to make college more affordable and pass equal pay laws for women. Clinton is present in these spots only through voiceover, save for one photo at the end, keeping the focus on “real people.”

There will be many more ads run in this primary race, to say nothing of the general election, but this weekend was a reminder of something significant: Sanders and Clinton each have different goals when they appear on your television screen.