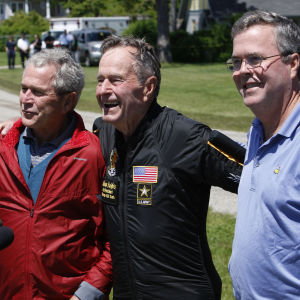 That’s according to Stephen Hess, senior fellow emeritus at the Brookings Institution and author of the forthcoming book America’s Political Dynasties.

In a recent interview with InsideSources, Hess noted that the Bushes would be the first family to produce three U.S. presidents, having already given the nation the administrations of George H.W. Bush (1989-1993) and George W. Bush (2001-2009).

The scholar also rejected the popular notion that former Democratic Secretary of State Hillary Clinton’s election would represent dynastic politics following her husband Bill Clinton’s presidential administration in the 1990s. “The Clintons become a dynasty when their granddaughter runs for the House of Representatives in 2040 and gets elected,” he said.

One irony of this difference, Hess argued, is that “the Clintons are not a dynasty but would like to be one, and the Bushes are a dynasty but keep denying that they are.” (Jeb has struggled with how to present himself in relation to his brother, whose presidency became quite unpopular.)

Hess also reminded InsideSources that the Bushes and the Clintons have quite different pedigrees. The first family comes from privilege, the second from modest means. “You could almost say that one came from the mountaintop and one came from the valley,” he said.

In researching his book, the scholar learned a great deal about the history of American dynasties, much of which is useful as we continue to watch prominent political families compete for power.

To begin with, many Americans see dynasties as “a brand name … like Ivory Soap.” According to Hess, “People tend to be initially inclined toward a name that has had luster and done work they like.”

What usually happens with these most famous names is that the child does inherit something that may be the equivalent of one step up on the political ladder. If your parent is in Congress and well thought of, you may have a real advantage for a seat in the state legislature or the city council, but what tends to happen is, after that first time around, you’re really on your own.

Hess cited the example of the Kennedys in Massachusetts, a family with one of the country’s strongest political brands. There’s no question they’ve been disproportionately represented in elected office over the years, but they’ve also had family members who couldn’t make it in politics.

“Look at Caroline Kennedy,” Hess said. “She tried to run for the Senate, more or less, and she just couldn’t make it. It wasn’t her stuff, and she wasn’t very good at it.”

Hess thinks the phenomenon of dynasties will endure in American politics, but he doesn’t think the nation has been disadvantaged by them. “Dynasties are born and dynasties die,” he said, at which point different families rise to prominence.

So for now, it’s the Bushes and (maybe soon) the Clintons. Within a few generations, who knows?