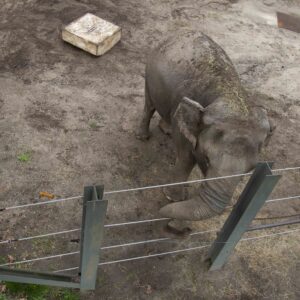 Happy the elephant wrapping her trunk around the fencing of her enclosure in the Bronx Zoo. Photo: © Gigi Glendinning
[IS] Opinions

Why the Court Should Free Happy

Should the law recognize an elephant’s right to be released from solitary confinement? The New York State Court of Appeals — the highest court in New York — will consider this question on May 18. At issue is an Asian elephant named Happy. But happy she is not.

Elephants are profoundly social animals, flourishing best in a hierarchically structured herd. Despite this, Happy has no contact with other elephants. She has spent the last 16 years in isolation at the Bronx Zoo, alternating between a small outdoor exhibit and a windowless, cement structure. Outdoors, she is confined to a mere 1.15-acre lot. Indoors, she is confined to a barred cage, just over twice the length of her body.

Under such conditions of severe deprivation, Happy cannot meet her physical or psychological needs. She is subject to chronic stress. Happy spends her days exhibiting “stereotypic” behaviors, fixed behaviors with no purpose. For humans, this involves repetitively nodding one’s head, rocking back and forth, or waving one’s hands. For Happy, this involves repetitively swinging her trunk, swaying back and forth, and lifting her feet.

The Nonhuman Rights Project has filed a writ of habeas corpus with the state of New York asking the court to recognize Happy’s right to be released from confinement. The proposal is to transfer her to an elephant sanctuary where she can roam, swim and — perhaps most important — enjoy the companionship of other elephants.

The problem is that under the law, everything is either a person or it is a thing. There’s no middle ground, and courts have until now assumed that all nonhuman animals are things. But Happy is clearly more like a person than she is like a thing.

In a 2020 court hearing in the case The Nonhuman Rights Project, Inc. v Breheny, Justice Alison Tuitt recognized this fact: “Happy is more than just a legal thing, or property. She is an intelligent, autonomous being who should be treated with respect and dignity, and who may be entitled to liberty.”

We agree, and we contend that Happy is entitled to liberty. For that reason, we — three philosophers — filed an amicus brief with the court in which we argue that Happy’s complex psychological capacities give her strong interests in liberty.

But this has absurd implications. It implies that humans who do not have the abilities required for them to be subject to moral requirements — such as infants and people with profound cognitive disabilities — lack rights.

This view offends against norms of human equality, and violates our core belief that all human beings have these rights for fundamentally the same reason. It implies that most humans have rights because they have moral capacities, but other humans have rights only because they are related to most humans in a certain way. It makes the possession of rights turn on group membership, not the characteristics of the individual as they are in themselves.

We should be suspicious of such views. Humans have a long history of associating rights with group membership (e.g., racism, sexism), and time has invariably proven these views to be mistaken.

A better explanation of why every human being has a right to bodily liberty is that they have strong interests that this right protects. Since Happy has the same strong interests, the court should recognize Happy’s right to be freed from solitary confinement.

Gary Comstock is Alumni Distinguished Undergraduate Professor of Philosophy at North Carolina State University. He wrote this for InsideSources.com.

Adam Lerner is Lecturer in Philosophy at Princeton University. He wrote this for InsideSources.com.

Peter Singer is the Ira W. DeCamp Professor of Bioethics at Princeton University. He wrote this for InsideSources.com.

Point: Gerrymandering Is Inevitable in a Democracy Read More