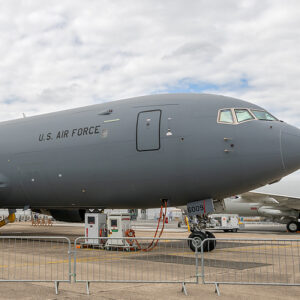 Americans love a good rivalry. Magic Johnson versus Larry Bird, Red Sox versus Yankees, or even Pepsi against Coke. Yet, a big one when it comes to sucking up taxpayer money for defense contracts is the Boeing and Airbus slugfest. And while it may not grab the same headlines as Batman vs. Superman, choosing the right side of this slugfest is important to our national defense, taxpayers’ pockets, and America’s combat readiness.

In modern warfare, in-flight refueling is critical to the U.S. Air Force’s mission “To fly, fight, and win…airpower anytime, anywhere.” The aging KC-135s–built by Boeing and the workhorse of USAF power – first started flowing off assembly lines in the 1950s. Despite their longevity and stellar record, they need to be replaced.

The backstory of the bidding wars for new tankers between America’s Boeing and European Airbus is complicated and messy. In the end, Boeing won the contract in 2011. They soon introduced the KC-46 Pegasus. It’s had a few problems—problems which Boeing spent $5 billion of its own money to fix, which surely is why the Air Force has confidence in the aircraft. So much confidence, they continue to order more. The KC-46 is already certified to air-refuel most of our nation’s aerial defense fleet.

“While we work to rectify some discrepancies, we stand behind the KC-46 and believe it will be a great refueling capability for decades to come,” said Lt. Gen. David Nahom to National Defense Magazine.

The main problem that persists is with the remote vision system used to guide the boom for air-refueling from the cockpit. This occurs only when the sun is low in the sky. Earlier air refuelers were done manually by the boom operator in the back of the aircraft. Boeing says the issue will be fully fixed by 2023.

One would think this good news about legacy aircraft built by a legacy U.S. company would put the odds of a new, long-term contract squarely on Boeing’s side. Instead, French company Airbus has made some savvy moves to secure political support, most importantly by partnering with Lockheed Martin to build its own tankers in Alabama. Yet, it’s becoming more and more evident that the politics are not aligned with Air Force preferences.

Airbus’ Lockheed Martin partnership has caused Members of Alabama’s congressional delegation to go all-in for Airbus. Airbus’ planes, a modified A-330, are slated to be assembled in Mobile, although the aircraft will require many European parts and systems.

The A-330 is bigger than its Boeing competitor–in fact, it’s too big. The wingspan on the A-330 refueler is 198 ft. compared to 156 ft. for Boeing. The wingspan is still bigger than the KC-10 air refuelers– nicknamed “Big Sexy”– introduced in the early 1980s because of cargo needs. The Airbus aircraft takes up twice as much space on the ground at a time when flight line space is a premium and airfields around the globe are strategically vital.

The A-330s size makes it a gas guzzler in the air, too. In Forbes, Loren Thompson, CEO of the Lexington Institute, points out that the Airbus tanker burns 1,000 more gallons of fuel per hour than its Boeing counterpart. “Multiply the number of hours flown by the price of jet fuel, and operating costs over a 30-year-service life becomes much higher than with KC-46,” writes Thompson.

Given that the KC-46 is already a critical part of the Air Force mission, adding a redundant aircraft to the fleet means greater costs for maintenance and training. Taxpayers, troops, and America’s national defense will be better served by a cheaper aircraft that is just a new version of the KC-135–an aircraft that is still operational nearly 70 years after it was first rolled out of a factory. Reliable longevity is another reason to support military equipment, and in this case, Boeing wins hands down.

From the World War II-era B-17 Flying Fortress to the new and advanced F-15EX, Boeing’s legacy of contributing to America’s national defense is nearly unmatched. It’s time to remove politics from the tanker fight and look squarely at what’s best for the U.S.

Ray Nothstine is opinions editor at the Carolina Journal in Raleigh, North Carolina. He wrote this for InsideSources.com.