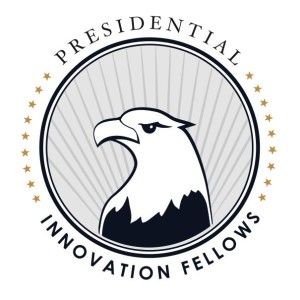 The official logo of the Obama administration’s Presidential Innovation Fellows program is a cartoon of a bald eagle. It’s drawn from the chest up, encased in a circle and surrounded by strips of stars.

Inspired by the eagle depicted in the presidential seal, the art is the brainchild of a Rhode Island web designer named Danny Chapman, who I first met while working in Providence a few years ago.

Chapman was part of the inaugural class of Innovation Fellows here in Washington — one of the “entrepreneurs, executives, technologists, designers and other innovators” from the private sector who come to the nation’s capital for a tour of duty in the federal government.

For half a year, beginning in 2012, he and his colleagues were tasked with making government “smarter, more innovative, more transparent, and more responsive to the American people.” Since then, three additional classes of fellows have cycled through the District, participating in a program that now lasts a full 12 months.

I talked to Chapman on Tuesday — a day after President Obama signed an executive order making the program a permanent institution — and the designer credited the effort with helping make technological advancement part of government’s DNA.

“I think the biggest change that’s come out of it has been cultural,” he said, and stressed the need to make citizen interaction with government as convenient as the best online banking.

On Monday, the president also touted the program’s concrete achievements. He cited specific ways Chapman and his colleagues made a difference, thanking them for “some remarkable results”:

Thanks to their efforts, veterans have enhanced access to the care and benefits they’ve earned. Families have greater access to their own electronic medical records. Police departments are making their data searchable online. More of our students gain access to high-speed internet every single day.

Chapman told me he was glad to be a fellow because he’s “an impact junkie,” and he saw government as a means of affecting a huge number of lives through technology: “If you work in Silicon Valley, you’re really lucky to work on a project that touches maybe 100,000 people. Working in government, you can reach hundreds of thousands of people really quickly.”

Which isn’t to say it’s easy. Chapman said he found a lot of support in Washington, but got as frustrated as anyone with red tape, right down to the regulations on how government purchases technology services: “You look at these procurement rules, and they’re certainly not written for procuring tech in 2015.”

I was curious how tech experts are evaluating the Obama administration, so I asked Stephen Ezell of the Information Technology and Innovation Foundation. He has his own wish list when it comes to government reform, advocating for a national foundation devoted to technological innovation as well as unique innovation strategies for each federal department.

Nevertheless, Ezell told me he and his colleagues are enthusiastic about the fellows program and applaud the president for making it permanent.

“I think it’s been a great and successful program that has brought considerable innovation and competency and talent into the White House and the broader federal government,” he said in an interview Tuesday.

Still, no government is without its moments of incompetency.

Any assessment of the Obama administration and technology has to include the healthcare.gov debacle, and the president now freely acknowledges the website’s botched rollout as a blemish on his record. Speaking to Fast Company in June, he described the “well-­documented disaster” as a kind of wake-up call for the White House in terms of technology upgrades that were neglected early in his presidency.

“With all the crises we were dealing with — the economy collapsing, the auto industry on the verge of collapse, winding down wars — this did not get the kind of laser-focused attention,” Obama said.

With the fellows program, the president hopes to keep fostering what he calls “a culture of public service among our innovators and tech entrepreneurs, so that we can keep building a government that’s as modern and innovative — and as engaging — as our incredible tech sector is.”

The administration is also helping program alumni keep in touch. Chapman just got back from a White House reunion, and he reports that many of his former colleagues still do government technology work. He’s enjoying his time at the startup Ad Hoc LLC, where he works with some of the people who finally got healthcare.gov up and running.

Chapman also likes that the fellows program still uses his eagle logo — a little piece of art beckoning future innovators to follow in his footsteps.