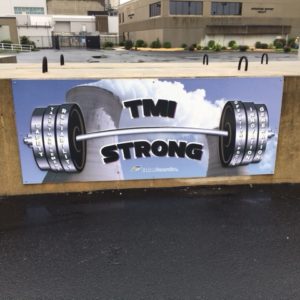 Why Three Mile Island’s Closure Seems All But Certain

Decades before texters started complaining about “too much information,” the people of east-central Pennsylvania had their own TMI:

It’s been a key part of the local economy and communities since it opened in the 1970s. Driving through Dauphin County, PA, outside of Harrisburg, the nuclear power plant’s iconic cooling towers appear on signs and billboards. A local microbrewery even produces a “TM-IPA.” All this is soon to come to an end. Three Mile Island’s operating days are numbered, and it is starting to seem like there is little that the surrounding area can do other than brace for the impact.

“Economically devastated,” is how Steve Letavic, township manager of Londonberry Township, describes the impact of the planned closure. The power plant itself pays $1 million annually in real estate taxes, in addition to supporting local charities, including the fire department and events to promote science in schools. Its employees live in the area, supporting local businesses and. After more than 40 years of operation, TMI really is part of the community. If it leaves, no other employer is likely to step in to fill the void.

“It’s not like a warehouse or factory can come in and replace these jobs,” he says. “These are high-paying tech jobs and if they leave, they won’t come back. Look what happened when the Vermont Yankee Plant closed.”

(The closure of the Vermont Yankee nuclear plant in 2014 was devastating for the economies of the towns nearby, which are still struggling to get back on their feet.)

Exelon has promised that current TMI employees will receive positions elsewhere in the company. That offer does not apply to most of the union contractors brought in on a bi-annual basis to help with plant refueling, nor to the area restaurants and businesses that cater to the TMI staff.

“Our livelihoods are dependent on this maintenance work,” says Martin Williams, business manager of the Boilermakers Local 13. Boilermakers are responsible for maintaining the pressure vessels and heat exchanges that are some of the main components of the power plant. If TMI closes, their jobs would also be lost.

Sadly, there seems to be little that can be done to stop it. Pennsylvania is home to not only TMI and its two sister nuclear reactors, but also to shale fields. Natural gas producers have lobbied against legislative attempts to protect the plant, which they see a a competitor. Even though a nuclear energy caucus was formed to address the issue in the state legislature, thus far, no bills have been introduced to help the plant and the legislative session has nearly ended.

“There are number of interests that have been waging a multi-million dollar campaign against any sort of consideration of legislation for the better part of two years now and no piece of legislation has been introduced in two years,” says David Fein, senior vice president of state governmental and regulatory affairs for Exelon. “Now, we’re hopeful that there will be a strong enough coalition of supporters who don’t want to see these bad things happen in Pennsylvania, if they care about the environment and the air that we breathe they will join us in supporting something.”

Meanwhile, time is running out.

The plant needs to be refueled every two years. Refueling is a technically complex procedure where a third of the radioactive fuel rods that form the reactor’s core are replaced and the remaining rods moved around. The process brings in an additional 1,200-1,400 contractors and requires a full plant outage. Generally, these outages are scheduled for spring and fall, when demand is lower. Planning for the outage and refueling begins about a year in advance. TMI was last refueled in September, 2017, meaning that it would be due for a refueling in 2019 and planning should be beginning now.

Instead, a Decommission Transition Organization team has already begun working on a plan to safely shut the plant down in October 2019. While the plant continues to operate, it is slowly backing itself into a corner. Not only is the plant running into the decision to either prepare for shutdown or to prepare for refueling, nuclear plants cannot be temporarily shuttered and then reopened.

When a nuclear plant shuts down, it is required to submit written certification of “permanent cessation of operations” to the Nuclear Regulatory Council within 30 days. This document is irrevocable. Once it is submitted, the process of disassembling the reactor will begin.

Unless something changes, TMI would submit this paperwork in the fall of 2019. In the meantime, coalitions like Clean Jobs for Pennsylvania are organizing on the ground in the state to push for legislation that could help the plant stay open. The state’s Nuclear Energy Caucus hopes to present legislation that would save the plant early next year, but is taking the time to “make sure we get this right,” as one member put it.

EDIT: This piece was edited to include additional information about legislative efforts to keep the plant operating.