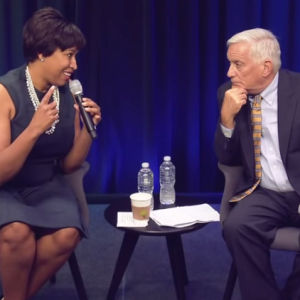 Why Washington Is Counting On Tech Innovators

D.C. Mayor Muriel Bowser has had plenty of professional accomplishments in her decade of public service, but learning to code isn’t one of them.

The Democrat owns up to this freely, even among the tech-savvy denizens of Google’s D.C. headquarters, where she appeared last Monday to help launch the Aspen Institute’s new Center for Urban Innovation.

For the crowd gathered there, Bowser’s personal skill set was irrelevant; the technology sector is booming in her city, which was recently ranked as the nation’s best for women in the industry. The designation was particularly pleasing to a mayor who celebrates the fact that she leads Washington along with a female police chief and a female schools chancellor.

“The girls are running this city now,” she told the Google audience, drawing laughter and cheers. “We want to make sure we’re attracting women in tech.”

In fact, Bowser’s ambitions for Washington’s tech industry extend far beyond opportunities for women. She spent much of the past month unveiling initiatives to connect all kinds of D.C. residents and small businesses to the growing sector. Among them is a program with the start-up hub 1776, which will target the city’s poorest communities east of the Anacostia River that don’t often benefit from downtown economic growth.

“Mayor Bowser definitely puts a priority on inclusion and making sure that the tech economy is reaching everyone,” 1776 cofounder Donna Harris told InsideSources. “There are a lot of barriers. It’s not just transportation. So many of the [tech industry] events happen in the evenings. What are you going to do if you have children or a job?”

Notwithstanding these significant challenges, the tech sector is widely seen as a valuable asset for Washington, especially as the city seeks to diversify its economy in an era of government cutbacks. Many observers attribute D.C.’s recent prosperity to the increased federal spending of the 2000s, and recent cuts have exacerbated the need to build up other local industries. To that end, Bowser’s predecessor, Mayor Vincent Gray, set a goal of growing the largest tech sector on the east coast. By the end of last year, Washington’s NPR affiliate was asking: “Is D.C. Transforming From A Government Town Into A Tech Hub?”

But questions remain about just how much this industry can grow in Washington, and to what extent it can actually help solve the economic diversification issue.

“Rather than becoming a second Silicon Valley, the District is shaping up as more of a Silicon Hill, with a tech scene built up around the activity of the federal government,” journalist Aaron Wiener wrote in the Washington City Paper last year. “And while this growing sector holds economic promise for the city, it also risks pushing D.C. deeper into the rut.”

Harris acknowledges that federal spending has benefited the industry, but she said, “I’m also seeing a significant number of companies that aren’t tackling issues directly related to government.” For example, she noted that the transportation app RideScout launched in D.C., where ride-hailing companies such as Uber and Lyft have thrived.

Moving forward, Harris said one major goal will be to keep generating good buzz about what’s happening in Washington: “People have to perceive that there’s a strong ecosystem. They have to see companies growing and having success.”

Bowser has more immediate priorities, including finding ways for tech to improve the fundamental functions of government.

“How do we stop having people wait in line for basic benefits?” she asked the crowd at Google. “If we can figure out how to make it easier to get a ride in our city using technology … we can figure out how to connect people to food stamp programs and [Temporary Assistance for Needy Families] programs, but more importantly, job training programs that will help them get on a pathway to the middle class.”