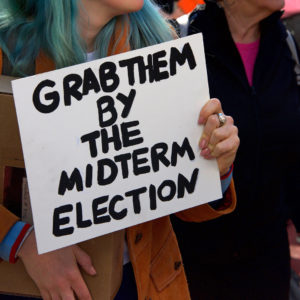 San Francisco, CA - January 20, 2018: Unidentified participants in the Women's March. Designed to engage and empower all people to support women's rights, and to encourage vote in midterm elections.
News

What if they held an election and everybody came…but it didn’t make any difference, anyway?

While politician after politician embrace the mantra that the 2018 midterms are (to coin a phrase) “the most important election in our lifetime,” the available data point to something else. Call them the Macbeth Midterms: “Sound and fury, signifying nothing.”

OK, maybe not “nothing.” But not very much.

“Nothing I see on the horizon is showing there will be any meaningful change from this election,” New England College political science professor Wayne Lesperance tells InsideSources.  “The status quo is going to be affirmed.”

No, Professor Lesperance isn’t predicting Republicans will hold the House. Far from it. He believes it’s all but certain that Nancy Pelosi will be Speaker once again. But the GOP will likely add to its majority in the US Senate, giving both sides something to brag about and, most significant, the bases of both parties the ability to declare a victory, reinforcing their strategy of “fight, fight, fight!”

Nate Silver at FiveThirtyEight gives Democrats an 86 percent chance go taking the House but just an 18 percent shot at control of the Senate. According to Democratic political strategist Bob Shrum, now director of the Center for the Political Future at the University of Southern California, their latest polling finds a Democratic advantage of around 17 percent in voter preference. But because those liberal voters tend to be packed together around major urban centers, the net number of Congressional seats they pick up may not be as impressive as their poll numbers.

At the University of Virginia, for example, Larry Sabato’s “Crystal Ball” team finds “212 seats rated Safe, Likely, or Leaning Democratic, 202 Safe, Likely, or Leaning Republican, and 21 Toss-ups. Democrats would need to win everything at least leaning to them and six of the remaining Toss-ups to win a majority. As we assess the Toss-ups right now, we’d probably pick half or more to go Republican, and some of our Leans Democratic rated races may very well be too bullishly rated for Democrats.”

Net result: A narrow Democratic House majority. Hardly the political earthquakes of 1994 or 2010.

Not everyone agrees. Shrum believes a 30 or 40 seat Democratic House wave is on its way.

“I don’t think it’s just a lot of noise. I think something is really going on out there,” Shrum tells InsideSources. “About 20 percent of the respondents in the USC/LA Times poll are what we call ‘hold your nose’ voters. They don’t like the Trump or Pelosi agendas. In 2016, those people broke for Trump. In the latest poll they’re breaking for Democrats in the House 59-34 percent.”

And if Shrum is right….so what?  On Wednesday, November 7th, the House is controlled by Democrats, the Senate is slightly more Republican, Trump is still Trump, and America is just as partisan and divided as it was before.  We remain the fairly evenly split, 50-50 nation we’ve been since at least the 2000 Bush v. Gore election.

“I think that’s right,” political analyst Michael Barone tells InsideSources. “We’ve had divided government two-thirds of the time over the last half-century. Two of the three previous presidents saw their victories followed immediately by their own parties losing big in their first midterms. It would likely have happened to George W. Bush, too, if not for the effects of 9/11.”

Which is why this may be a ‘MacBeth Midterm:’ Rather than a major shift in political direction, a clear win for one party or the other that resolves the national debate and sets our politics on a new course (think Reagan in ’80 or Kennedy in ’60), this election is instead going to involve massive turnout and record-setting levels of campaign spending and shouting mobs and protests and politicians chased out of restaurants all leading up to….more of the same.

Consider the Clinton example.  When his party lost control of Congress, President Clinton abandoned his leftward push and famously declared “The era of big government is over.”  The Clinton presidency after the GOP took control of Congress was very different from the first two years.

Does anyone expect a similar shift in the Trump presidency? The more likely outcome is for Trump to double-down on his “us-vs-them” warfare, but with the added benefit of Speaker Pelosi as his new foil.

“For President Trump, a Democratic House majority will be great in some ways—the attacks, the hearings, the subpoenas,” Lesperance says. “He’ll be able to tell his supporters ‘They’re coming after me just like I told you they would. It’s vendetta time!’ It really does set him up for 2020.”

Shrum believes the Democrats will be smarter than that. “I believe wise heads will prevail, including Rep. Pelosi’s,  there will be no rush to impeachment. Democrats will wait for the Mueller report and see where it leads.”

“Trump is going to have to show he can make deals with the Democrats,” Shrum says, and Democrats are going to be ready to deal. “I think they’re also going to attempt to do a real middle-class tax cut, probably paid for by rolling back some of the tax benefits that went to the top one percent,” and he sees an infrastructure package potentially on the table, too.

That’s one scenario. The other is that the newly-energized progressives like Rep. Alexandria Ocasio-Cortez and Rep Ayanna Pressley show up in Congress ready to wage war against a president they’ve preached is both prejudiced and impeachable. Meanwhile, would-be presidential candidates in the U.S. Senate like Cory Booker, Kirsten Gillibrand and Kamala Harris will play to their party’s progressive base in an attempt to power up their 2020 campaigns.  All of which will give President Trump precisely the political opponent he wants for his re-election campaign.

The first scenario is based on hope. The latter is based on experience. Place your bets accordingly.