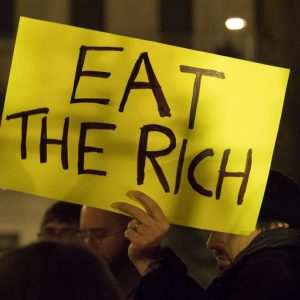 Will a ‘COVID-19 Tax’ on America’s Super Rich Help or Hurt?

Progressives call it “social justice.” Opponents call it “looting.” But what would the practical economic effects be of a “COVID-19 tax” on America’s super rich?

The bill calls for a one-time tax on billionaires that supporters say would cost Elon Musk (of Tesla and Space-X fame) $27.5 billion and Amazon’s Jeff Bezos $42.8 billion. It would assess them and other billionaires “a one-time 60 percent tax on wealth gains made by billionaires between March 18, 2020, and January 1, 2021,” according to the bill’s sponsors.

According to Markey and Sanders, the act would affect the 467 billionaires who have accumulated $731 billion since March 18 as the economy went into lockdown.

“As more than 160,000 Americans have lost their lives and millions more have lost their jobs, it is unconscionable that the super-wealthy are getting even richer in the midst of this crisis,” Markey said.

Sanders says the bill “would impose an emergency tax on the increase in wealth of billionaires during the COVID–19 pandemic to pay for all of the out-of-pocket healthcare expenses of the uninsured and under-insured, including prescription drugs.”

“It will tax the obscene wealth gains billionaires have made during this extraordinary crisis to guarantee healthcare as a right to all for an entire year,” he added.

The measure requires “billionaires to pay their fair share,” she said. “It will help support workers and families dealing with job losses, food insecurity, housing instability and health care. Not only is this a common-sense proposal, but it’s a moral one, and Congress should be doing all we can to assist Americans struggling right now,” she says.

Critics of this progressive approach make their own moral argument: It’s the private sector, and not redistribution, that’s kept Americans fed during the pandemic.

They point out many of the companies who’ve prospered during the pandemic have done so by providing needed services to isolated, and sometimes desperate, people.

In May, e-commerce sales nearly doubled as many Americans were ordered to stay home or chose to do so in the name of their health. And while Amazon is a dominant player in that sector, it is hardly alone in seeing a spike in demand. Walmart and Target both reported increases in online sales. Videogame retailer GameStop saw its online sales rise more than 500 percent during the COVID-19 lockdown.

Arthur Laffer, an economic advisor to President Trump who also worked for President Reagan, told InsideSources the measure is “counterproductive and ridiculous.” It amounts to a form of public looting, he says.

“The difference between looting and public looting is with the looting you give your money to other people. These people offering these measures are also looters, except they just happen to be elected.”

Taxes targeting one group, he adds, discourage the accumulation of capital, which hurts the productivity of the economy.

At least one northeastern Democrat appears to agree. New York Gov. Andrew Cuomo has been publicly begging wealthy New Yorkers to return to the Big Apple and help rescue the economy.

“I literally talk to people all day long who are now in their Hamptons house who also lived here, or in their Hudson Valley house, or in their Connecticut weekend house and I say, ‘You got to come back!’” Cuomo said last week. “‘We’ll go to dinner! I’ll buy you a drink! Come over, I’ll cook!’”

Cuomo made these comments after resisting calls from leaders of the Democrat-controlled state legislature that he support another new super wealth tax, a popular tax in the Empire State in recent years.

Besides, says Bay State money manager Hunter Lewis of Cambridge Associates, wealth taxes don’t work. “The entire economy depends on the quality and quantity of investments by the rich,” Lewis writes in his book, “One Hundred Economic Laws.”

Lewis, who runs his own money global investment firm, warns of the unintended effects of taxes targeting the top 1 percent. They won’t promote economic growth or job creation among those hurt most by the COVID-19 economy.

Instead, wealthy Americans will start selling assets to pay new taxes, he writes. That could lead to a market collapse. “Because markets anticipate,” Lewis writes, “the collapse would actually precede the tax due date, thereby eliminating the very wealth the government expects to tax.”

That’s the wrong approach entirely, says Laffer: “We want billionaires, they’re good for the economy. We should want more of them.”