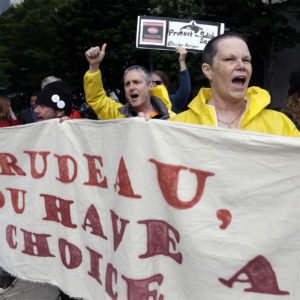 Will a Lack of Political Will End the Trans Mountain Pipeline?

What does it take to get a pipeline built? Increasingly, it seems that the answer is as much political willpower as it is money. In the U.S., construction of new natural gas and oil pipelines routinely raises an uproar from environmentalists who attempt to delay building progress as long as possible. Sometimes, as in the case of the Keystone XL pipeline, this effectively kills the project, as permitting costs soar before the company is able to rally enough political support to start construction, let alone move towards completion. North of the border, Kinder Morgan and the Canadian government are in the throes of this process, struggling to get the Trans Mountain Pipeline expansion project off the ground, even with billions of dollars of support from the Canadian government.

The Trans Mountain Pipeline runs from Alberta to British Columbia, bringing oil sands to the Pacific Coast, where it is then shipped overseas, generally to China. The proposed expansion would increase capacity on the line. Last week, the Canadian government took over the project after Kinder Morgan said that market uncertainty made it “too risky” to complete the project. In response, the Canadian government stepped in to purchase the pipeline for $3.5 USD.

“The project became too risky for a commercial entity to go forward with it; that’s what Kinder Morgan told us,” Canadian Prime Minister Justin Trudeau said during an interview with Bloomberg. “We are going to ensure that it gets built so that we can get our resources to new markets.”

Trudeau stressed that the government was not intending to stay in the pipeline business long and expressed confidence both that a buyer could be found once the project was completed, and that federal ownership would remove many of the challenges to the pipeline’s completion.

Protesters, however, saw the move as a betrayal. On Monday, various native rights and pro-environmental groups declared a “Day of Action,” leading more than 75 protests across Canada. They specifically targeted the homes and offices of liberal MPs, who they hope may step in to stop the deal.

“People feel betrayed by the Trudeau government’s decision to use billions of taxpayers’ dollars and ignore Indigenous rights, community safety and the climate,” said Tzeporah Berman, who spoke at Tuesday’s rally in Vancouver. “We stopped Kinder Morgan and its investors, we will stop this buyout as well.”

Twenty-one chapters of the Council of Canadians, one of the country’s leading environmental action groups, held protests. The group rejects the pipeline both from environmental concerns and worries about government overreach.

The pipeline has been a divisive issue in Canada, with clashes not only between environmentalists and the government, but also between the federal and provincial governments. British Columbia, where the pipeline would terminate, has been resisting the project, while Alberta, where the oil is produced, is pushing to open additional export markets. It is currently estimated that Canadian oil producers forego C$15 billion in export revenue each year.

Meanwhile, continuing an argument used at the NoDAPL protests in Standing Rock, protesters argue that the pipeline tramples on tribal sovereignty as well as threatening the environment. On Tuesday, Trudeau met with members of the Indigenous Advisory and Monitoring Committee in British Columbia, a meeting that brought together 13 indigenous and six federal representatives. Protesters, including tribe members, gathered outside of the meeting to voice their protest. The deal has divided tribe members; although one committee member posted on Twitter about his strong support of the deal, other tribe members expressed their dissatisfaction with Trudeau’s leadership.

The proposal has also earned criticism from American politicians. Washington State Governor Jay Inslee called out Trudeau for supporting the pipeline, which he deemed a huge step backwards in the fight against climate change.

“This project runs counter to everything our state is doing to fight climate change, protect our endangered southern resident killer whales and protect communities from the risks associated with increased fossil-fuel transportation − by rail and by sea,” Inslee wrote.

Admittedly, Inslee has few enforcement mechanisms to resist the project. Canadian oil producers largely laughed at his remarks, pointing out that the price of carbon was already higher in Canada than had been proposed in Washington state.

Regardless of the future of the project going forward, one party in the deal has already come out better than expected. Kinder Morgan, a U.S.-based company, structured its pipeline proposal to minimize the financial risks of walking away from a deal. Unlike rival companies Enbridge and TransCanada, Kinder Morgan made sure that the terms of its deals with lenders and oil producers minimized the cost of cancellation. About 80 percent of the capital costs were guaranteed by companies that had signed shipment deals with the project. This gave the company extra leverage in negotiations with the Trudeau government last month, as walking away from the project was a much more likely possibility.

With the backing of the Canadian government, the money to complete the Trans Mountain Pipeline is there, but do they have the political stomach for it?