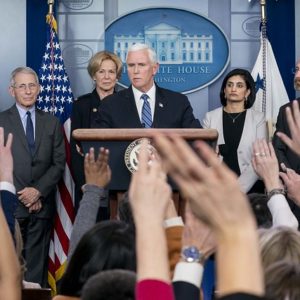 Will Coronavirus Jolt Us Into a New Reality?

A dark cloud is passing across the nation and the world. When it passes, how will we have changed? How will we react after this national jolt?

In Britain after World War II, there was a period, at the end of the 1940s and into the 1950s, of idealism and common purpose. It ushered in as its prime minister not Winston Churchill, who had won the war, but milquetoast Clement Atlee. One lasting and revered reform of the Atlee government was the introduction of the National Health Service.

In America there was a new confidence, aided by legislation like the GI Bill, which led to the expansion and general contentment of the 1950s.

The tumultuous, jolting 1960s left us changed. Sex was considered an entitlement, the environment an ethic, civil rights a moral obligation and women gained nominal equality. Reverence for institutions was out, and all expertise was suspect. “Some things are too important to be left to the experts,” said the young people who had hated the Vietnam War.

In the 1970s, the revolutionaries of the 1960s were gradually absorbed into the bourgeoisie. Mostly, they seemed slightly embarrassed about who they had been and what they had done.

The killing of Martin Luther King Jr. in 1968 and the riots that followed, engulfing major cities from Baltimore to Los Angeles, looked momentarily like a national wake-up call that would unite the nation. Instead, we got a measurable jolt with white flight to the suburbs.

The energy crisis of 1973, which remained with us for two decades, also jolted the American body politic. Here was an external force that could not be internalized: The oil we needed could not be produced domestically. We were at the mercy of foreign powers, like Saudi Arabia and Iran. All the raw materials we had needed up that point appeared to be domestic. Now we had joined the world community in a way frightening to us. Fortress America was breached.

We thought that crisis would change the way we lived. Amitai Etzioni, then a professor at Columbia, and a Wall Street Journal columnist, predicted that we would all have less of everything — and be just as happy, if not happier. We would all wear jeans as daily dress, ride bicycles and drive very small cars. Detroit-made some small cars — and they were awful. But the move to smaller cars — no more land yachts with acres of chrome and fins — can be seen on the streets today.

Something seminal had jolted us and spurred our engineers to do better.

Another jolt was 9/11: An attack of wartime proportions. It fed a new nationalism, an inward turn, with a profound distrust, even dislike for people of different cultures who want to come here from elsewhere. It stirred a somnolent patriotism.

Now, in the time of COVID-19, we are enduring another great national jolt that will have consequences in the decades ahead.

After this pandemic, it is a fair guess, we will be more inclined to believe the experts and to value medical science the same way we have worshiped computer technology. In addition, stock markets might come to be eclipsed by a more representative measure of the national well-being.

Particularly, the indifference we have felt to predictions of existential calamity may be taken way more seriously than before COVID-19. Predictions of disasters that did not happen, like the Y2K computer alarm, have lulled us into thinking bad things will not really happen: A fix would be found.

Now we are struggling with an assault that will be seminal in its impact, personally frightening and economically devastating. We cannot buy or fight our way out of the COVID-19 pandemic. An immunization is a year and half away. Will it work?

I would put at the top our list of existential threats climate change and cyberattack. Sea levels are rising, and coastal cities are under pressure. That will get worse.

The security of the electric grid also is under a daily attack. Experts are, and have been, warning of the possibility of parts of the country being blacked out for long periods. A new bipartisan congressional cyberattack threat report has just been released.

Going forward, we dare not think it cannot happen here because it can. It is happening here now.