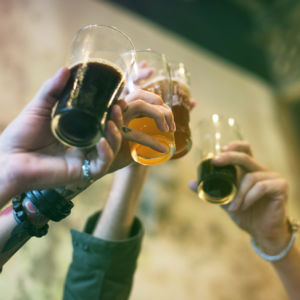 Can tax cuts kill? According to a number of left-leaning think tanks and publications, the answer is yes, at least with respect to the Senate’s proposed tax reform bill. At the center of the issue is a 16 percent reduction in Federal alcohol excise taxes. The text of the Senate’s bill calls for taxes on beer, wine, and liquor to be reduced in a series of cuts that would end in 2019. These alcohol tax cuts would reduce federal taxes on beer from $7 to $3.50 per barrel on the first 60,000 barrels, and from $18 to $16 per barrel on the next six million barrels. Supporters hope that these changes will help small businesses and fuel job growth, but critics say that lowering the taxes may lead to more alcohol-related deaths.

Much of the concern is based off a study by Brookings Institution Senior Fellow Adam Looney, who examined the alcohol tax changes in a recent report.

Looney’s analysis is based off projections of the impact of past tax increases, particularly a study by the American Journal of Preventive Medicine, which found that 1991’s increase in the federal alcohol tax decreased alcohol-related deaths by 4.5 percent, or 6,480 deaths in 1991.

The difficulty in evaluating claims like these comes from the impossibility of running a control group. Some parallels, however, can be drawn from varying state experiences. Illinois provides a particularly good example, since the state passed alcohol excise tax increases in 1999 and 2009 that more than doubled the alcohol tax rate.

Research by Robert McClelland and John Iselin of the Urban-Brookings Tax Policy Center found that the sudden increases did little over the long term to lower the rates of drunk driving fatalities. They found that in 2008, before the tax hike went into effect, 31 percent of fatal crashes in the state involved alcohol. After the law passed, in 2011, the rate declined to 28 percent. By 2012, though, the rate had bounced back to 31 percent.

These results surprised McClelland and Iselin, who had expected to find drunk driving instances decreasing. They suggested that heavy, problematic drinkers, who would be most effected by the price increase, did not cut their consumption, but switched to cheaper options.

“People might not react to taxes the way you think they will,” Iselin told the Tax Policy Center. “You need to anticipate all the ways they could respond, for example crossing state borders, if you’re trying to design policies that actually change behavior.”

However, when this type of analysis is applied to different states, the results vary widely. In New York, an alcohol tax increase in 1990 caused a 7 percent reduction in deaths from alcohol-related diseases. When taxes were raised on either beer or spirits, but not both, there was no such decrease. Meanwhile, in Alaska, tax increases in 1983 and 2002 were each credited with saving about 23 lives annually.

Over the course of the next two years, the tax cut would save alcohol producers $4.2 billion, though the cuts do have a firm sunset date. The cuts, which were first introduced by Democratic Senator Ron Wyden (D) in January and presented again by Ohio Senator Rob Portman (R), are particularly intended to help small brewers.

“This bill now gives the smaller companies much needed excise tax relief that will allow these entrepreneurs to reinvest even more in their businesses and into our communities,” said Portman’s spokesman. “Ohio is number four in the country in craft beer production. We like that. The industry now supports about 15,000 jobs, 61 new breweries have opened just last year alone in Ohio. This legislation is only going to promote the expansion and the jobs that come with these entrepreneurial small businesses.”

This could have a significant impact on the industry. Under the new proposed bill, a brewery making 10,000 barrels per year would save about $35,000 each year. This pro-job creation argument is borne out by a study from this summer, which found that a tax increase of $0.05 per drink would lead to hundreds of lost jobs around the country.

Historically speaking, alcohol consumption in the U.S. is down. Drinking peaked in the mid 1980s, when the average person consumed 12 drinks per week. Today, that number is closer to 10.