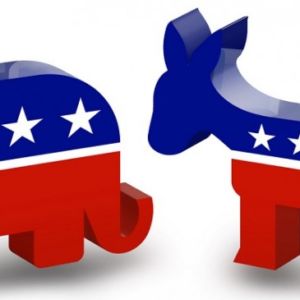 Will Democrats Follow Republicans in Splitting Party From Within?

If they want a cautionary tale, Democratic presidential candidates divided over health care, education costs, taxes and more might want to look back a baker’s dozen years in time.

In the dead zone between Christmas and New Year of 2006, it was quiet in Washington with lawmakers back home for the holiday break.

Then all hell broke out in the middle of my beat covering Washington for five South Carolina newspapers.

An unknown freshman senator named Jim DeMint made an audacious move: He blocked a massive omnibus spending bill, patched together only days earlier after months of partisan gridlock.

Unless $17 billion in “earmarks” were removed, DeMint said, the bill was dead.

No one outside of congressional appropriators and their aides had ever heard of earmarks. It was an inside term for pots of money designated for lawmaker’s special projects.

Just as significant, few had heard of Jim DeMint. Before his election to the Senate in 2004, he’d been a House backbencher and, before that, an undistinguished member of the South Carolina legislature.

So minor was his reputation, my editors balked at my early story pitches about his blocking the nearly half-billion-dollar appropriations measure.

What’s an earmark, they asked.

Who is Jim DeMint anyway, they objected.

Boy, did things change, and quickly.

By the time he left the Senate six years later, DeMint had compelled Congress to impose an earmark moratorium. More significantly, he’d raised tens of millions of dollars through his Senate Conservatives Fund, using the money to do the unthinkable: recruit and fund hard-right candidates who challenged — and defeated — Republican incumbent senators.

DeMint didn’t even spare his own state. He tried to kill funding for a new valve system that would spare suffering for 300,00 kidney dialysis patients across the country — which had been developed by a prominent doctor in his hometown of Greenville.

DeMint’s take-no-prisoners strategy for slashing government spending made him a hated man in the Senate, but also a deeply feared man. Several of his acolytes — Ted Cruz of Texas, Marco Rubio of Florida, Tim Scott of South Carolina and Mike Lee of Utah — remain in the Senate, continuing his crusade against all manner of federal spending.

In key ways, President Donald Trump is employing similar tactics today that made DeMint a hero among the core Republican base and earned him the nickname Senator Tea Party.

Trump’s hard-edged rhetoric against immigrants echoes that of DeMint, who said they cost Americans too much money, while the president’s mocking attacks on Obamacare repeat the South Carolinian’s claims that it was an extravagant boondoggle with a secret socialist agenda.

The bitter split that DeMint’s radicalism caused within the GOP has sealed, superficially at least, as congressional Republicans and other party leaders fall in line behind Trump in a concerted bid to keep the White House for another term.

The two candidates currently polling at the top of the race, former Vice President Joe Biden and Sen. Elizabeth Warren, disagree less on policies than on the scope and ambition of their policies.

Warren, whose catchphrase “I have a plan for that” signals her belief in government solutions to societal ills, ridiculed former Rep. John Delaney of Maryland for saying that Medicare for All and her other ambitious programs are “impossible promises” because they’re unaffordable.

“You know, I don’t understand why anybody goes to all the trouble of running for president of the United States just to talk about what we really can’t do and shouldn’t fight for,” Warren said to vigorous audience applause during the July 31 debate in Detroit. “I just don’t get it.”

Biden, though, took the too-costly handoff from Delaney during the next debate Sept. 12 in Houston.

Arguing that Medicare for All would cost the typical American taxpayer $5,000, Biden said his health-care plan to build on Obamacare while maintaining private health insurance would be much less expensive than Warren’s sweeping plan.

“My plan costs a lot,” Biden said. “But it doesn’t cost $30 trillion. That’s twice the entire federal budget before it exists now. How will we pay for it? I want to hear.”

Asked repeatedly whether her program would increase taxes, Warren declined to respond directly, saying instead that Americans’ overall health-care costs would decrease because there’d be no premiums to pay or annual deductibles to meet.

The divide among the Democratic candidates isn’t entirely new: Sen. Bernie Sanders of Vermont drew criticism in 2016 for failing to campaign enthusiastically for former Secretary of State Hillary Clinton once she became the party’s nominee because he deemed her too moderate.

Democrats who tell pollsters that defeating Trump this time outweighs all other goals can’t afford a repeat of that scenario next year.

Just as Republicans have united around Trump despite his fantastic lies and character flaws, Democrats must close ranks around their eventual nominee.

That means Biden will have to herald Warren’s expensive programs should she lead the ticket. And Warren will have to cheer Biden’s compromise alternatives if he ends up on top.

Put to the test will be their shared desire to defeat Trump at all costs, even if it means swallowing their primary-campaign criticisms and sounding more enthusiastic than they feel.