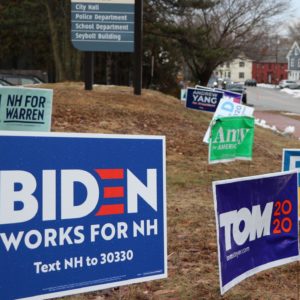 Will Dems Get Super Turnout on Super Tuesday?

“Around 528,000 South Carolinians turned out in the 2020 Democratic primary, a remarkable show of voter engagement compared to four years ago,” the Post reported. “Overall, South Carolina’s vote total was a massive increase over the 373,000 turnout for 2016 and nearly matched the votes cast in Obama’s 2008 primary win.”

This storyline also echoes the coverage immediately after the Nevada and New Hampshire contests, when Democrats declared their base was (as the Obama-era chant says) fired up and ready to go. But a quick look at the math shows Democratic turnout in the first four states was flat.

While Saturday’s 527,728 turnout sounds impressive, it only represents 15.8 percent of the eligible voters. In 2008, 23.7 percent of registered voters turned out for the Democratic primary, and more than 27 percent voted in the John McCain vs. George W. Bush GOP primary in 2000.

Saturday’s turnout was a bit higher than the Democrats’ 12.6 percent in 2016, but that was also the year that political newcomer Donald Trump helped pull more than 745,000 Palmetto State voters into the GOP primary.

There’s a similar story out of New Hampshire, where post-primary headlines trumpeted the raw turnout number as a new record, but overall turnout was less impressive. The 298,433 votes cast in the 2020 New Hampshire Democratic primary represented 42 percent of the potential vote (registered Democrats and unaffiliated voters), while in 2008 Democrats hit 47 percent.

In Iowa and Nevada, the raw turnout numbers fell well short of 2008, though both were higher than in 2016.

Once again, Democratic turnout hasn’t been bad. But it’s far below the expectations many Democrats had after 2018’s #BlueWave that flipped the New Hampshire legislature and put a Democrat in Rep. Mark Sanford’s seat in South Carolina.

“Am I worried about it? Yeah,” Obama advisor David Axelrod told the Daily Beast.

“That’s a danger for Democrats,” he said. “The Trump effort is infused with cynicism. And propagating cynicism can be a powerful tactic if you’re trying to depress an opponent’s turnout. That is a big concern that a dispirited electorate, beaten and burnt out, just walks away.”

Why aren’t Democrats setting records in the race to pick President Trump’s replacement? One theory is that the overwhelming number of choices is actually depressing turnout. Behavioral scientists call it “choice overload” or “the cereal aisle effect:” Give people too many choices to process and they will either opt out or take the first item on the list.

Some political pros believe this problem is particularly acute among more moderate Democrats who want to back the candidate most likely to keep Sen. Bernie Sanders from being their party’s nominee. With the anti-Bernie vote split between big-name candidates like Biden, Michael Bloomberg and (until Sunday night) Pete Buttigieg, these voters weren’t sure who to back. Some may have stayed home.

Now that Biden’s had his big South Carolina blowout, these voters will show up at the polls to join the bandwagon. In fact, that bandwagon effect is credited with contributing to the margin of Biden’s win in the Palmetto State.

The theory is that as he emerged as the clear anti-Sanders choice, moderate voters became more energized and turned out to support him.

On the other hand, voters have also shown that when they’re connected with a candidate, these other considerations don’t keep them from the polls. The perfect example is Donald Trump himself.

He’s set real turnout records for an incumbent president in both Iowa and New Hampshire (Nevada and South Carolina both canceled their GOP contests this year). In the Granite State, 113,969 Republicans (plus nearly 40,000 undeclared voters) turned out to vote in a meaningless GOP primary in which President Trump faced token opposition.

That’s 37 percent registered GOP turnout, in an effort that amounted to nothing more than mere cheerleading for their candidate.

“Impeachment has lit a fire under the Trump base — and I anticipate it will burn until Election Day in November,” former Minnesota Sen. Norm Coleman told Politico.

Meanwhile, Democrats wait to see if Super Tuesday turnout ticks up now that their primary appears headed toward a binary choice between Biden and Bernie Sanders. If turnout remains flat, the loser could be Sanders, who’s built his electability appeal on the claim that he can energize supporters to swarm the polls in the name of revolutionary change.

That revolution has yet to arrive.