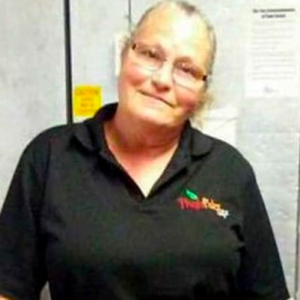 Should Fired “Free Lunch Lady” Be Next Candidate in Dem 2020 Primary?

A fired cafeteria worker in a small, rural New Hampshire community has become an international cause célèbre, making appearances on Good Morning America and getting job offers from celebrity chef Jose’ Andres.  But could her “free lunch” philosophy maker her a potential 2020 Democratic presidential candidate?

Bonnie Kimball worked the cash register at Mascoma Valley Regional High School in Canaan, NH until a manager discovered she let a student go through the line without paying.  Or as the headline at New England Cable News put it: “Lunch Lady Fired for Giving Free Lunch to Hungry Child.”

As the story developed, the details became more complex. According to her employer, Fresh Picks Cafe, their policy is not to deny any student in the lunch line a meal, so the claim that Kimball was fired for feeding a student is untrue.  However,  students who don’t pay are supposed to get a basic meal, not access to the premium ala carte items Kimball gave this student. 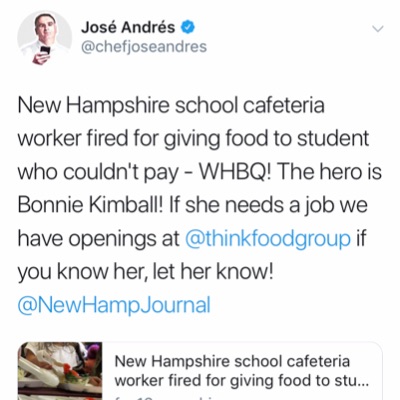 Kimball described the incident as a one-off and says she told the student to have his parents add cash to his account right away which, she says, they did the next day.

But in a statement posted on YouTube, the president of Fresh Picks Cafe accuses Kimball of lying to management, and that the student had been allowed to go through the line for three months without paying while Kimball worked. But, he added, “now that there’s a change in staff, this student’s account shows regular activity.”

Kimball’s former employer has offered to re-hire her with back pay, but she’s turned it down claiming the company is just trying to avoid bad publicity. Given the pummelling the company has gotten in the international press, it’s a little late for that.

Whatever the facts turn out to be, however, the Bonnie Kimball story offers an excellent metaphor for the current state of American politics and the 2020 Democratic presidential primary.

The old saying used to be “there’s no such thing as a free lunch.” Watching the 2020 Democratic primary thus far, the new approach appears to be “Of course there’s a free lunch–and if you don’t agree, you want children to starve!”

An unwillingness to support the Medicare For All proposal embraced by many Democrats is described as “denying health care to Americans who need it.”  Refusing to endorse the Green New Deal approach to climate issues is equated with either science denial, condemning the next generation to death (“Our lives are literally at stake”), or both.  The same is true for “free” college tuition, “free” daycare, etc.

Assume the Free Beacon’s off by 100 percent, her proposals still more than double total federal spending.  And while Warren has proposed a wealth tax (essentially a federal property tax on all assets held by the wealthy), it wouldn’t cover even a tenth of the new projected spending.

And yet there is only nominal pushback, particularly among Democratic primary voters and liberal-leaning media outlets.  It appears the candidates and their likely voters have embraced a political “Nike” moment– Just Spend It.

Now consider why Bonnie Kimball is a “hero” at Mascoma Valley Regional High: For giving away a lunch that someone else is going to have to pay for.

The problem is that 75 percent of public schools report they’re stuck holding the bag for students who use their cafeterias but don’t pay.  Public schools have to (pardon the pun) eat millions of dollars every year for parents who essentially skip out on their tabs at the local school lunchroom.

In some districts, it’s just a few dollars. In one, it was more than $800,000.  These aren’t poor families. If they were, they would qualify for the federal school lunch program, which extends all the way to 185 percent of the poverty level. (For a family of four, that’s more than $45,000 a year).

How much “free lunch” can a school afford? The small Warwick, R.I school system recently made headlines when it announced plans to give students with lunch debt sunflower butter and jelly sandwiches due to an outstanding balance of $77,000. A local businessman paid the bill to prevent the change in policy.

And consider the case of SAU6 in Claremont, NH. Last year the district began with more than $32,000 in lunch debt. When the school board began publicly considering a collection agency, private donors stepped up to wipe out the debt.

But wiping out debt isn’t the same as changing behavior. If anything, it encouraged students to keep eating and their parents to keep not paying. By Christmas, SAU6 was back to $20,000 in “free” lunch debt.

Were the lunchroom workers or school officials who allowed this debt to run up “heroes?”  Do the local property taxpayers–some of whom earn less than the families eating for free– think it’s heroic that they have to pick up the tab?

Defending the taxpayers means telling people who want free stuff “no.”  It means telling them they can’t have everything they want at other people’s expense. In other words, it means giving up any hope of being a major party’s nominee for President of the United States.

Nobody gets called a “hero” for saying no.