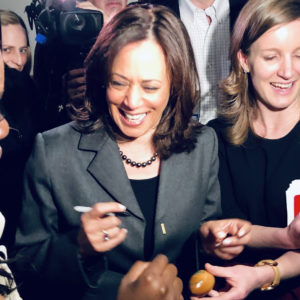 The conventional wisdom on picking a presidential running mate is “First, do no harm.” When it comes to holding on to New Hampshire in November, how did Joe Biden do by adding Sen. Kamala Harris (D-Calif.) to the ticket?

“She is a solid choice. She’s really personable, smart and funny,” says former N.H. Democratic Party chair Kathy Sullivan. “Everyone I know who met her here, or heard her spoke, really liked her. I think she helps.”

“I’m excited about the ticket, this is a winning team,” N.H. Democratic strategist Jim Demers told NHJournal. “Joe Biden is very well-liked in New Hampshire, and picking Kamala Harris makes this ticket feel a lot like 2008.”

“In a state that has elected some outstanding women, a Biden-Harris ticket will be very well received,” Demers added.

Perhaps. But while New Hampshire Democrats may have “liked” Biden and Harris, very few actually voted for either of them in the 2020 primary.

Biden finished fifth in the First in the Nation primary with just 8 percent of the vote, well behind the mayor of a small Midwestern town with a nearly unpronounceable name. On Election Day, Biden was in South Carolina before dinner, while New Hampshire was still voting.

But even Biden’s performance outpaced his new running mate. Harris began her campaign promising to “campaign hard in New Hampshire,” only to largely ignore the state before eventually dropping out of the primary before a single vote was cast.

New Hampshire Republicans seized on that as soon as the VP pick was announced.

“Remember that while Joe Biden left New Hampshire in the middle of our First-in-the-Nation Primary, Kamala Harris didn’t even bother to file for the New Hampshire Ballot in person,” NHGOP chair Steve Stepanek said in a statement. “With Joe Biden and Kamala Harris, there has never been a presidential ticket that has ignored New Hampshire so much.”

Republican National Committee co-chair Tommy Hicks echoed that message. “Biden and Harris turned their backs on New Hampshire, but President Trump has made this state a priority,” he told NHJournal. “And there is so much enthusiasm for the president here. He got 130,000 votes in the primary, more than doubling Obama and Bush’s totals [in uncontested elections].”

Do Democrats really care about how Kamala Harris campaigned? Probably not. Even if they do, they still like Biden/Harris a lot more than Trump/Pence.

Still, some Granite State progressives have indicated they aren’t exactly thrilled by the VP pick.

“I have zero words to describe how I feel about this. Zero. #VPPick,” tweeted progressive activist and Democratic state rep candidate Carlos Cardona.

“She’s not our favorite,” confessed North Country progressive Ted Bosen. “Mostly because she waffled on support for Medicare for All and the Green New Deal.”

“But we will hold our nose and vote Biden. We were holding it, anyway,” Bosen said.

Interestingly, progressive gubernatorial candidate Andru Volinsky — who rarely mentions Joe Biden or his campaign — hadn’t released any statement regarding the first-ever African-American woman on a presidential ticket as of Tuesday night.

His opponent, state Sen. Dan Feltes, embraced the news. “This is an amazing and historic VP pick! Erin and I, and our daughters Iris and Josie, look forward to seeing Kamala Harris serve as the next vice president of the United States of America. Let’s go win this!”

“She is the most on-brand pick Joe Biden could make given the type of campaign he’s run and how he has unified the Democratic Party since becoming the presumptive nominee. You can sell Kamala Harris to every part of the Democratic coalition: Progressives. African-Americans. College-educated women. Working-class women. She hits the sweet spot for what Joe Biden needs to accomplish.”

The Boston Globe’s James Pindell makes a similar argument, noting the ease with which Harris embraced, then abandoned, support for high-profile issues like Medicare for All and the Green New Deal. “What Biden requires in his running mate is someone who is politically flexible,” Pindell writes.

But is the candidate who can be everything to everyone the best pick to backstop a President Biden who, due to actuarial tables, is less likely to finish his first term than the average president?

How does Biden lose a race he’s currently winning?

Many political observers believe Trump’s best chance is if swing voters fear Biden won’t, or can’t, stand up to the extremism of his party’s progressive wing. These voters don’t like Trump, but they are afraid of seeing the politics of Rep. Ocasio-Cortez or cancel-culture extremists in the White House.

Will Kamala Harris stand up to these progressives? Or is she one of them? Based on her “flexible” policy record, it’s an open question. One the Trump campaign is already raising.

“In her failed attempt at running for president, Kamala Harris gleefully embraced the left’s radical manifesto, calling for trillions of dollars in new taxes and backing Bernie Sanders’ government takeover of healthcare. She is proof that Joe Biden is an empty shell being filled with the extreme agenda of the radicals on the left,” the Trump campaign said Tuesday night.

For the moment, Biden backers see nothing but upside.

“A great news day for Democrats,” says Lynda Tran of 270 Strategies. “Looking forward to seeing these two paired up on the real or virtual campaign trail in the weeks ahead.”