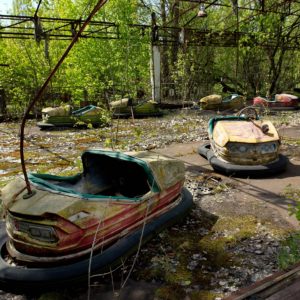 The official, government death toll of the Chernobyl nuclear explosion is 31. That number has not changed since 1987.

The actual number remains unknown, but it is estimated between 4,000 and 93,000. The 31 who died were plant workers, firefighters and other emergency responders. More than 600,000 people were conscripted by the Soviet government to work what’s known as the Exclusion Zone, which encompasses 2,600 square kilometers, but no records were kept about their health despite accounts of radiation sickness and death. Across Belarus and Ukraine, where Chernobyl was located, there were dramatic spikes in cancers, particularly among children.

The real legacy of Chernobyl, according to the creator of a well-received HBO limited miniseries, is the secrets and lies told by those in control of the Soviet Union.

“The lesson of Chernobyl isn’t that modern nuclear power is dangerous,” tweeted series creator Craig Mazin. “The lesson is that lying, arrogance and suppression of criticism is dangerous.”

But the message that nuclear power is dangerous is being raised by anti-nuclear activists who viewed the miniseries as a profound demonstration of what they’re fighting.

“[T]his meticulously researched dramatization brought home the true extent of the enduring devastation the accident caused to lives, health and the environment,” said Linda Pentz Gunter, an international specialist with Beyond Nuclear. “It will be up to U.S. viewing audiences to see past issues such as ‘Soviet’ reactor designs and to understand that something like this could happen again anytime, anywhere, and to them and their families.”

For a generation that is learning about the horror of Chernobyl through this miniseries and for whom the partial reactor meltdown at Three Mile Island is all but unknown, the HBO show can be frightening. That’s why it’s important to understand how an incident like Chernobyl could never happen in the U.S specifically because of the domestic industry and federal and state governments’ strict reporting requirements, said a spokesman for the Nuclear Energy Institute.

“People who don’t like nuclear always pick up on dramas like this,” said Matt Wald. “We like looking over each other’s shoulders. In the U.S., failing to be in touch with the operating experience is a sin; in the Soviet Union, it was a crime. There’s limited relevance [from Chernobyl to the U.S. It reconfirmed the idea that we have to pool our information.”

The largest and most well know nuclear incident in the U.S. happened at the Three Mile Island plant near Harrisburg, PA, in 1979 when one of the reactors suffered a partial meltdown. Although there was a radiation leak, there were no reports of adverse health effects based on several epidemiology studies, including two of the most notable published in the American Journal of Epidemiology and by the National Institutes of Health.

Three Mile Island was a completely different event from Chernobyl, primarily because of the kind of reactor that was being used. In fact, one of the central points made by the lead scientist in the HBO production was that the type of reactor at Chernobyl – an RBMK – was “cheaper.” The Soviet Union was the only country in the world that used the RBMK reactor because its problems and shortcomings were well known, according to the Nuclear Energy Institute. That information, though, was kept from plant operators, which is part of the secrecy condemned by the miniseries.

Still, activists like Shaun Burnie, a senior nuclear specialist with Greenpeace, look at nuclear power as irrelevant and are working to phase it out from every country’s energy plans. Despite nuclear energy being emission free, Burnie scoffed at suggestions that it should be part of the fight against climate change.

(InsideSources has reported on efforts by nuclear power plant operators threatening to shut down reactors unless they receive state subsidies and can access clean energy tax credits that are usually reserved for wind and solar operators.)

Burnie called the information distributed by industry actors and pro-nuclear power groups distributed in advance of the show as “shill pieces.” The Nuclear Energy Institute produced several informative fact sheets and papers, including one that delved into the relevance of Chernobyl outside of the Soviet Union and the consequences of the accident. The World Nuclear Association has also updated its fact sheet on “The Safety of Nuclear Reactors.”

Regardless of the perception of nuclear power from the 8 million people who watched the HBO series, nuclear power proponents say that it must be part of the climate solution since it is clean.

“The only way you get to even a realistic approach to get to carbon free, you have to have nuclear power,” said U.S. Rep. John Shimkus (R-IL), top Republican on the Environment & Climate Change Subcommittee for the House Energy and Commerce Committee. “There’s consternation in the environmental community and a lot of talk. We’ve seen folks start to accept the premise that if we really want to go carbon free, we have to have nuclear power.”