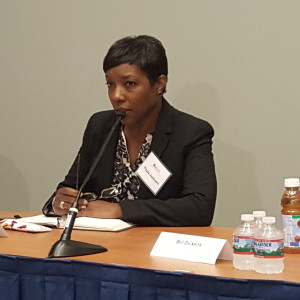 The Congressional Black Caucus Foundation’s Annual Legislative Conference was held in Washington this past week, and on Friday, a panel discussed how domestic energy production has impacted communities of color. While the panelists suggested that these effects are often overlooked, they argued that continued growth in the energy sector would bring economic gains to minority communities.

The House Energy and Commerce Committee voted on Thursday to send a bill to the House floor that would lift the 1970s-era ban on exporting crude oil. The full House will likely vote on the bill in the coming weeks, and the potential impact of the legislation was a major focus for the panelists.

According to Ricardo Byrd, executive director of the National Association of Neighborhoods, who moderated the event: “The good news is that it appears energy legislation ending the ban on crude oil exports is finally moving forward on Capitol Hill. My goal is to see that communities of color fully benefit from our nation’s energy abundance. Changing America’s energy policy to allow crude oil exports would go a long way towards creating a long overdue economic renaissance in our poorest rural and urban neighborhoods.”

While the legislation has the backing of many Democrats in Congress, as well as former economic advisers to the president, the White House has indicated it supports the current export restrictions. Some Democrats have said lifting the ban would be a handout to the big oil companies.

Paula Jackson, President and CEO of the American Association of Blacks in Energy, worked to dispel that claim. She explained that the idea that it is just the oil companies that would benefit is a misnomer. Lifting the export ban would be a boost to employees and help the economy grow, she said. “Companies that don’t make money don’t survive. Those employees and those communities suffer.”

Margo Thorning of the American Council for Capital Formation pointed out that oil companies often face criticism when they’re in the press for high profits. Thorning cited research that oil company profit margins are low compared to other industries because of high compensation for employees, operating costs, and required capital investments.

Research from leading think tanks, including the Brookings Institution and Aspen Institute, finds significant economic benefits in lifting the export ban. America would gain 200,000-400,000 new jobs, the economy would grow by $600 billion to $1.8 trillion, and consumers would save $5.8 billion per year in energy costs.

Jackson argued that many of these gains would benefit communities of color. She noted the proximity of Philadelphia to the Marcellus Shale and New Orleans as a major export hub.

For those concerned about the potential environmental impact of increasing American energy production, the panel took note of the higher environmental standards in the U.S. and the potential to displace oil and coal coming from countries with lax regulations.